To The Moon and Beyond! Experience The Bentway’s Fall 2019 Season 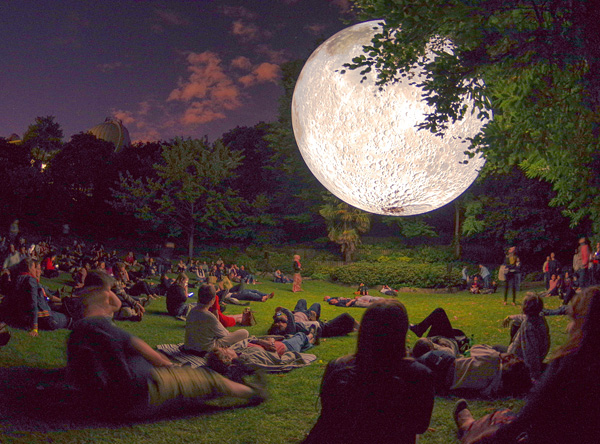 The Bentway is an innovative public space project underneath Toronto’s Gardiner Expressway. Our Fall 2019 programming calendar explores the theme of Second Nature and brings together artists, community activists, urbanists, scientists and innovators to explore ways urban dwellers can reconnect to the natural world. Anchored by Museum of the Moon, events and activities include The Bentway’s Community Incubation Program, collaborative partnerships with Nuit Blanche and the Toronto Biennial of Art, and much more.

Opening September 10: Vertical Intersections with IDITA
A series of vertical gardens surrounding the columns of the Gardiner Expressway at The Bentway, created by IDITA, a design studio run by multidisciplinary designer and creative Diana Guzmán Valencia.

September 10-15: Museum of the Moon
A week-long celebration of the moon and its impact on our daily lives, featuring Luke Jerram’s Museum of the Moon installation. Additional programming includes moonlight meditation, lunar stories, films, astronomy talks, stargazing, and live performances.

September 18: Nuit Talks: Art, The City Builder
Explore how artists address critical issues facing urban environments. Topics of conversation include access to space, building community and the pressing challenge of affordability that shapes our city. This event will include a performance by Francesca Chudnoff and panel discussion with Max Dean and Nuit Blanche curators Layne Hinton and Rui Pimenta, moderated by Shawn Micallef.

September 21: Toronto Biennial of Art: Sinaaqpagiaqtuut/The Long-Cut
Presented in conjunction with Embassy of Imagination + PA System’s installation at 259 Lakeshore Boulevard East, Sinaaqpagiaqtuut/The Long-Cut is a procession that began in Kinngait (Cape Dorset, Nunavut) and continues in Toronto. The procession is performed and features works by Kinngait youth from Peter Pitseolak High School made in collaboration with the Oasis Skateboard Factory School in Toronto. Members of the public are invited to witness the performance and are welcome to respectfully follow behind the procession, while reflecting on their own relationship to place.

September 29: Bellwoods to Bentway Park Crawl with David Suzuki Foundation
A butterfly-filled musical spectacle, including a kid-friendly parade from Trinity Bellwoods Park to The Bentway with music led by local musicians Ben Lee and Kasey Dean Skiora, stopping at Stackt, and concluding at The Bentway with entertainment, local vendors, and food and drink.

October 3: Blue Guerrilla: Lost Rivers and Found Stories with Toronto Green Community
A walk, presented by Lost Rivers and Rivers Rising, that will teach participants about the multiple creeks that once flowed throughout The Bentway neighbourhoods and the told and untold stories about these bodies of water and the people who lived near them.

October 5: Nuit Blanche Toronto: Creation : Destruction
The Bentway will be a location hub for Nuit Blanche Toronto this year, as part of the exhibition Creation : Destruction, curated by Layne Hinton and Rui Pimenta (Toronto), the curatorial duo behind Art Spin. The projects use the geography of the site as a way to explore the cycles of creation and destruction in nature and beyond.

October 10: Blue Guerrilla: Building Earth-friendly Landscapes with Toronto Green Community
Facilitated by RAINscapeTO, an eco-landscaping service based in Toronto, participants will take part in the installation of a raingarden in the Bentway. This demonstration workshop will highlight easy steps that patrons can implement at home to reconnect with the land, protect the lake, attract pollinators and even grow food – whether they live in a house or in a condo.

Explore nature in the city with The Bentway this Fall!

The Bentway is a fully accessible public space.