The Supercake & Oversize, Overdue: The Architecture of the D.B. Weldon Library 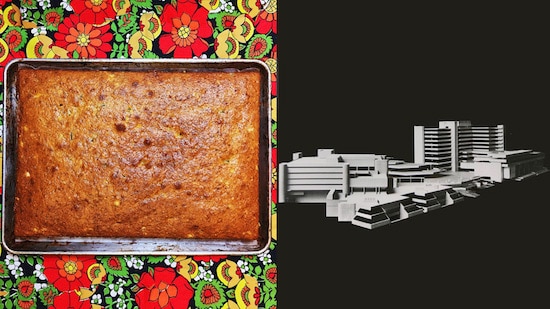 The Supercake may be the largest handmade banana cake ever produced in southwestern Ontario. For the past three years, artist Eugenio Salas has worked with other new Canadians at an industrial bakery, where, Salas notes: “We spend more time with each other than with our own families and have developed strong bonds. Despite our differences, we share migration histories and an appreciation for food. During break time and at social events outside work, sharing food brings us together.”

The Supercake reimagines the production line and reconfigures production logic as a way to reclaim artistic agency for Salas and his colleagues. Having set the working conditions for the Supercake’s production, they then collectively determined the flavour, ingredients, decoration, and its presentation to the public. Troy Hourie, a Toronto-based installation artist and set designer, got involved to help with the pubic installation of the cake at a local church hall, a traditional venue for community events and collaborative cooking.

Please join us for cake at this free, public event, which is wheelchair accessible and has free parking.

The Supercake is part of Salas’s participatory, process-based project Breaktime/Overtime. It critically examines the culture of food factories, a growing industry in London, Ontario.

About the artist:
Eugenio Salas was born in Mexico City and is currently based in London, Ontario, Canada. By disrupting social roles and dynamics through process-based projects, Salas examines the symbolic places and social environments that unfold as a result of artistic collaboration. He carries out participatory performative actions employing media, print, and cooking. Salas’ previous projects include Snack Pack, a doughnut-based stop-motion animation work reflecting on his first Canadian job as a new immigrant; Tunnel, a sculptural project involving the construction of a tunnel inside an art gallery with a non-status construction worker and gallery curator; YYZGRU, a parcel delivery system designed to exchange personal objects between Brazilians in Toronto and their families back home; and Social Plastics/Nail Party, a participatory performance in a nail salon in collaboration with an immigrant family of nail technicians. Salas owns Papancho’s, an artist-run catering company.

About the set designer:
Troy Hourie is an installation artist and scenographer who has worked on over 300 productions for various off-Broadway, regional and opera companies across the USA, Canada and abroad, including Glimmerglass Festival, The New Victory, New York Theatre Workshop, Cherry Lane Theatre, Brooklyn Academy of Music, The Guthrie, and The Classical Theatre of Harlem.

Brutalism is arguably the most revered and reviled of architectural styles. In recent years, it has enjoyed a resurgence of interest among a new generation of architects, designers and urban types. They find its authenticity, material integrity and volumetric forms are refreshing after years of theatrical, pseudo-historical, post-modernism, and that which followed.

At Western University, a legacy of colonial aspirations has resulted in a campus largely built in what is called the “Collegiate Gothic” style. The building of Weldon Library was part of a brief, visionary interlude of utopian modernism that envisioned new, big and boldly egalitarian public spaces that provided access to education for all. Now, many modernist buildings like Weldon Library are threatened by deterioration and even demolition. Altered beyond recognition by perfunctory repairs and renovations, it is difficult to imagine the ways in which such monumental buildings represented the lofty social values of this particular time period.

Initiated in Canada’s centennial year, the design of a new main library for Western University was a collaboration between architects Ronald E. Murphy (1924-1992) of London and Australian John H. Andrews (born 1933), who also designed the University of Toronto’s Scarborough College and the CN Tower. This design occurred within the rapid expansion of post-secondary education in Canada, concurrent with the architecture of the 1967 centennial commemoration, and as part of the emergence of the “third generation” of modern architects in the international context.

About the speaker:
James Ashby, a conservation architect and independent scholar, focuses on the built heritage of the modern era and its continuity into the future. He has worked in the private and public sectors in Canada, and in the non-profit sector in the United States. Ashby has advised on several nominations of modern built heritage to the UNESCO World Heritage List. He benefitted from a residency at The Getty in Los Angeles as a guest scholar. Based in Ottawa, Ashby has lectured widely and his writing has been published in journals in North America, Europe, and Asia.

This lecture has been organized by McIntosh Gallery in collaboration with Weldon Library, Western University.