Power in Resistance exposes voices of resistance and resilience that flourish throughout the Americas as a response to centuries of racism, poverty, and widespread economic and social exclusion of Indigenous peoples in the region. From the southern hemisphere of the Mapuche to the Cree in the north, artists in Power in Resistanceaddress the impact of colonization, including forced sterilization, risk of language extinction, residential schools, shaming queer identities, and violence. Counteracting such attempts of cultural erasure, artists continue a path of truth, acknowledgment, power and transformation. 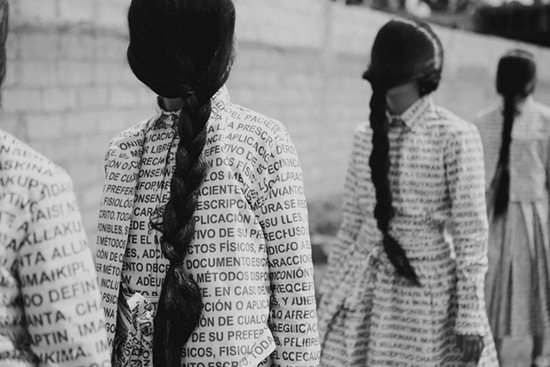 MARILYN BOROR is a Maya-kaqchikel artist from San Juan Sacatepéquez Guatemala with a BA from the University of San Carlos de Guatemala. Boror has received awards and scholarships for her artistic work and has participated in conferences and residencies in Central America and in Spain. Boror exhibited at the Doroteo Castillo Novella at the NUMU New Museum of Contemporary Art of Guatemala, 2019; Biennial of the South -Pueblos en Resistencia in Venezuela, 2017; Guatemala from 33,000km Museum of Contemporary Art Santa Bárbara California, 2017; XX Biennial of Art Paiz Ordinario-Extraordinario, 2016; XIX Biennial of Art Paiz TRANS / VISIBLE, 2014; FIA -Festival Internacional de las Artes– Costa Rica, 2011; among others. Boror teaches at the Municipal School of Visual Arts and is a consultant for projects in rural areas in Guatemala.

SEBASTIÁN CALFUQUEO is a Mapuche artist born and based in Santiago, Chile. Calfuqueo is a PhD candidate in Visual Arts at the University of Chile. Calfuqueo has had solo exhibitions in Chile at the Galería Metropolitana, Galería D21, Galería Bech and the Museo de Arte Contemporáneo. He has participated in group exhibitions at: La Paz Biennial in Bolivia, Lundl Konsthal in Sweden, D21 Gallery Leipzig in Germany, and extensively in Chile at the Centex Valparaíso, Matucana 100, Centro Cultural Gabriela Mistral, Museo de la Memoria y los Derechos Humanos, Museo de Arte Contemporáneo Parque Forestal, among others. In 2016, Calfuqueo received the Talento Joven Award from Fundación Mustakis y Balmaceda Arte Joven, with a book publication of his work.

CARLOS COLÍN was born in Guadalajara and presently works and lives between Mexico City and Vancouver. Colín is currently a PhD candidate in an Interdisciplinary Studies Graduate Program at UBC and is represented by Fazakas Gallery in Vancouver. He has participated in exhibitions at the Grunt Gallery in Vancouver, the Galería de la Raza in San Francisco, the Art Gallery of Greater Victoria, and the Biennial of Painting Rufino Tamayo in Mexico City, among others. In 2016, Carlos received the Mayor’s Arts Awards of the City of Vancouver as Emerging Artist in the category of Visual Arts; the 2017 Artist Studio Award Program; and in 2018 received the Canada Council for the Arts grant in Research and Creation.

LUCIA CUBA is a Peruvian, New York-based artist with an MFA in Fashion Design and Society from Parsons School of Design and a BSc in Social Psychology from Cayetano Heredia University in Peru. Cuba’s work has been exhibited at the Boijmans Van Beuningen Museum in Rotterdam, the Museum of Arts and Design in New York, at Museo Amparo in Puebla, the Albuquerque Museum in New Mexico, the OCT Art & Design Gallery in Shenzhen and at BRIC Arts Media in Brooklyn. Cuba received a Fulbright Scholarship, the Design for Development Award at the Iberoamerican Design Biennale and the Han Nefkens Fashion on the Edge Award. She currently works as an Assistant Professor of Fashion at Parsons School of Design.

Born in Ottawa MERYL MCMASTER earned a BFA in Photography from OCAD University. Her work has been exhibited at the National Gallery of Canada, Art Gallery of Ontario, Montreal Museum of Fine Arts, Art Gallery of Greater Victoria, The Eitjlorg Museum of American Indians and Western Art, and the Smithsonian’s National Museum of American Indian, among others. A selection of awards include: the Scotiabank New Generation Photography Award, REVEAL Indigenous Art Award, Canon Canada Prize, and the 2016 Sobey Art Award long list. Her work is in collections in Canada and the United States.

TAMARA TOLEDO is a Toronto-based curator, writer and artist, graduate of OCAD University and holds an MFA from York University. Toledo has curated numerous exhibitions and has presented her work at various conferences in Montreal, New York, Vancouver and Toronto. Her writing has appeared in ARM Journal, C Magazine, Fuse and Canadian Art.

Sur Gallery is Toronto’s first gallery space dedicated to the exhibition and critical engagement of contemporary Latin American art and is a project of LACAP.

Sur Gallery acknowledges the financial support of the Canada Council for the Arts, Ontario Arts Council, Toronto Arts Council, and The City of Toronto through section 37.

Sur Gallery is Toronto’s first gallery space dedicated to the implementation of art projects, which showcase and promote contemporary Latin American artistic practices. Initiatives are aimed to socially innovate, critically engage, lending itself to opportunities of national relevance in order to begin to develop global networks of exchange. Sur Gallery is a project of LACAP-Latin American Canadian Art Projects.