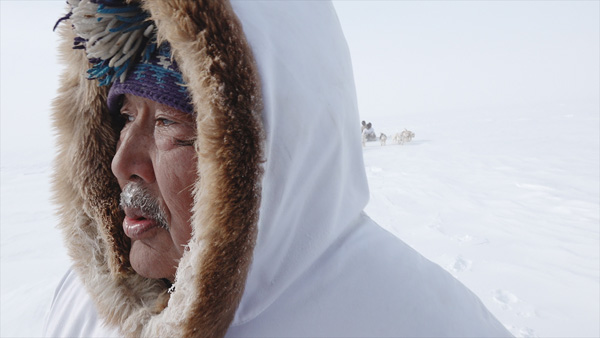 One Day in the Life of Noah Piugattuk, 2019. Courtesy of Isuma Distribution International

The Department of Visual Arts at the University of Ottawa, in collaboration with the National Gallery of Canada is proud to present the work of artist collective Isuma for the fifth annual Stonecroft Foundation Visiting Artist Lecture on Thursday, November 14th, at 6 pm in the Gallery Auditorium. Isuma, meaning “to think” or “a state of thoughtfulness” in Inuktitut, is Canada’s first Inuit video-based production company. Their most recent film “One Day in the Life of Noah Piugattuk,” will be screened at the event, followed by a discussion with assistant director and Isuma member Lucy Tulugarjuk and artist and curator Asinnajaq.

This lecture series is made possible thanks to a significant gift from the Stonecroft Foundation for the Arts, in support of contemporary art discourse. The annual Stonecroft Foundation Visiting Artist Lecture Series, in collaboration with the Gallery, allows the public to discover prominent Canadian artists’ practices.

Isuma is representing Canada at the 58th International Art Exhibition – La Biennale di Venezia 2019. The artist collective was co-founded in 1990 by Dr. Zacharias Kunuk, Norman Cohn, Paul Apak Angilirq (1954-1998), and Pauloosie Qulitalik (1939-2012) to preserve Inuit culture and language and to present Inuit stories to Inuit and non-Inuit audiences around the world.

Film synopsis: In April 1961, John F. Kennedy is America’s new President, the Cold War is heating up in Berlin and nuclear bombers are being deployed from bases in arctic Canada. In Kapuivik, north Baffin Island, Noah Piugattuk’s nomadic Inuit band live and hunt by dog team, as his ancestors did when he was born in 1900. When the white man known as Boss arrives at Piugattuk’s hunting camp, what appears as a chance meeting soon opens up the prospect of momentous change. Boss is an agent of the government, assigned to get Piugattuk to move his band to settlement housing and send his children to school so they can get jobs and make money. But Kapuivik is Piugattuk’s homeland. He takes no part in the Canadian experience, and cannot imagine what his children would do with money.

Lucy Tulugarjuk is an actor, creative performer, and the Executive Director of Nunavut Independent Television Network (NITV). Born in Churchill, MB, and raised in Igloolik and Sanirajak (Hall Beach), Nunavut, Lucy is well-known for her award-winning performances in feature films, including “Atanarjuat: The Fast Runner”, which won the Camera D’Or and Genie Award for Best Picture in 2002. In 2001, she was awarded the Best Actress Award from the American Indian Film Institute, San Francisco. She is the co-writer and director of the 2018 feature film, “Tia and Piujuq”, which premiered at the Carrousel Children’s Film Festival and the Boston Kid’s Film Festival in 2018, and assistant director for Zacharias Kunuk’s most recent film “One Day in the Life of Noah Piugattuk” (2019), which won “Best Canadian Film” at the 2019 Vancouver International Film Festival. In addition to her work in film and television, Lucy is a skilled Inuktitut translator and throat singer.

Asinnajaq is a visual artist, filmmaker, writer and curator based in Montreal, QC. Asinnajaq’s practice is grounded in research and collaboration, which includes working with other artists, friends and family. In 2016 she worked with the National Film Board of Canada’s archive to source historical and contemporary Inuit films and colonial representations of Inuit in film. The footage she pulled is included in her short film “Three Thousand.” The film was nominated for Best Short Documentary at the 2018 Canadian Screen Awards by the Academy of Canadian Cinema & Television. Asinnajaq is part of the curatorial team for the Canadian Pavilion at the 2019 Venice Biennale.

The film has English subtitles and the discussion is in English. Open to the public. Free of charge. Limited Seating. Venue is wheelchair accessible.

About the University of Ottawa
The University of Ottawa is committed to research excellence and encourages an interdisciplinary approach to knowledge creation. The Department offers attentive teaching and mentoring within a close-knit university community, while also encouraging student interaction with a broad network of art institutions and professionals. For more information, visit Department of Visual Arts.

University of Ottawa MFA Visual Arts
In this bilingual two-year program students take an in-depth look at theories informing contemporary art and image culture. The Professional Internship course, in which students have the opportunity to work at one of the many art institutions in the region, or with a professional artist, is a distinctive feature of our program. Students are given private studios and funding opportunities are available.

The Deadline for Application to the Program is January 15. Click here for more info