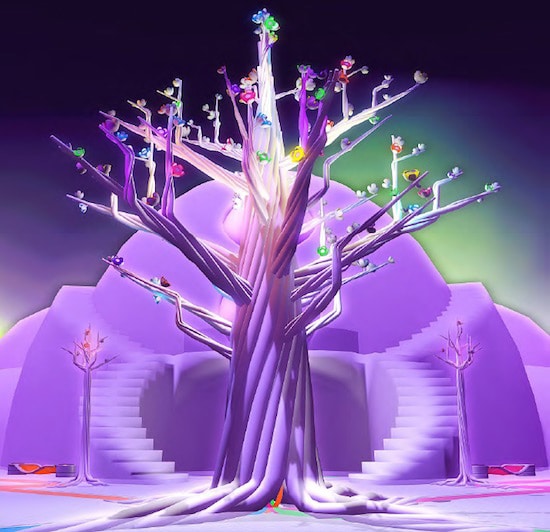 Skawennati, Celestial Tree: She Falls For Ages, 2017. Image courtesy of the artist.

In From Sky World to Cyberspace, artist Skawennati (Mohawk, turtle clan) traces a line from our place of origin somewhere in the heavens to the virtual realm, one of the newest territories on Earth. Investigating concepts of time and self, Skawennati engages various mechanisms of gaming and play, interweaving traditional Mohawk stories and ritual objects with new technologies and processes through representations of avatars, most notably her online persona which she has maintained for over a decade in the virtual world, Second Life. From Sky World to Cyberspace is a result of Skawennati’s continuing investigation of cultural construction, contemporary Indigenous self-representation in cyberspace, and of our relationships with the digital world.

About the artist:
Skawennati makes art that addresses history, the future, and change from an Indigenous perspective. Her innovative new media projects include the online gallery/chat-space, and mixed-reality event, CyberPowWow(1997-2004); a paper doll/time-travel journal, Imagining Indians in the 25th Century (2001); and TimeTraveller™(2008-2013), a multi-platform project featuring nine machinima episodes. These works and others have been presented in New Zealand, Germany, Italy, Ireland and across North America in major exhibitions such as Now? Now! at the Biennale of the Americas and Looking Forward (L’Avenir) at the Montreal Biennale. Skawennati is represented by ELLEPHANT and her award-winning work is included in both public and private collections. Born in Kahnawà:ke Mohawk Territory, Skawennati holds a BFA from Concordia University in Montreal, where she is based. Currently, she is Co-Director, with Jason E. Lewis, of Aboriginal Territories in Cyberspace (AbTeC), a research network of artists, academics, and technologists investigating, creating, and critiquing Indigenous virtual environments. 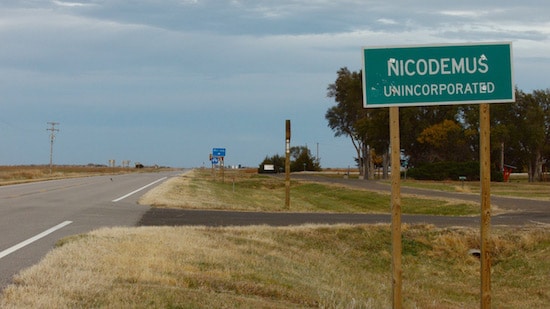 Deanna Bowen, We Are From Nicodemus, video still, 2017. Image courtesy of the artist.

In We Are From Nicodemus, Deanna Bowen traces threads of her family history as it relates to historical accounts of African American migration from the Midwest to the Canadian Prairies. The installation, first shown at the Royal Ontario Museum as part of The Family Camera exhibition (2017), explores intersections between photography and migration and recovers a history of struggle and emancipation. The video documents Bowen’s first meeting with her cousin, Angela Bates, with whom she connected after finding a photograph of Angela’s grandmother, Elizabeth Risby Williams, during her genealogical research. Through a series of interviews presented in eight episodes, she builds connections with extended family members, recovering stories of her family’s migration from Nicodemus, Kansas to Campsie, Alberta in the early 1900s.

About the artist:
Deanna Bowen is an interdisciplinary artist based in Toronto. She is a descendant of African Americans who migrated from Kansas to Alberta, Canada, over one hundred years ago, and her research-based practice explores counter narratives of slavery and migration. Bowen holds a Master’s Degree in Visual Studies from the University of Toronto (2008) and is a graduate of the Emily Carr College of Art and Design (1994). She is the recipient of numerous awards, including a Guggenheim Fellowship (2016) and the William H. Johnson Prize (2014). Her work has been exhibited and screened in Canada and internationally.

Western University is situated on the traditional territories of the Anishinaabeg, Haudenosaunee, Lunaapeewak and Attawandaron peoples who have longstanding relationships to the land and region of southwestern Ontario and the City of London. The local First Nation communities of this area include Chippewas of the Thames First Nation, Oneida Nation of the Thames, and Munsee Delaware Nation. In the region, there are eleven First Nation communities and a growing Indigenous urban population. Western University values the significant historical and contemporary contributions of local and regional First Nations and all of the Original peoples of Turtle Island (North America).