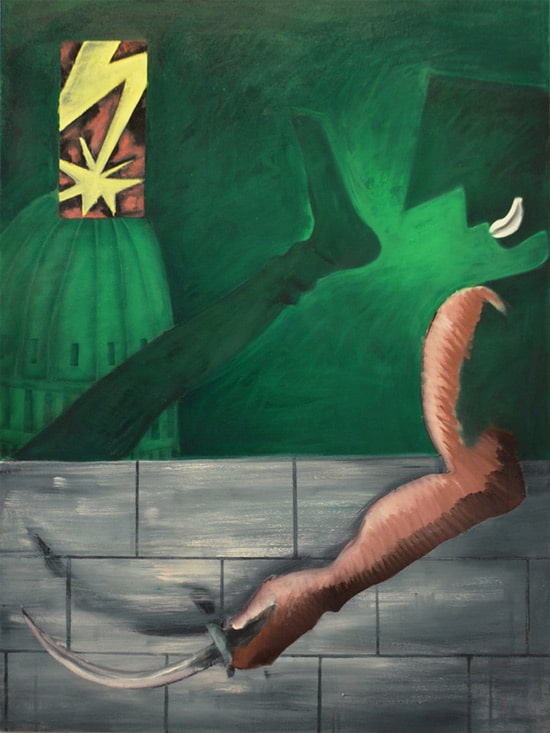 For Waterloo-born, Brooklyn based artist geetha thurairajah, form is a slippery precursor to meaning. Her paintings begin as digital renderings, often composed of a surreal mix of symbols and visual quotations. Figures appear as fragments and shadows that refuse to stay confined to traditional compositional boundaries. The conical shape of a mahout’s hat appears throughout several of the works, suggesting both a personified other and the spectre of cultural caretaking.

thurairajah conjures the image of the trickster, a shapeshifting rebel who can be found in fables and origin narratives from cultures all over the world. By entangling concepts of the familiar and the foreign, thurairajah encourages us to see the symbolic potential inherent in images: regardless of where they are sourced and by whom they are seen.

Currently based in Brooklyn, New York, geetha thurairajah earned a BA from Wilfrid Laurier University (2010) and a BFA from the Nova Scotia College of Art and Design (2014). She was a finalist in the RBC Canadian Painting Competition in 2016 and 2018 and received an Honourable Mention in 2018. Her work has been exhibited internationally, and has been included in recent group exhibitions at The Power Plant and Oakville Galleries.

Join us on Friday 29 March at 7:00 pm to celebrate the opening of Migration is more momentous than ancient invasions with a free Artist Talk featuring geetha thurairajah, to be followed by a public reception for the artist at 8:00 pm.

Artist Talks at KWAG are kindly supported by Momentum Developments and Sorbara Law.

Walk the Talk: Gallery Tours: Free guided tours will be offered on Thursdays 4 April, 2 May and 6 June from 6:30-7:30 pm. Sponsored by the Gamble Family.

Culture Talks with Heidi Reitmaier: Join us on Thursday 11 April at 6:30 pm for an inspiring evening’s conversation on the opening of the new MOCA Toronto with former Executive Director and CEO Heidi Reitmaier. Presented at The Walper Hotel in partnership with Perimeter Development Corporation. Visit our website to learn more and purchase tickets.

Feast for the Senses 9: An evening of art, food and drink inspired by works of art in our current exhibitions, this culinary adventure on Thursday 16 May will feature a five-course tasting menu prepared by Chef Brian McCourt of Kitchener’s Ignite Restaurant Group. Tickets go on sale Monday 25 March!

Free admission to all exhibitions is sponsored by Sun Life Financial.

The Kitchener-Waterloo Art Gallery respectfully acknowledges that we are located on the traditional territory of the Attawandaron (Neutral), Anishinaabeg and Haudenosaunee peoples. The Haldimand Tract, land promised to Six Nations, includes six miles on each side of the Grand River.