Kingsburgh & Griffin riff on the mutable natures of fire and earth as markers of time.

Kingsburgh pairs Neolithic rock engravings of spirals and cups from the Kilmartin Valley in western Scotland, with spirals traced by subatomic particles in bubble chamber images. The common circular forms speak at a visceral level to something deep within the human psyche.

Some rocks in the Kilmartin Valley are etched on, others are arranged as standing stones linked to celestial time kept by the Sun and Moon. The circles and spiral forms somehow connect the celestial timescales to the human cycle of life and death.

The ancient drawings next to the cracks and crevices etched into the rocks by deep time contrast with the fleeting moment etched by subatomic particles passing through a bubble chamber. Macro plays with micro. The human timescale lies somewhere in between, yet is connected to both.

Griffin makes drawings of fire. But how do you draw fire? It is an object with no surface. Does it have volume? It is more than just vapor but less than solid. Fire flows at absolute zero, and glows in the transformations of the sun. It is chemistry and poetry at once. Fire is a thing that exists on the edge of chaos and order. Everything it touches is utterly changed, its energies violently translated into ash by the licking flame. Flickering between reality and language, fire is an existential threshold, the end of what we know.

Bios:
Robin Kingsburgh is a trained astronomer (Ph.D. in Astronomy, 1992, University College London). Her artistic education comes from studies at University of Toronto, as well as in the U.K. and France, and has paralleled her scientific development. She currently teaches various Natural Science courses at York University, Toronto. Her scientific background influences her artwork in an indirect, subconscious way, where she employs geometric motifs as a frequent theme. She is a member of Propeller Gallery, where she shows her artwork on a regular basis.

Dr. David Griffin is a multidisciplinary artist working with painting and drawing, graphic music notations, and performance. He has exhibited his artwork both nationally and internationally, is an instructor at OCAD University in Toronto, and holds a PhD from the Glasgow School of Art. The artist’s creative practice and theoretical writing focus on notational drawing as a hybrid document and connotative system, through which we may construct innovative performance practices. 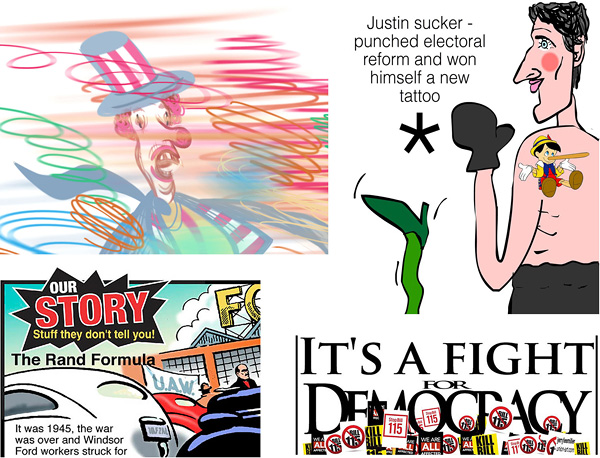 Comic and political art presented by Michael Zaharuk and The Union Art Service, a co-operative of progressive political cartoonists and graphic artists operating since 1977.

Bio:
Michael Zaharuk is an artist, illustrator and political cartoonist. His work has been exhibited in galleries across Canada, Spain and the USA. His Illustration work has appeared in publications such as: The Chicago Tribune, Governing Magazine, The Houston Press, The Progressive, The Toronto Star, University of California Magazine, The Washington Post and The Wall Street Journal, among others. His political Cartoons have been published throughout North America and are syndicated by Artizans Entertainment and The Union Art Service. He has worked as a production illustrator and storyboard artist for live action and animated productions. Michael currently teaches Illustrative Activism at the Ontario College of Art and Design University and Storyboarding and Illustration at George Brown College.