…any resemblance to real persons, dead or alive, is purely coincidental. 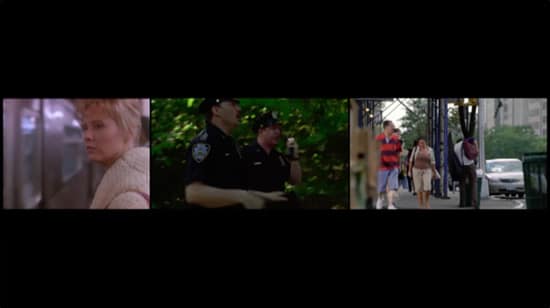 Vtape is pleased to welcome guest curators shell curatorial collective led by Maegan Broadhurst + Barbora Racevičiūtė who present a series of artworks that reflect on, engage with, pose questions to and/or regard sceptically television itself. In considering how central television was to the emergence of video art in the late 1960s – both the content of real broadcast television and the idea of television and its ability to influence consumption and ideas in equal part – this exhibition is timely and prescient. In their own words:

“…any resemblance to real persons, dead or alive, is purely coincidental. examines how the phenomena of television—the small screen, the short segmentation, the fast-paced aesthetic, the individual versus communal viewing, the either live or pre-recorded content—remains the primary basis from which we derive the current news and narrative structures that shape our daily lives. The exhibition considers the ways in which television portrays and mediates our understanding and experiences of death, dying, violence, bodily harm, ageing of the body and the colloquial conversations involving these subjects. Within the context of Vtape, the exhibition looks at how moving image artworks address these topics today against how they are addressed in different mediums, and the ways the moving image has historically been deployed.

The video works in …any resemblance… deal with different situations and conversations that hint, lead up, or prepare us for death as the only inevitable outcome. Placed in the entrance of the gallery, Stan Douglas’ Monodramas 1987-1991 (1991) acts as a precursor to the exhibition not only as a nod to a pioneer in the field who gave rise to generations of artists to explore the medium of television through video art or because it is the only piece to actually air on television. The Monodramas, with their ubiquitous tone of malaise— one that permeates the work’s uncanny scenarios and the dynamic of interruption into their counterpart ‘80s and ‘90s advertisement spots — clearly hint at somber things to come.

Liz Knox’s Law & Order (2018) collages every cold opening sequence from the television series Law & Order. The format and pacing of this work plays directly with Stan Douglas’ use of the anti-climax in Monodramas. The TV spots and cold openings both work to create and then draw out feelings of unease and anticipation. Both displace, delay, and deny the climactic resolution to a scene.

In contrast, Lee Henderson’s Palliative Care (1985-1992) (2016) approaches these affective outcomes from a different angle. In this work, Henderson compiles every moment when death is discussed in The Golden Girls. Using a strict technical approach to editing, he cuts the clip the moment another word is uttered or the scene ends. Henderson’s treatment of his source material flattens, lightens and essentially renders the topic of death mundane.

Eve Tagny’s We Weight on the Land (2019) explores death spatially. The only installation work in the exhibition, We Weight on the Land looks at the aftermath of death, the physical and creative acts of mourning, remembering, reconciling and memorializing. Working with natural and synthetic materials, Tagny is interested in the ways the bereavement process is and can be visualised and publicly marked.

…any resemblance to real persons, dead or alive, is purely coincidental. looks at the various mediums, formal structures, and material cues that are used to represent the ways we navigate, feel, and understand the experiences around death.”  (shell curatorial collective)

Please join us for the opening reception on March 20, 2019, 6-8pm and drop in for the public programs that follow with artists’ talks and curators’ tours.

Works in the exhibition

Artists’ talks (to take place in the exhibition)

Liz Knox uses conceptual strategies to examine systems of interpretation with an emphasis on irony. Language is the most major through line in her work, and a common starting point is found text. Knox studied studio art at the University of Guelph and completed her MFA at Emily Carr University of Art and Design, Vancouver, in 2013. Her work has been shown in exhibitions and film festivals across Canada, including at Mercer Union, Toronto; Access Gallery, Vancouver; Paved Arts, Saskatoon; WUFF, Winnipeg; and Justina M. Barnicke Gallery, Toronto.

Eve Tagny lives in Montreal in between her travels. She holds a BFA in Film Production from Concordia University and a certificate in Journalism from the University of Montreal. Navigating between writing, photography, video and plant-based installations, she explores themes pertaining to body politics and the evolving definitions of hybrid identities. Most recently, her practice has focused on restoring traumatic disruptions through nature.

Lee Henderson was born and raised on the Canadian prairies, and remains convinced that there’s no better place to contemplate nothingness. When the landscape is just a single horizontal slash between blue and yellow, absence becomes a constant comfort; when the wind is cold enough to make you need other people on a mortal level, absence becomes a terror realized. (Isn’t it curious how place shapes us?)

His earliest recollection is of falling through a garage roof when he was two years old, and he can still distinctly recall the pink fibreglass that “… I had thought was solid but which failed to support my weight.”. However, on returning to that garage decades later, he found that the insulation was and had always been yellow, and covered in black tar-paper anyway. (Isn’t it curious how memory betrays us?)