Walter Phillips Gallery’s exhibition THE CAVE by Los Angeles artist Young Joon Kwak is a visual cacophony of delicious imagery. It ushers the viewer through waves of sexy, oozing objects and a colour field of mermaid tears, French lilac and purple dragon, mint and chartreuse. The colours seep from corners while a glittering moon casts her shadow down upon the viewer from inside a “glamping” tent. 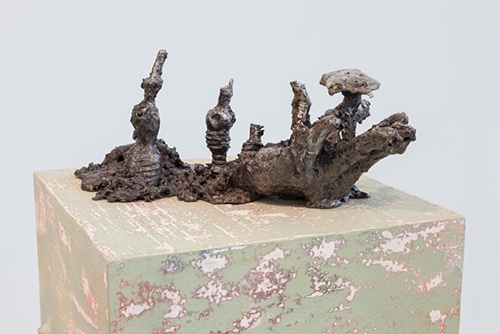 Orifices in walls reveal tiny snails. Orange vagina-shaped lamps glimmer and silver shapes emerge from the ceiling and plinths cast from within a sex toy. One of the central metaphors of the exhibition is the snail, featured in works titled Snail Leg, Aggregate Snail Hangers, Aggregate Snail Vaginis, and VIEW “INNER”. Placing this seemingly insignificant creature at the forefront of this hot and messy exhibition is subversive in its inflections and meanings. The snail is a protected species in the cave and basin area of Banff National Park (the gallery is part of the Banff Centre for Arts and Creativity) but is also a symbol of balanced androgyny. The snail holds both sexual organs and thus is able to reproduce singularly. It unambiguously represents the masculine and feminine, slipping along surfaces and into tiny beautiful crevices across the exhibition space. Like the snail, THE CAVEslides through the viewer’s imagination, instilling a stance of perfect harmony for a non-patriarchal position within the gallery space.

Tourist culture is another central motif and the exhibition explores this phenomenon while poking fun at it. In Maternal River of No Return Kwak and collaborator Kim Ye perform a medley of activities in character as a mommy and baby girl visiting Banff for a family vacation. There is a sado-masochistic element to the three-channel video that features the two exploring the site in what could be seen as both a dreamy performance and an uncomfortable and even disturbing narrative of a family vacation gone wrong. As a whole, the exhibition unwraps stereotypes surrounding queer identity and explores the tourist mystique through a playful and slightly weird lens.