Facing the front door of the tiny DIY gallery soon.tw, Vincent Larouche’s exhibition Bouches de Cendres Actives opens with what looks like an art crime. In Hyenes a hunter takes aim across the missing middle panel of a triptych at a grisaille portrait of a child. Inside the gallery proper, Larouche makes more mischief with a spread of cartoon wall paintings and canvases. His works breach the boundary between art history and visual culture, and point to more serious trespasses in Montreal’s quickly gentrifying Mile Ex. 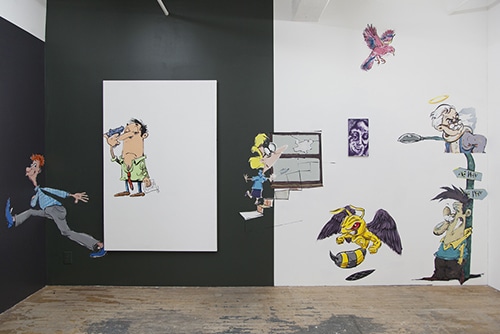 A bespectacled blond girl hurries up a set of stairs toward a broken window as a masked bandit with an oversized credit card darts off in the direction of a real window. Too disconnected to present as a mural, the works are like cave paintings in a revved-up comic world. A network of gazes between three canvases hung among the cartoons moves us into darker and more historical territory. A naturalistic portrait of the Virgin Mary (the missing panel from Hyenes) hangs near a long-faced, middle-aged man with an illegible note in one hand and a pistol pointed at his head in the other. His reasons apparently don’t matter. Both stare across the room to an “undead” blue-faced man dangling from a noose in the centre of a slapstick bathroom scene titled Bestiare 2. The emotional tone of the exhibition is hard to pin down, but another of Larouche’s cartoons provides a cue. At floor-level a google-eyed man with pockets turned inside-out and a cavity where his frontal lobe ought to be, throws his hands up in despair and sheds a single tear. Other characters convey hysteria or antipathy or vacancy and numbness. In a telling contrast, the estranged Madonna and child harken back to the pathos and drama of the Renaissance, while the cartoons with their twisted grins and crossed, blood-shot and troubled eyes allude to non-cathartic millennial feelings.

Larouche’s taste in visual culture is eclectic. He reads everything from Marvel and DC comics to the more “vulgar” works of French beatnik cartoonist Max Cabanes. Echoes of Spirou and Tintin come across in the show’s naïve moments as well, alongside unambiguous nods to South Park and anime. The artist’s images don’t cohere in a narrative, but as the exhibition title suggests their “activity” fills the room with a single, frenzied voice. The characters are taken from various online sources, reworked, coloured, cut down or blown up and arranged with ample breathing room as image-events or exclamations in the space. If the action painters of the mid-twentieth century turned to clip art and cartooning, this is what their work might have looked like. Larouche’s chops as a painter are evident here, as is his awareness of the history of his discipline. But an irreverent rewrite of that discipline seems to be at stake too, in the equalizing or “non-hierarchical” treatment of cartoons and religious motifs – unattributed pictures that he simply “found on the internet.” A paranoid angle on this wellspring for source material is given in the exhibition’s publicity image (also “found on the internet”) of a laughing face tattooed or drawn on the back of a young punk’s shaved head. 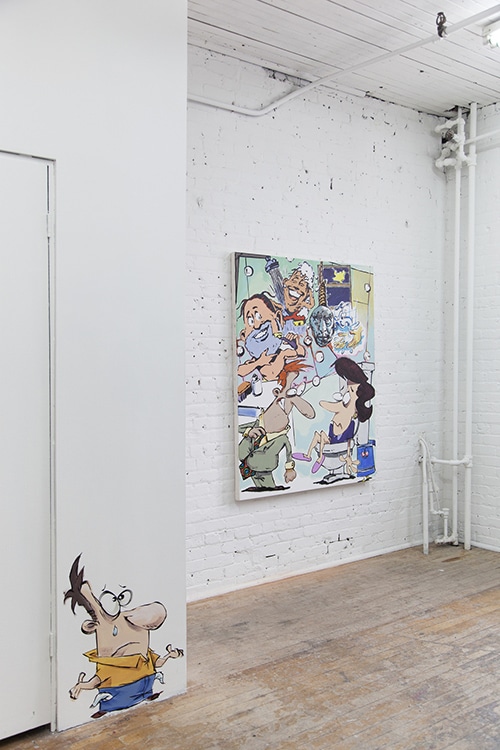 Given the recent sale of soon.tw’s home at the historic #305 Bellechasse, this exhibition reflects a wariness if not paranoia about the changing relationship in Montreal between artists, developers, and creative industries. In its bid to become a leading creative city, Montreal has attracted a growing number of tech companies. Around soon.tw in Mile Ex, a new University of Montreal AI complex, the game developer Behavior Interactive, and Microsoft Research offices are raising the city’s cultural capital and with it prices for nearby artists’ studios. In response, a group called #nosateliers has organized to secure affordable studios for working artists in the city. With the sympathy of the Mayor’s office and its policy to oblige new owners to save spaces for artists, the group remains hopeful. But a lot depends on language. As soon.tw’s director Jérôme Nadeau notes, while the new owners of #305 Bellechasse have agreed to make artists’ spaces available, the difference between a creative firm’s offices and a painter’s studio might well be papered over to raise rents. In this context, and against the slick lines of the gallery’s freshly painted walls, Larouche’s zany characters start to look like creative-office decor – avatars of overworked and underpaid artists in what he calls a “new corporate imaginary.”