this will never finish at Support, London

“Do you exist for my comfort?” This was the question asked by artist Juliane Foronda in the inaugural group show this will never finish at London’s project space Support. Her text was printed on folded paper and fit snugly around a tiny wooden ledge. Copies could be removed by pinching them away from the ledge. This practical yet somehow uncooperative design – the paper didn’t immediately give way – was a subtle but effective, even if accidental, trick to hold Foronda’s question in place a little longer. 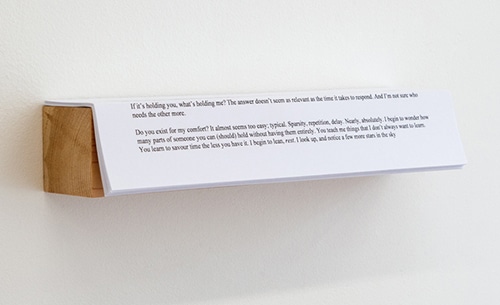 Juliane Foronda, The first thing I look for in a party is a chair, 2017, paper, wood

Co-organized by Liza Eurich, Graham Macaulay, Tegan Moore, and Ruth Skinner, Support occupies the same location as Carl Louie – a previous exhibition project that moved to a residential house last year. The new gallery’s programming is meant to be similarly informal, inclusive, and occasional. Its website includes a litany of definitions for its namesake: carry, reinforce, suggest the truth of, to keep going, and, in droll dictionary clarity, a thing bearing the weight of another thing. This loose mandate, Eurich and Skinner have explained, oscillates between ideas of display, formal structure, and holistic ideas of support and community. For their first show the exhibiting artists both lightly and obliquely responded to the idea of support.

Kristine Mifsud’s varied materials, laid out like studio surplus, avoid preciousness when surface, substance, and orientation appear not just as weathered objects of former use, but as the result of a visual code emerging in dialogue with the surrounding space. Emily Geen’s photographs imagine a simultaneity of temporal space suggestive of the cropped, peripheral reflections of windows, rear-view mirrors, and the collage-like slats of billboards. Lauryn Youden’s SSS: a place to retreat, when I am sick (of you), with its tightly demarcated zones of salt, candles, and blankets, hints at how personal conceptions of rejuvenating space can also be uncomfortable sites of static ritual.

In a reading at the opening by Faith Patrick based on a non-hierarchal collection of poems and photographs, words were addressed directly to the audience as Patrick performed from memory. The poems described a kind of continual divergence in co-existence, with images slipping in from an angle that was hard to grasp, yet impossible to avoid. I think of Foronda’s question from another angle: who exists for whose comfort, benefit, indeed support, and where do we go when it’s gone, dead, over? Foronda’s last line is innocuous, then obvious: I begin to lean, rest. I look up, and notice a few more stars in the sky.

this will never finish was on view from January 28 to February 25.
Support: http://supportsupport.ca/
The gallery is partially accessible.