Taylor Doyle stands at a lectern at Forest City Gallery before a line of performers in strict formation. In a large video projection on the wall behind them, Doyle and pro-wrestler Cydoni Trusste (aka Rebel Kinney) are locked in a fierce grip. In close-up detail, the two women struggle to force one another off balance. Tight cuts focus on grasping arms and fingers, faces of effort, boots shifting. Then the women shift into an exhausted pose in the attitude of a collapsed embrace, like human furniture precariously propped up by each other’s weight. 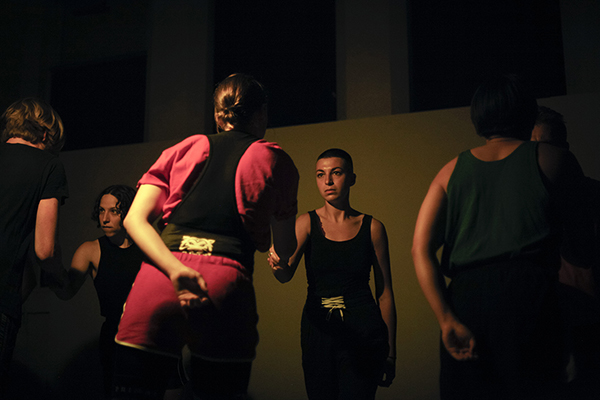 At the podium, Doyle reads, shouting. She asks the performers, asks us, if she performs her politics. She replies, “OF COURSE I DO!”, and joins the formation, which moves rapidly into distinct zones of drill-choreography: an intense face-off, YES NO YES NO call-and-response, comically violent hand-shaking, shouts punctuated with leaping stomps, and a circle of sparring in which performers advance upon a central opponent whose deflections ripple outward like a proverbial ring of fire. The ten-minute performance allows each performer’s unique physical and verbal countenance to give nuance and physical embodiment to Doyle’s text.

The titles of the performance (The Readiness Potential) and the video (Intentional Binding) refer to a theory in neuroscience of being ready or primed pre-consciously to initiate muscle movement prior to movement itself, which challenges the idea of human agency. Doyle relates this idea of a lack of free will in the initiation of physical action (a kind of internalized, learned choreography) to broader conflict via “rivaling bodies” or “debating figures” who “push, pull, grab, and manipulate,” but also need “rest, space, breath,” relying on friction to create action. Without creating an overt performative allegory of any specific past or present conflict, Doyle shifts focus to the space between physical force and the question of agency in face-to-face, body-to-body contact through the combative body as spectacle, such as in entertainment wrestling. What happens to learned choreography when physical intentionality becomes mixed up with the embrace of another? Doyle’s performance points to how the performers’ reactions to each other, and to the reactions of the audience, trouble the idea that our learned behavior, actions, and beliefs towards others are fixed, but instead exist within (and rely upon) continual, often physical, collaboration with each other. 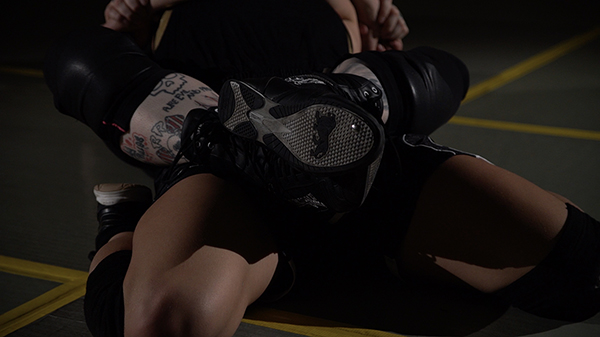 In an accompanying text by Cristina Planas, physical friction is related to “ergonomy,” where kinesthetic (“rhomboid major”), musical (“nerves harmonise”), and queer(ing) language are interchangeable. Points of physical contact become past (“secret rituals known only to the actors”) and present social performance, and skin becomes oversaturated “with an excess of signs.” Abstract yet specific, the text highlights how Doyle’s interest in the grey zones of social and political performance resonates most strongly in the in-between of these words and in the physical presence of bodies in displays of conflict. In the improvised spaces of her collaborations, the idea of self-determination is forced into a state of compromise, where every gesture and point of contact, even in moments of spontaneity and vulnerability, is simultaneously tied up in the perceived narratives of performance “for theatrical effect only.”