Words matter. It might seem too pedestrian a thought to bring up, but it is worthwhile to reconsider how the words we use affect the environment we find ourselves in. Words create access and can just as easily enforce barriers. It shouldn’t have been much of a headline when in 2015 the then Supreme Court Chief Justice Beverley McLachlin asserted that Canada attempted “cultural genocide” against Aboriginal people. However, it must have felt like the unspeakable was voiced publicly with stark clarity. Jaws were dropped and debates abounded, but this only pointed to what most already knew or many citizens were in denial of. The old narrative that focuses on the supposed benevolence of Canada has been sustained by the words used to deflect, undermine, and justify the treatment and denial of rights to Indigenous peoples. 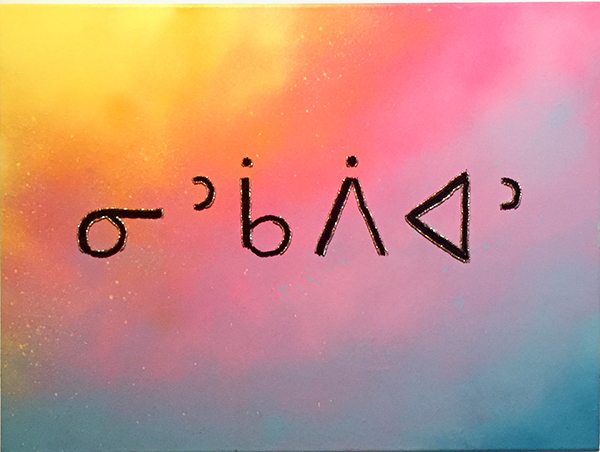 This brings me to the recent four-person group show shooger-koht-ed] / ZiizibaakwadAgoke / Ésíwinikátéki curated and organized by Janell Henry at Urban Sharman Contemporary Aboriginal Art Gallery. The exhibition is composed from a place of mental/emotional exhaustion regarding the necessity to emphasize how sanitizing language continues to dress up the rhetoric surrounding Indigenous treaty rights. Included are works by Bret Parenteau, Jessica Canard, Catherine Forest, and Scott Benesiinaabandan; together (and in their own ways) they address this unending battle with the Constitution and how it continues to feed the colonization of their bodies.

You might come away from the exhibition with only a loose thread linking the various pieces, but it asks you to hold up and stay with. The artists’ offerings – whether it’s Benesiinaabandan’s simulated fantastical worlds, Parenteau’s abstract sound and images, Canard’s intricate beadwork paintings, or Forest’s ornate ceramic installation – aren’t bogged down by the pessimism you might expect from the shackles of oppression. They are instead determined, navigating a weighing of unresolved pasts, holding onto what they have in front of them while awaiting what’s up on the horizon ahead. It’s deeply introspective and vulnerable, even as it is underpinned with political impulses.

The upstream fight to make it out can seem eternal and at times stagnant. Section 35 of the Constitution Act, 1982, which merely “recognizes” Indigenous rights was only taken into effect after protests in the eighties against assimilationist policies. The Constitution is still very vague on what these rights for Indigenous people entail, so during court cases we get judges who take up the position of defining these exact rights. The sidelining of the rights for Indigenous peoples is a hurdle Henry pushes up against through this loose but intimate assembly of artists. With this exhibition, she positions herself by joining in on a conversation that needs to be amplified.

[shooger-koht-ed] / ZiizibaakwadAgoke / Ésíwinikátéki was on display from June 7 to July 20.
Urban Shaman Contemporary Aboriginal Art Gallery: https://urbanshaman.org/
The gallery is not accessible.