Over My Black Body at Galerie de l’UQAM, Montreal

The difficult task of looking long and hard at the historical rootedness of oppression while maintaining a sense of control over the conversation is accomplished to affective ends in the group exhibition Over My Black Body. Guest curated by Eunice Bélidor and Anaïs Castor, and presented at Galerie de l’UQAM, this generous collection of works by local, national, and international artists creates fertile conditions for shared reflexivity on the stakes and positions we hold as actors in complex systems of oppression and liberation. 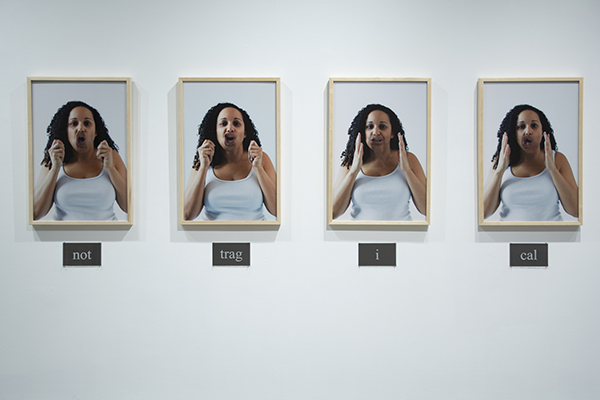 Erika DeFreitas, I am not tragically coloured (after Zora Neale Hurston) (detail)

Each artist takes aim at their specific target from their particular vantage point. In Lye and 1994, painter Manuel Mathieu uses abstraction to shift away from a voyeuristic reading of two often fetishized instances of the Black body. Only titles and brief wall texts point to the paintings’ referents: collective domestic labour and genocide. In the photo series The Refutation of ‘Good’ Hair, Nakeya Brown exposes and subverts the euphemism “good hair.” Flaunting four distinct hairstyles, Brown accentuates their attendant skill and familial connections, undermining the privilege afforded or withheld on the basis of hair in white supremacist orders. The Black female body in Erika DeFreitas’s photographic series I am not tragically coloured (after Zora Neale Hurston) addresses complex links between language, race, and embodiment. The artist situates herself in a lineage of Black intellectual women and rejects sexualized readings of the most erotic part of the female body – the mouth – as she pushes her lips up against plexiglass mid-articulation of Hurston’s titular quote. In Monday, July 17, 2012 (Danzig Street, Scarborough), and so buried in it that we only see them when pulled out in abstraction, DeFrietas embroiders the coverings over bodies killed in public spaces. Dedicating material time and labour is a mourning ritual, while the final images offer stark commentary on the violence perpetuated by circulating dehumanized images of bodies.

A series of plaster cast works by Stanley Février also flag the representational impulse. In les enfants de l’homme, deformed ceramic faces are suspended in a room covered with corrugated metallic sheeting, implicating the viewers’ bodies’ as they move through. For Cette Chair Février casts his body in stark white plaster – a color he associates with death. He is on his knees, eyes closed, hands in the air  in the gesture of “hands up, don’t shoot.” It took two visits and several hours before I could stand in front of the sculpture for more than a few seconds.

Following Février’s closed-eyed gaze leads you to a darkened space with two screens. Loops of Buju Banton’s Boom Bye Bye followed by Nature Boy by Nat King Cole repeat at half speed. They are the soundtracks to Chainmail and Chainmail 2 by UK artist Amartey Golding. In Chainmail, Solomon, the artist’s brother and the first Black British male dancer to join The Royal Ballet, is lead through a series of dark corridors until he enters a ring of people drinking and smoking. Wearing subsequently heavier and heavier chainmail suits, he dances to the homophobic lyrics of Boom Bye Bye until his collapse. Born of a mourning impulse similar to DeFreitas’s embroideries, Golding’s layered references propose critical readings on the violences of white supremacy and those held within Black communities, as well as the capacity for protection and self-determination.

Mid-way through the exhibitions run, on June 1, as part of OFTA Festival d’arts vivants, Marilou Craft and Chloé Savoie-Bernard performed À la racine, a two-hour performance over the duration of which the artists silently organized a pile of domestic materials. As they sorted through the heap of clothing, books, beauty supplies, and memorabilia, a collection of deeply personal items emerged and were placed on a table where viewers could peruse them until they were filtered into boxes organized under a mantle-shrine, which would be the final remaining work, complete with childhood photos, cherished toys, figurines, flowers, and battery-operated Ikea candles.

Like all the works in Over My Black Body, À la racine grounds in the personal as a poignant amplifier of the political, exemplifying the level of vulnerability and risk-taking that makes this exhibition simultaneously powerful and urgent.

Over My Black Body continues until June 22.
Galerie de l’UQAM: https://galerie.uqam.ca/
The gallery is accessible.

Sarah Nesbitt is an independent writer and curator based in Tio’tia:ke (Montréal). Her writing has been published in esse + arts and opinions, PaperWait, The Eastern Door, Public Parking, and Border Crossings. She is co-curator of window winnipeg, a 24-hour project space in Winnipeg for 2019.