I remember Nicole Kelly Westman as a dedicated Photography major during our undergraduate studies at Emily Carr University. Now, using the apparatus within cinema and theatre as well as photography, she returns to Vancouver with her both calming and quirky exhibition cuculoris, a time machine for shadows at Western Front. The five separate artworks, consisting of sculpture and video, merge into what feels like one installation that reflects on the memory of place.

A sheer curtain dyed pale tones softens the entrance wall and doorway. Inside, coloured light gels create a warm ambiance and abstract shapes are mimicked between the artworks. Upon entering, there is a gesture of trust: a water cooler filled with fresh water that Westman collected and hauled in glass jugs from a not-so-secret spring at Harvie Heights in Alberta. Cups are available for use, each covered by a paper sleeve with a drawing of a mountain and a written text saying, “waning brash of bruises exchanged in a currency of care.” We are asked to believe in the artist’s process and by extension to accept the truth of art in and of itself. 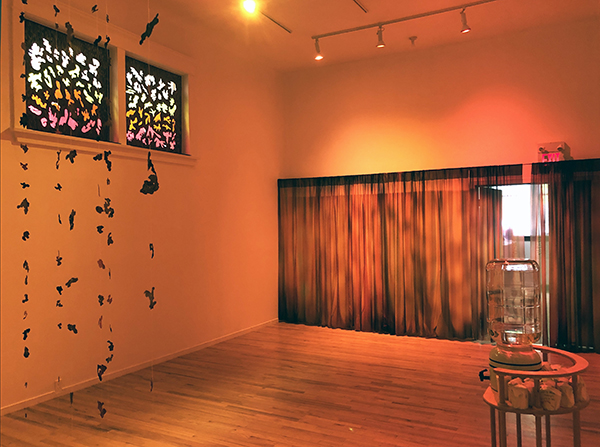 The titular artwork of the exhibition is situated in two upper windows of the gallery that haven’t been exposed like this since they were covered in 1985. Now, wooden window enclosures with cut-out squiggly shapes accented by coloured lighting gels allow the light from outside to creep in. The work simulates a cuculoris – a tool used to create softer shadows with industry lights. The squiggly shapes are traced from the shadows of trees, reminding us of what lived right here prior to the building’s construction in 1922. These abstract shapes also shine light into what, decades ago, was a dining area for the lodge before Western Front moved in.

In the middle of the gallery is outside her bedroom window, which consists of multiple fragments of ponderosa pine hanging on pieces of string. These unique chunks of wood were nicknamed “puzzle bark” in the neighbourhood where they were collected on the property of a friend’s childhood family cabin home. Shaped like the cut-outs in cuculoris, they cast shadows onto white fabric that is similar to a studio backdrop.

Behind this fabric partition is for nights bathed in sodium vapour, a Super 8 film Westman made for the exhibition using gels and sodium vapour lights. Historically used in street lighting, sodium vapour is being systematically replaced by LEDs. This will give a cooler cast to the evening backdrops of the future, changing the way we see and recall the moments we capture, and affecting the memories which play like films in our heads. Westman wanted to produce a film during her short return to Vancouver, a place she will soon leave again. A desire to capture this specific moment before it passes defines the impossible yet anticipated task of photography. The soundtrack, created in collaboration with Kurtis Denne, includes electric guitars and motorcycles. Think Twin Peaks or, as curator Pablo de Ocampo puts it, “ominous and foreboding.” While the visuals trade on nostalgia, the sound is unsentimental.

Westman’s shadow machine reminds us of the transcendence and virtue of art making, and of how time allows for memories and meaning to be cast onto the land and into ourselves. After viewing the exhibition, I spoke to Westman about how it felt to make work in the city that was so formative to her. “You know when you’re falling in love with something or someone?” she says. “This felt like one of those types of exhibitions.”