Toronto-based artist Nahed Mansour’s exhibition at Articule takes up the figure of the belly dancer in mostly American popular culture. The integrity of the show’s concept is provocatively broken down in a kaleidoscopic range of works. From found footage to album covers and sheet music, to carbon transfer drawings and archival photographs, Mansour presents us with less of a history of belly dance than a study of variously Orientalized, racialized, and commodified bodies that perform it.

The historical and nameless Little Egypt who introduced American audiences to the dance at the 1893 Chicago World’s Fair is more elusive in this show than past subjects of Mansour’s works such as Michael Jackson and Bill “Bojangles” Robinson. She disappears behind an ever-growing archive of fetishistic representations of “the Orient” – indexes for Euro-American anxieties about a spectral Middle East from the 1800s to our post-9/11 era. Mansour’s Little Egypt is caught between the frame of 19th Century scientific racism, in which she appears as an aberration and a target for moral police, and a swirl of ambivalent feelings for Middle Eastern culture in the wake of the “War on Terror.” 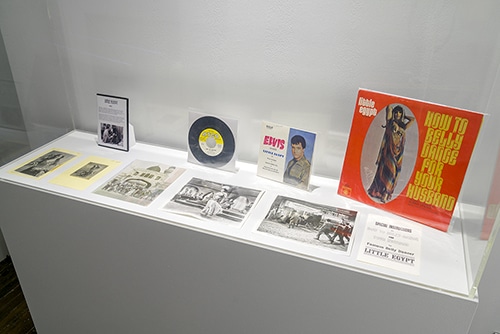 A found medical illustration of a stomach opens the show, freezing a sign of the dance under a deadening scientific gaze. A black and white photo of abdominal muscles zooms us out to the dance’s source of strength, which is promptly undermined by a neighbouring photo of The Board of Lady Managers from The Chicago World’s Fair – the group that campaigned to ban Little Egypt’s performance in 1893. Another wall text refocuses our attention on the dancer’s offending part with backhanded praise: “the abdominal muscles are the only portions of anatomy or mind that show any cultivation,” but they are displayed “to serve the basest uses.” With these elements Mansour shows how, like the so-called “Hottentot Venus” of 19th Century European freak shows, Little Egypt’s body is constructed in discourses on decency and sex hygiene as a moral and physical threat.

Mansour’s muse is informed by the artist’s research on a surge in the dance’s U.S. popularity since the nineties. Scholar Sunaina Maira argues in her paper Belly-Dancing: Arab-Face, Orientalist Feminism, and US Empire that after the Gulf Wars and especially after 9/11 the dance mobilizes mixed “imperial feelings” among white, middle-class, liberal feminists for a figure of the Arab woman who is, at once, envied for her sensuality and corporeal power, and pitied for her suffering within an imagined Arab-Islamic patriarchal culture. For Maira, the recent tolerance and even mania for belly dance passes over uncomfortable realities of racial-profiling, deportation, surveillance, and detention within the US, and the ongoing history of US military interventions in the Middle East.

Several works in the exhibition take up the prehistory of these ambivalent feelings in 20th Century popular culture. A pulpy version of the Chicago Fair story from the 1951 film Little Egypt directed by Frederick de Cordova plays on a TV monitor. With this, Mansour plunges us into a technicolour fantasy of the belly dance in which the Fair’s originally Syrian and Algerian dancers are nowhere to be found. Instead, actress Rhonda Fleming offers an appropriately white-washed iteration of the belly dancer, a little like Rudolph Valentino’s vaguely ethnic portrayals of Bedouins and “Lounge Lizards” in the 1920s, or more recently Ridley Scott’s controversial all-white casting for Exodus: Gods and Kings. We are drawn further into the pop cultural imaginary of the dance in a vitrine containing records of the song “Little Egypt” by Elvis and The Coasters, and a Sonny Lester album cover offering instruction on “How to belly dance for your husband.” 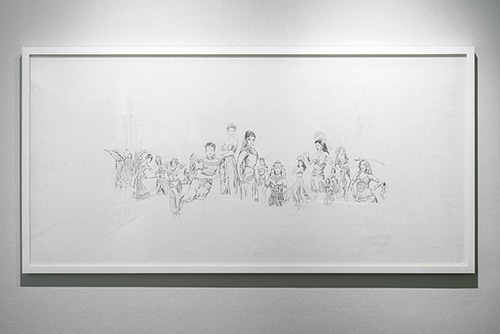 At the back of the gallery two large drawings of dancers titled The Streets of Cairo – Middle East and The Streets of Cairo – North America hang on adjacent walls. The titles indicate a difference between the groups of dancers, but they are hard to tell apart. The women pictured are stitched together into panoramas of giants, genies, and goddesses of Orientalism near and far. These pictures, along with a case of ghostly drawings of dancers on carbon paper titled …displayed to serve the basest of uses and a set of carbon transfer drawings on American one dollar bills titled Importing Little Egypt and arranged in a pyramid cast the belly dancer as currency – a unit of value in American popular culture and an endlessly repeated form or a received idea.

Whether Mansour affords the figure any agency in the show is uncertain. We get the sense that she is both drawn to the image of the dancer and wary of its appropriation. Look closely at the drawings in Importing Little Egypt and a message comes across in the alignment of the dancers’ eyes with the bills’ Eye of Providence – the reviled, coveted, or otherwise looked-upon figure of the belly dancer in Mansour’s hands finally, and vengefully, returns the gaze.