Maya Gauvin works with sculpture, ceramics, installation, and textiles. Often drawing from visual and material histories of archaeology, votive objects and reliquaries, archetypal systems, and craft technologies, her works consider ways of knowing which may be gleaned through relationships to material and memory. Her installations serve as repositories, offering potential tools for divination and truth telling, while centering on ideas of personal and material transformation, geology, myths of world creation, and symbolic systems. Her recent work is being shown at Access Gallery as part of the group exhibition EAT YOUR TAIL, which continues until February 8. 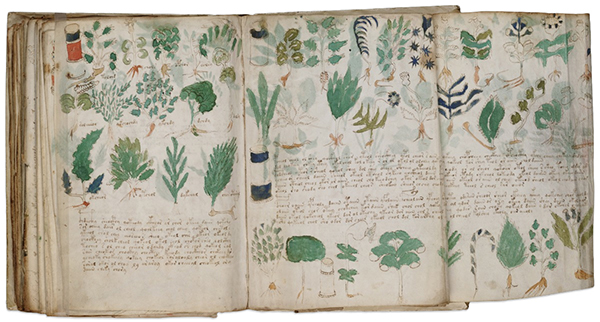 This is a strange and fascinating illustrated manuscript from Europe that some believe dates back to the 13th Century and has some connection to the English philosopher and scientist Roger Bacon. It contains hundreds of pages of bizarre illustrations on vellum depicting unknown/fantastical botanical specimens, naked women bathing in pools of green liquid, celestial formations, mandala-type cosmological diagrams, and what look like elaborate systems of pipes, tubes, and plumbing, some of which are attached to the women’s arms/bodies. It also contains dozens of pages of dense text in an unknown language, the logic of which has not been deciphered by any cryptologist, linguist, or scholar of any kind. Some speculate that it is a document on plant medicine and women’s health; others are not convinced it references anything factual in the natural world at all. In any case, I find it exciting that the mystery around this document persists, especially in a world where there is little left that remains unknowable. 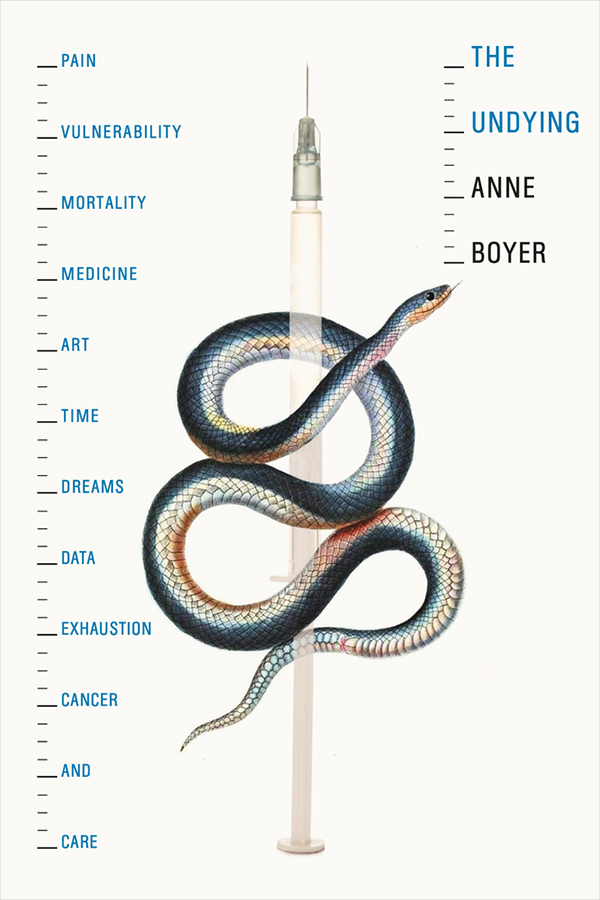 This is a devastating book. I recommend it to everyone, but specifically to anyone who has experienced, firsthand, loving someone who has or has had breast cancer. This book could be meaningful and healing to you, and it may also be hard for you to read. I have been reading it slowly, thoughtfully, and deliberately. It takes as its departure the journey of the author’s own experience with a breast cancer diagnosis, living as a sick single mother, and dating as a sick and sexual being. Then it expands to talk about illness in literature, poetry, navigating the health system in the United States, and being an advocate for oneself within what she describes as the “capitalist patriarchy’s ruinous carcinogenosphere.” So, if that’s a kind of intensity of feeling you want to experience, read this very important book.

I’ve been enjoying this new album from Salami Rose Joe Louis, an artist, musician, and planetary scientist from California. The sounds on his album are warm and warbling – jazzy keyboards and synths burbling and gurgling along while lyrics allude to another world beyond our world where octagonal rooms contain paintings which are portals to other dimensions and alien corporations try to understand why human earthlings love the sun so much and try to harness its power. It is goofy and groovy and heartfelt while engaging with ideas of capitalism, greed, and ecocide. But it leaves you feeling fed, not bled.

I grew up on a small island in the Salish Sea and in winter, when the wind would blow from the southeast, that meant grey, rainy, and very high winds. Sometimes it meant no one was leaving the island on the small passenger-only ferry until the water was calm again. When I was young I used to lie awake at night listening to the trees bending and creaking and moaning and rubbing up against each other. It sounded like people or creatures crying out, and it used to scare me. As I got older though, my dad and I made it a tradition to go to the beach on stormy days like this, to stand in the spray and power of the wind. I find it intoxicating to be out in the wind, feeling like you could so easily be swallowed up and disappear completely. 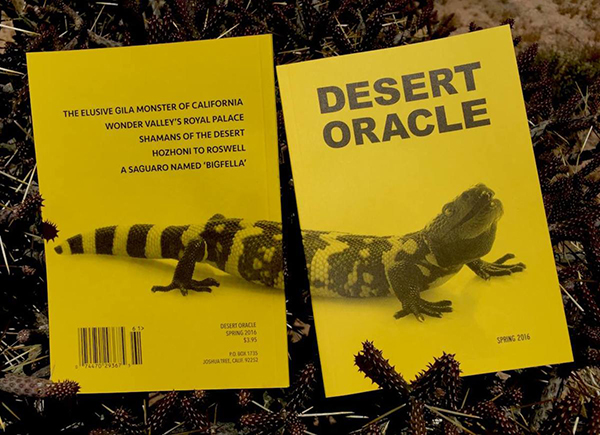 Desert Oracle Radio is a podcast by Ken Lane about life in the Mojave Desert, broadcast from Joshua Tree, California. Area 51, UFOs, mysterious tracks in the sand, freaks, mystics, get rich quick schemers, drop-outs, water issues, conservation, new age happenings, unexplained events, the California witchcraft scene, bizarre reclusive creatures: these are some of the things discussed on this podcast. Lane has a voice like no other, perhaps one of the best voices suited to radio that I have ever heard. It is a strange combination of dramatic and resigned. Sometimes he just tells ghost stories by the fire and you get to hear the crackling dryness of the desert through the airwaves, inflected with his deep, slow, nasal, sultry voice.