Traversing both Oakville Galleries locations, Material Tells, curated by independent curator and critic Daisy Desrosiers, presents a group exhibition featuring eleven internationally recognized artists whose material manipulations become expressions on migrant, political, and spiritual experiences. Throughout this wide-ranging exhibition the human figure is only physically visible in one work, which underscores the curatorial vision to present a survey of structural, domestic and institutional elements that manifest a haunted and embodied sense of personal absence and loss. This spectral casualty becomes a meditation on what narratives remain visible through time and space. What becomes evident through Material Tells is what is not there: a loss of control, access, and agency. 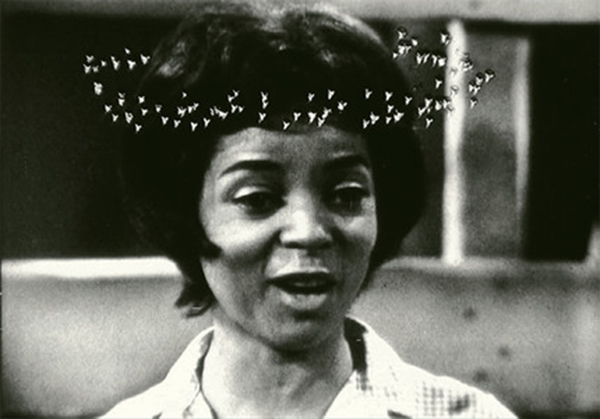 The gallery at Centennial Square is split into two main sections. Loosely cordoned off to one side is artist/filmmaker Ja’Tovia Gary’s projected film An Ecstatic Experience. Created in 2015 the film begins with an ethereal harp solo played by Alice Coltrane. Using footage of actress Ruby Dee’s 1965 television performance of the true narrative of a formerly enslaved woman who tells of her mother’s ecstatic claim of freedom while being lashed by her master, Gary etches into the celluloid using patterned dashes, dots, and hand drawn lines to frame and emphasize Dee’s performance. The six-minute film also intercuts footage from the 1950s of Southern US Black churchgoers, and recent video footage of Black Lives Matter protests and riots from Baltimore and Ferguson. Gary paints the footage with colour swaths that weave together moments of Black resistance from the age of slavery to the present day. Dee’s electric performance echoes through the gallery as she repeats the mantra: “I’m free, I’m free, I’m free, I’m free, I’m free.” This work functions as an anchor in the space, providing a glorious question so deeply pertinent to our current climate and to this exhibition: When we are bound by systems of oppression, how do we choose freedom and claim personal agency? 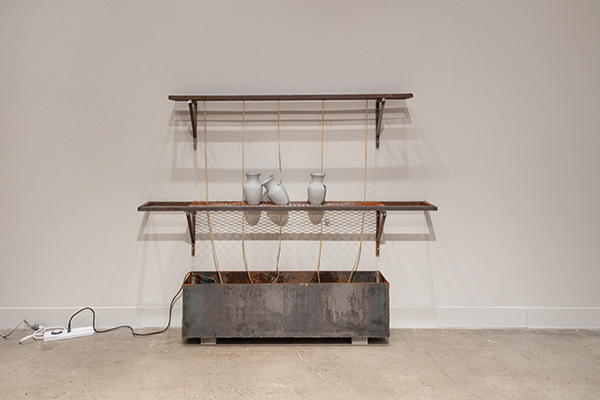 Canadian Sudanese, New York-based artist Azza El Siddique’s slip cast vessels and utilitarian design invites a quiet contemplation on temporal form and decay. Let Me Hear You Sweat uses a drip irrigation system to dissolve simple clay vases as they break apart and seep into the steel basin below, which rusts as it accumulates the muddy remnants. The sound of water dripping and the slow decomposition of the urns triggers an embodied reflection. Big spiritual life questions of loss and transformation are settled in this process of deterioration. I am left asking: Is it necessary or even possible to fight or stop the inevitability of time?

Where El Siddique considers the movement of time and the return of natural elements unto themselves, Shannon Bool’s structures commemorate deeply personal items cared for by women imprisoned in Germany. Developed from relationships Bool made with inmates at a women’s prison, three foreboding industrial steel structures replicate prison cells in the centre of the gallery. The women’s personal items – lipstick, a pen, a comb, and cigarettes – have been cast in bronze and chained to the cell bars. These tiny monuments accent the prisoners’ confinement, highlighting the limited ability they have to claim individual agency through the use of small, everyday objects.

Leaving Centennial Square and walking through Gairloch Gardens, it’s hard not to be struck by the neighbourhood’s wealth. This area could easily be considered the Beverly Hills of Oakville with its faux-Versailles estates surrounding the garden grounds that create a surprising backdrop to the work on view in this Tudor-style home gifted to the city and converted to a moderate-size gallery. On view in three smaller rooms are works by Kevin Beasley, Beverly Buchanan, Jesse Chun, Felix Gonzalez-Torres, Iris Häussler, and Kapwani Kiwanga. Though conceptually consistent with the Centennial Centre exhibition, the smaller scale of the works at this location punctuates an intimacy and attention to more corporeal means.

The first work you are met with is Untitled (Portrait of Dad) from 1991 by Cuban-born artist Gonzalez-Torres who died in 1996. As a representation of his father, 175 pounds of wrapped candies are piled on the floor in the central gallery with the offer of each guest to take one piece only. Visible through the windows behind Untitled (Portrait of Dad), a bush of hydrangea blooms drunk on their bounty lay on top of each other, alive and at the precipice of dying. Seeing this bounty repeated in the mountain of white candies, I am moved by this profusion as it announces its inability to ever come close to the true weight of a life. 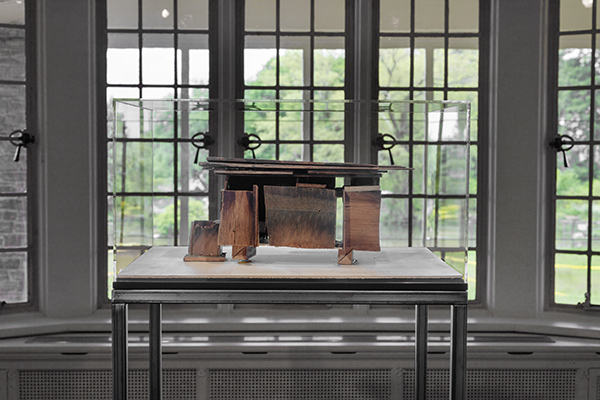 I keep returning to a sculpture in the sitting room north of the centre space created by prolific African-American artist Beverly Buchanan, who sadly died in 2015 before her major retrospective at the Brooklyn Museum in 2017. Narrow Doors is a scrappy miniature wooden shack replicating make-shift architecture of the Southern US. Presented under glass, this piece feels muted, its texture and tactility vibrating out, pushing against the clear walls. The small scale and lack of human presence appears ghostly and ominous in this cozy, welcoming space. Buchanan’s celebration of Black resourceful resilience in the face of Jim Crow era white supremacy stays with me as my mind wanders back to the weary strains of Ruby Dee’s voice from Ja’Tovia Gary’s film. No terrestrial form can stop time from continuing, just as no force can stop our claims to freedom. Desrosiers’ well considered, complex, and expansive exhibition uses materiality to take the place of our broken, weighted, aging bodies and underline the dichotomy of our fragility and the power we possess all at once.

Liz Ikiriko is an independent curator, photo editor, and photographer. She recently received her MFA in Criticism and Curatorial Practice at OCAD University, and present her thesis exhibition The Break, The Wake, The Hold, The Breath with Circuit Gallery at Prefix ICA.