If Madeline Mackay’s solo exhibition Not Yet Earth at Martha Street Studio reminds us of anything, it is the sheer materiality of this often elusive matter we call flesh. If you aren’t a surgeon or haven’t studied human anatomy, the very thing that encompasses our bones and gives our bodies shape might seem trivial. For Mackay, the thingness of flesh is the center from which she directs her interests. It is as much a form of self-examination as it is something that branches off to include any being with a body. Her exhibition is less about “body art” (i.e., identity as gender, sexuality, or ethnicity; although, I wouldn’t rule it out completely) and more about the body as material. It takes a different direction than say, what we’ve seen performance artists do with their bodies. Mackay zooms right inside and underneath the skin to makes sense of its arbitrary physicality. 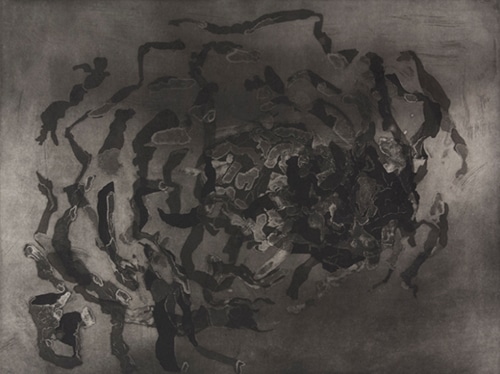 On entering the gallery, you are met with a series of thirty-plus etchings in a grid pattern. The prints are studies of butcher meat cast-offs the artist assembled for her drawings. Her interpretations don’t immediately read as the insides of a body. The etching process obscures them. They aren’t bloody or the gooey slop you might imagine. What we see instead are various grays amalgamated from her black ink registrations. The depictions of meat could easily read as wave-like scribbles or abstract mark-making. It’s as if she’s been staring at and thinking about these bits of flesh so incessantly that they blur into otherness.

Mackay offers additional renderings of found meat by way of CMYK screen-printing or mixed-media drawing. Each work contains its own abstract logic. Any reference to specific bits and pieces of meat is lost. They exist as entities in and of themselves. Her source material is only revealed in a video where a hand (presumably the artist’s) parses through knots of gathered flesh beside what looks like a muddy puddle. This action is contemplative and feels intimate. It’s not as grotesque as one might think, nor does it have an anthropological or medical distance to the way the flesh is handled. Instead, it is held with a delicacy as though feeling out the textures for any lingering memory these animal parts might still hold. Hers is an introspective and quiet look at what was once a part of a larger mobile being, now diminished into mere detritus waiting to decompose into the ground.

MacKay takes what is very much a part of us and makes it feel unfamiliar by accentuating the banality of its tactility. She is less interested in capturing the exact likeness of flesh and more focused on its strangeness as an autonomous object when it is no longer part of a living, breathing body. The work here illustrates the many ways the flesh can be transformed and disfigured as well as our own bodies’ fragility and resilience.

Madeline Mackay: Not Yet Earth continues until February 8.
Martha Street Studio: http://www.printmakers.mb.ca/
The gallery is accessible.