In her seminal 2014 monograph The Notion of Family, American artist LaToya Ruby Frazier presented a complex chronicle of the ways socioeconomic ills and governmental negligence have led to the decline of her once-thriving steel mill hometown of Braddock, Pennsylvania. At the center of this nuanced social documentary is a personal one. She details how her own family, like many in the community, are tangled up in this decay and continued to live in the toxic rubble, not because they couldn’t get out, but because the same system that cornered them there made sure they couldn’t leave that easily. The black-and-white photos in the book weave through three generations of the artist’s family history in relation to Braddock, and they highlight how the history of place invariably writes itself on the body. 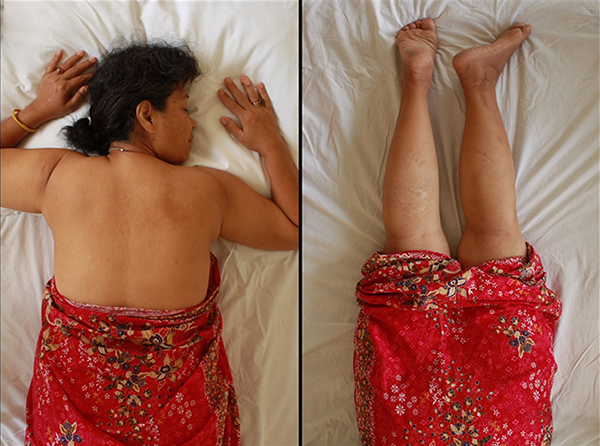 This same transgenerational legacy of place makes its way into artist Lucille Kim’s personal narratives, but she approaches from a different part of the world. In her exhibition Between Temporal and Permanent Histories of Pain at aceartinc., she enlists the participation of her mom and pops in an absorbing two-channel video installation meditating on the possibility of alleviating inherited pain that continually returns. Her parents are just two of the many Cambodians who lived under the violence of communist regimes during the 1970s and early 1980s. For their generation and those who followed, the past keeps coming up, and even if they no longer live in the same place or time, it follows them. It’s right there on their bodies.

Through her video projection – which is a series of individually photographed frames captured in small increments as opposed to a smooth continuous playback – Kim performs coining, a pain relief technique she’s been applying to her parents since she was a kid. She not only archives her attempts to ease her parents’ aches, but the delicacy and grace by which she reperforms this feels like a hushed lullaby in reverse.

With the two-opposing projections of her mother and father, we are placed in the middle of an intimate space. Despite the lingering weight that underscores the position they are in, every effort Kim makes to soothe them is a testament to her own resiliency to push back and see her aging parents bolster – even if it is only for the night. The work reflects a sense of personal obligation and reciprocity between generations. The artist grapples with the past alongside her parents, but she and they are never beholden to it.

Like Frazier’s book of documentary photography, narration here is handled unflinchingly, but never at the expense of convenient, neatly packaged resolutions. They each carry family histories that transcend mere domesticity. Kim’s story of self-possession never dwells or succumbs to the historical trauma it fearlessly references. It is also a story of care and relates a sense of responsibility towards ancestry – to narrate and carry the stories of her past forward.

Lucille Kim: Between Temporal and Permanent Histories of Pain continues until October 11.
aceartinc.: https://www.aceart.org/
The gallery is not accessible.