To be honest, there are few things I’d rather do than watch a trashy TV crime drama. So, I knew in advance that I’d enjoy Liz Knox’s exhibition Law and Order at PAVED Arts, since it is inspired by the long-running television series. Law and Order is the title of the exhibition as well as the three-channel video installation that chops up and rearranges the “cold opens” from the program from morning to night. A flickering barrage of the micro-dramas that begin each episode – explosions, gunshots, arguments, and corpses – lines one wall. 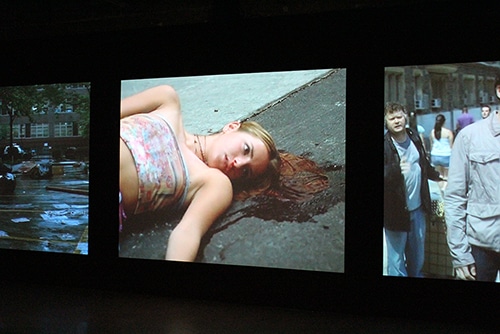 The three decades of crime vignettes compiled here are peppered with delightful moments: current A-list celebrities in bit parts, amusingly spot-on recreations of other TV shows, and minor characters so efficiently sketched as to be instantly despicable. Law and Order (the work) manages to comment on the lurid nature of the show’s “ripped from the headlines” content without destroying the base pleasures of the pop culture mainstay.

Knox’s single channel video All Persons Fictitious is more closely allied with the artist’s established text-based practice that mines user-generated posts as absurdist pop culture commentary. Similarly, it illustrates the ironic friction between (the TV show) Law & Order’s mirroring of real people and events, and the ever-shifting wording of the disclaimer that opens each episode: “The following story is fictional and does not depict any actual person or event.” Knox has superimposed three seasons of this text over each other, the blurred and dimmed lettering approximating a trace of the show’s dance with fact and fiction. Just like the program that inspired the exhibition, Knox’s Law and Orderdoesn’t break new ground, but it’s a compelling examination of an unlikely cultural touchstone.