A tinny melody can be heard as you move through Joi T. Arcand’s exhibition she used to want to be a ballerina, on display at College Art Gallery 2 on the University of Saskatchewan campus. It is the chorus from Buffy Sainte-Marie’s song of the same name, which inspired this exhibition. The melody plays from a small music box decorated with colourful iridescent stickers and a ballerina at its centre. 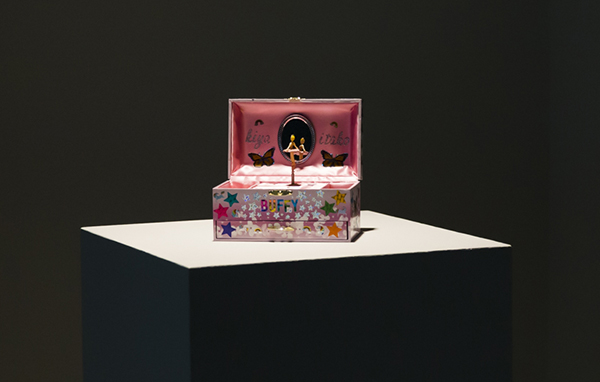 Joi T. Arcand, she used to want to be a ballerina (for Buffy Sainte-Marie), 2019, music box

Two works occupy the large, central exhibition space – neon signs in nēhiyawēwin (Plains Cree) language – ᐁᑳᐏᔭ ᓀᐯᐏᓯ (ēkawiya nēwēpisi – Don’t be shy) and ē-kī-nōhtē-itakot opwātisimowiskwēw (she used to want to be a fancy dancer). The works – the scale of signs found atop buildings but hung here at eye level – suggest a questioning of the difference between public and community. Rather than being displayed for some unidentified “general public,” they are hung here for those present, for us, the blending of their orange and purple lights creating a kind of party atmosphere.

At the far end of the exhibition, partially closed off behind a wall, are the eight zines produced through Joi’s collaborative project, kimiwan, which brought together the works of so many amazing Indigenous artists and writers. In the context of this exhibition they mark a movement from Joi’s role of artist to that of curator and organizer. Though this is Joi’s show, she makes sure to make space for the stories and work of others.

As I was there reading kimiwan zines, I heard two high school age girls debating which neon sign to take their photo in front of. When I looked up, one of the girls had made her choice and, as her friend filmed, she twirled on the dance floor created by the glow of the sign.

Joi T. Arcand: she used to want to be a ballerina continues until August 17.
College Art Gallery 2: http://www.art.usask.ca/
The gallery is accessible.

Michael Peterson runs Saskatoon’s Void Gallery, a non-profit screen print and risograph studio, and is in his third year as Curator of the city’s annual Nuit Blanche festival. Through Void he works with recent immigrants and Indigenous youth to develop zines sharing personal and community stories that too often go unheard. You can follow his work on Instagram @voidgallery.