Mount Saint Vincent University Art Gallery has a large parquet floor and high ceilings that make the single room an open and breathable space. Jane Kidd’s tapestries hang on the walls and rest, upright and flat, on shelves. Her exhibition Curious, organized by the Kelowna Art Gallery and curated by Liz Wylie, is an assemblage of four bodies of work from the last decade: Phenomena, Wonderland, Curiosities, and Land Sentence. These hand-woven images explore the relationship between humans and nature, and the endless questions concerning our impact on the earth, the environment, and its organisms. 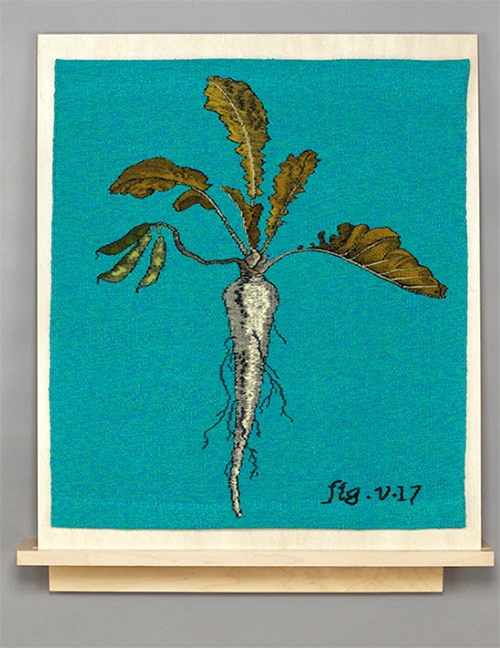 The brightly coloured tapestries feature images such as shells, leaves, bones, and wings surrounded by more ambiguous forms. Organic shapes juxtaposed with geometric constructions, such as grids, complete the compositions of both the Land Sentence and Phenomena works. Both these series look at the effects of human activities on the earth and address issues such as climate change, pollution, and deforestation. Curiosities creates pairings of both human-made objects and elements from the natural world. Kidd combines a human rib cage and a shell on a bright red background, or a piece of machinery and a thistle-like flower. Curiosity is an eagerness to know or learn something, and this series reflects just that: the artist creates images of wonder and magic. This is also beautifully depicted in her Wonderland works where she explores bioengineering and human tampering with the natural world.

By combining the human-made with earth beings – as well as through using computer-generated images of the landscape that surrounds us – Kidd questions the precariousness of the world we live in. Within these interconnected fibres and threads, this exhibition magnifies the web of interconnections between our lives as humans and all the other beings in this world, while also depicting the horrors of the human condition.

Carrie Allison is an Indigenous mixed-race visual artist born and raised in unceded and unsurrendered Coast Salish Territory (Vancouver, BC). Situated in K’jipuktuk since 2010, Allison’s practice responds to her maternal Cree and Metis ancestry, thinking through intergenerational cultural loss and acts of resilience, resistance, and activism, while also thinking through notions of allyship, kinship, and visiting.