Writing on the paintings of Cy Twombly, Roland Barthes speaks of an “essence of writing” that is “neither form nor usage but simply gesture – the gesture that produces it by allowing it to happen: a garble, almost a smudge, a negligence.” Such gestures simultaneously say: I can only be this way and no other way; and: I am not where you are, I am elsewhere. A similar notion is played out in the new work of Jamie Macaulay on display at Forest City Gallery, wherein the gestural is both inward-facing and inevitably tied to a singular trail of perceptions. In contrast to his earlier work, these new paintings and drawings are looser, less inscrutable, and a working-through of much more personal coordinates. 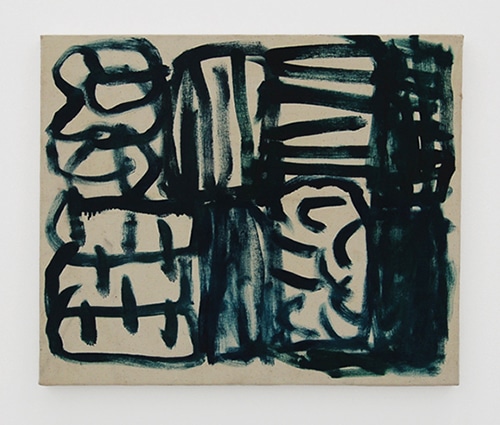 Referencing a W.G. Sebald anecdote of Flaubert, In the Hem of Emma Bovary’s Winter Gown refers to a moment in which the entirety of the Sahara is glimpsed in a grain of sand. For Macaulay, the notion of the initial gesture as indicative of the whole of experience begins in the line, the mark, the stain, and the layering that support the loosest of images. Through the use of repeated motifs, these initial gestures become emblematic of moments that are themselves shifting and changing.

In a lineup of small drawings, some of these emblems are easier to identify, appearing as the repeated forms of flies, snakes, clouds, and disembodied feet. Other drawings are messier and read less like stacked, cartoon currency. Their stories are oriented as strings of resemblances with the occasional textual anchor: book-bottle-hotdog-potato-sack, sardine-smashed-in-Hell, crawling-torso-impaled-by-iron-web.

Groupings of small paintings read as keys to each others’ tightly-cropped logistics, where serpentine legs and floating feet are most often the central actors. These books, bottles, buildings, feet, flies, and other objects are often left to their own pictogram-like devices, occasionally upstaged by a single, scrawled word like “inferno” or “insomnia,” or caught in a snake’s grip. The repeated narrative tone is of struggle, aimlessness, or futility.

The results are much different when Macaulay combines the behavior of the scribbled word with the cartoony doodle, allowing the resulting motif to mutate, flipping back and forth between text and image. In two paintings which sit between more animated groupings, the resemblance-strings become a wall of interconnected lines and marks. In the smaller of the two, what might read as two squat stacks of lumpen flesh quickly wriggle away from any further associations. In the larger, the wall of shapes is further organized by pared-down texture, designated by the simple jottings, cuts, and striations of graphic lines. I read the paintings as if they had the urgency of text. Yet the effect is more of an obscure nervous system with each section given a specific, mysterious role within the bare skeleton of a unique organism.

These paintings find their own way to refer towards, refusing to rely on the aura of symbols or the dregs of abstract noise. They behave as pictures do, as text does, but not completely; they ask me to think beyond the meaning of what they’re saying, and instead to make meaning with and alongside them. As Barthes says of Twombly’s scribbles, the result is an “indetermined and inexhaustible sum of motives.” The gesture that acts “without perhaps really wanting to produce anything at all.”