Reflecting on the signage of Las Vegas in 1965, essayist Tom Wolfe trades in the “helpless language of art history” for more appropriate terms: “Boomerang Modern; Flash Gordon Ming-Alert Spiral; Mint Casino Elliptical.” James Gardner’s Syzygy tests the limits of disciplinary language as well. Among the twenty-three works currently on display at McClure Gallery are sculptures and paintings composed by the bendy rules of collage and assemblage. In some, beach debris and organic matter burst out of voids recalling the readymade tradition, but found objects are hard to isolate from their rough-hewn latex, board, spray-foam and polystyrene armatures. For Gardner’s creations, we need new words. 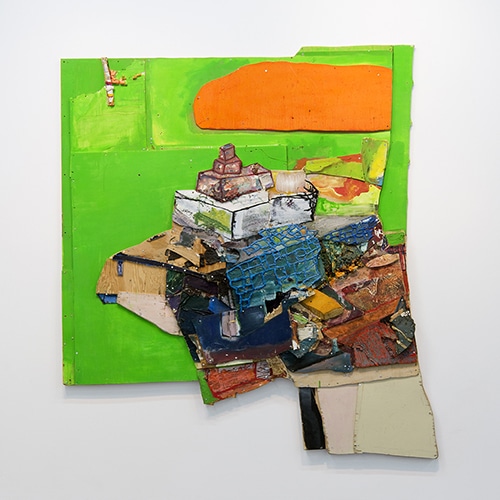 His imagination is kindred with Wolfe’s, but the artist’s sources come from well beyond US commercial strips and way before the 1960s. Many of the show’s materials are scavenged from the Toronto Portlands where Gardner and the members of the collective VSVSVS occupied a warehouse from 2010 until 2017. And the images are taken from his archival research on pagan symbols in Medieval and Renaissance iconography. By Gardner’s lights, beach-combing for debris and flipping-through illuminated manuscripts – scavenger’s work and monk’s work – are intimately related meaning-making activities.

Packed with insulation and studio detritus, a stout, concrete tube sculpture titled Core Sample #1mimics the anthropogenic rocks of Toronto’s land-filled lakeshore. Call it “Leslie Spit Cylindrical.” The curved lattice sculptures in the FRNKS Lung series are made from wax, latex, and a supply of caramel-coloured spray-foam that the artist weathered on a city rooftop and moulded around balloons. The spaces left by the balloons are like cavities in an oversized toffee treat. Call it “Toronto Rooftop Honeycomb.” For both works, industrial and cultural artifacts are formed into ancient and post-industrial shapes, charged with symbolism, and forgotten to time. While the language of art history is stretched to account for these works, concepts drawn from earth-science or biology seem apt. By name and shape, Core Sample #1 recalls an environmental testing process used to measure atmospheric CO2 in ice from Greenland and Antarctica, and the FRNKS Lung pieces look self-generated or autotrophic – gnarly algae or bacteria sprung-up from the froth of Lake Ontario.

More distant shores are evoked in the paintings. A close look through their bright coloured layers reveals traces of an ongoing study of astrological and alchemical imagery. In the works, historical materials are freed from European archives where Gardner found them languishing in dusty books, and revived into Instagram-friendly primary colour schemes. After years in the Portlands it’s not surprising that he’s drawn especially to maritime imagery. An image of a boy-sailor amid wobbly geometric forms in a seascape titled First Decan of Sagittarius is taken from the medieval astrological “Sloane Manuscript”, and a pair of embracing bathers from a 17th century illuminated manuscript are surrounded by red liquid in Old Lovers. This last melancholic picture for Gardner combines an obscure historical image with a still-vivid personal memory of lost love. 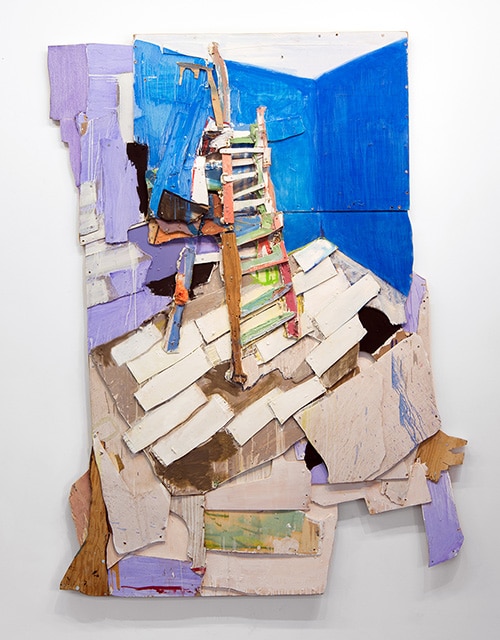 The merging of esoteric and personal signs is apparent as well in the exhibition’s most striking works (PAW and Latest Ladder) – hulking assemblages that, like the sculptures, are best described in terms for natural processes. In them, images of a Sumerian or Mayan-type pyramid and a ladder are cobbled together in sedimentary layers. And an accretion of meaning compliments the works’ structure – the ladder is at once a studio tool and a symbol of spiritual ascension, and the block-pyramids oscillate between a necropolis and a stack of construction materials. Both works picture Gardner’s studio environment and the force of the imagination that transforms it from a physical into a symbolic space.

How does all this patient gathering, arranging, concealing and revealing of materials communicate beyond the walls of Gardner’s studio? If the work escapes the language of recent art history, where does it escape to? Into the planet’s geological past or simulations of it on Toronto beaches? Into image-banks of fin de siècle art historians like Aby Warburg and Alois Riegl whose methods Gardner reanimates with marble dust, pigment, and power tools? Despite its archaic and academic references, the work in Syzygy seems very much of our time too. If Warburg and Riegl found evidence of a universal will-to-form (Kunstwollen) in the recurrence of serpent and vegetal iconography across cultural traditions and art historical periods, Gardner asks where that same will might lead nowadays, in our era of unlimited access to a glut of unclassifiable images. Following the artist’s example, we might answer: to the library, the studio, and finally the beach.