Hell in a Cell at Forth, Winnipeg

Patrick Klassen doesn’t see his rodent infested basement studio as a problem; rather, it’s an opportunity. Even as they create families and invite friends over, their company in his cramped workspace is a welcome scenario for making his provisional painting assemblages. In Hell in a Cell, his recent show with Marijana Mandusic and Michael Mogatas at the multi-purpose alternative space Forth, working within constraints becomes a poetic act of capturing the ephemerality of chance, accidents, and improvisation. 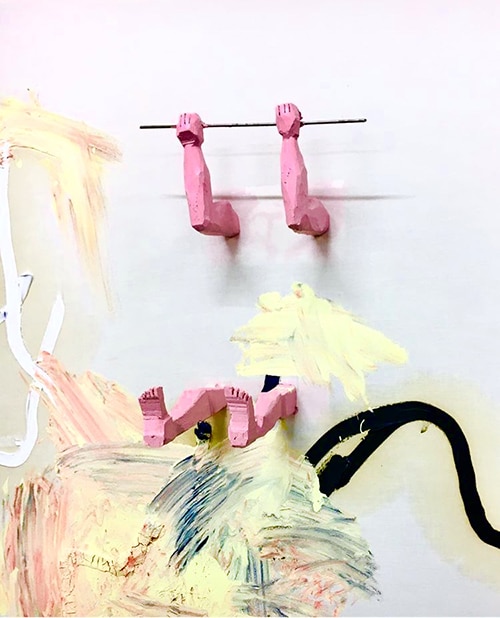 The three artists bricolage their idiosyncratic ways through painting and, along the way, embrace errors, imperfections, and mice droppings. Klassen has always greeted the tradition of painting with open arms only to spin it through unrecognizable paths and aberrant turns. He continues this penchant for artistic openness by offering exuberant and playful approaches to abstraction that at times toggle back into suggestions of wobbly figuration. He covers found leftover scraps in paint, animating and creating new forms that either support the stretched canvas surfaces or jut out from them.

Mandusic takes this baton and runs with freeform enthusiasm and whim. But instead of sculpture-painting combos, she deliberately goes for sloppy smears of color that barely hold together on the surface newsprint paper. Balancing pedestrian mark-making with wonky gestural riffs, Klassen and Mandusic joined forces on multiple pieces in the show. The result is equal parts bizarre and rewarding. If jam sessions are propositions for the unexpected, then here the two artists’ offbeat mish-mashing make for something legible – however anarchic they appear. They both circumnavigate the canvas with skittish doodles and amalgamated scribbles with a mocking bent towards pictorial traditions.

Mogatas comes off as the quiet one in comparison to the other two. His paintings counter their childish painterly fits. In fact, he doesn’t use paint at all. He doesn’t seem interested in drips and splatter. Instead, he offers stretched surfaces, allowing the grain of the canvas or whatever fabric he chooses to speak for its own color and texture. Occasionally, he includes a print of an unassuming faint image as a complement to the otherwise empty picture plane. Without a hint of overt gesture or blunder, Mogatas’ images also rely on a generosity of intuition and serendipity through the process of making. This allows for a flawed delicacy unachievable otherwise. Parallel with works by the likes of Wade Guyton, intention and the provisional meld to a harmonically nourishing return for his inventions here.

In total, Hell in a Cell leverages the aesthetics of error as a strategy of display. Whether by way of errant marks, kooky objects, or atmospheric fields, the artists here rack up the rewards of appearing asymmetrical.

Hell in a Cell was on display from September 22 to 28.
Forth: http://www.forth.ca/
The venue is not accessible.