In all the ways poems are unconcerned with telling a story and have an imperceptible relationship with cause and effect, a show like Gabi Dao’s A knife to wither your petal fingers at Blinkers reverberates with unexpected possibilities. More than just another immersive installation, it disorients with cacophony-laden affect before you become absorbed. Criss-crossing computer-generated beats and samples, frazzled moving images, an assortment of vestigial objects, and the artist’s own voice, the exhibition produces a labyrinthine terrain. 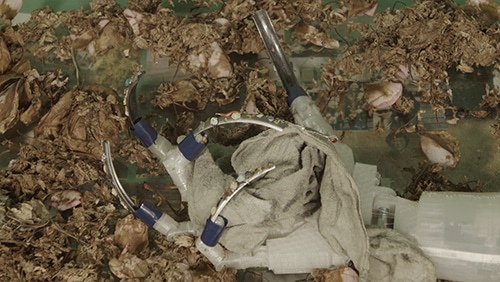 Dao has touched on a few of the thematic elements swimming through this exhibition before. Here she magnifies them and leaves them out to breathe. Her previous experiments with recording sound effects were a way to think through the fictions behind our understandings of representations. In Open Sesame from 2015, she took Hollywood’s sweet tooth for other cultures to task and managed to simultaneously unpack and converge James Turrell’s Ganzfelds, misappropriation in relation to Angelia Jolie’s Tomb Raider, and the archetypal authoritative voice associated with narrating and broadcasting ostensibly objective information through mediums like nature documentaries.

With her current exhibition she successfully bridges a multi-directional line of sight into a conglomerate and frees it to play out. Dao’s continued interest in cinema sees her keying into its negation of perception specifically as it relates to conflict á la Paul Virilio’s War and Cinema. Referencing and juxtaposing family photos with Hollywood movies on the Vietnam War like Apocalypse Now (which was made the same year Dao’s family moved from Vietnam), she susses out the division between personal memory and cultural history. The Vietnam War is also a point of decentering for families like hers who are now part of the diaspora. The dissolution of the war during this time became a contributing factor to the insurgence of North American suburbia when those returning from war and wanting to start anew were dispersed outside the metropolitan centers. Aptly, Dao positions the suburbs as a site of dislocation by filming the video in her parent’s backyard in the Vancouver suburbs – an area that also became a common site for movie productions relocated from LA.

Adding to the already complex intertextuality of the video, the cold digital debris and techno-informed beat spasms that zigzag across the screen furthers the thematic discontinuity and breath-halting collisions we see, hear, and feel throughout the gallery. Dao’s crisp announcer-y voice cuts through the video and grabs your attention as she recites carefully considered diction like: “Cinema is a cool gel that glosses over my eyes.” Her voice is every bit as authoritative as those seemingly objective voice-overs in the style of David Attenborough except Dao finds a way to make it personal and intimate. 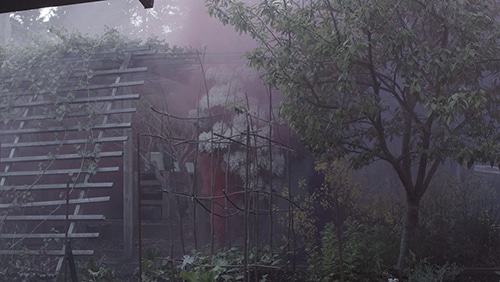 The heap of garden soil that contours the gallery floor and her trellis-like sculpture furthers the randomized headspace of the exhibition. It reaches for an articulation of the paradoxes distinct to the ontological experiences of a diasporic identity. Dao’s work in the past has been an additive process of collaging. It’s no different here, though it’s more inward in a piled-on abstracted way and both structurally intricate and manifold in its self-referentiality.

Gabi Dao: A knife to wither your petal fingers continues until August 3.
Blinkers: http://www.blinkers.website/
The gallery is partially accessible.