“Picasso’s new home on the Prairies” proclaims a roadside billboard. I am aghast, ready to join the legions of complainers and naysayers. It seems natural to be sceptical about Remai Modern, the ambitious new international museum of modern art in, of all places, Saskatoon (though the precedent set by Bilbao might make this setting prescient). But then Picasso’s new home on the Prairies gave me a gift: a book containing UK artist Ryan Gander’s meticulous copies in felt pen and corrector fluid of each of the museum’s 406 Picasso linocuts. Remai Modern has been making much of their gift – the largest collection of Picasso linocuts in the world – furnished by the museum’s namesake: Ellen Remai. She also contributed the lion’s share of funds for the construction of its riverside glass and steel building into which the masses flooded a few days ago for opening weekend. 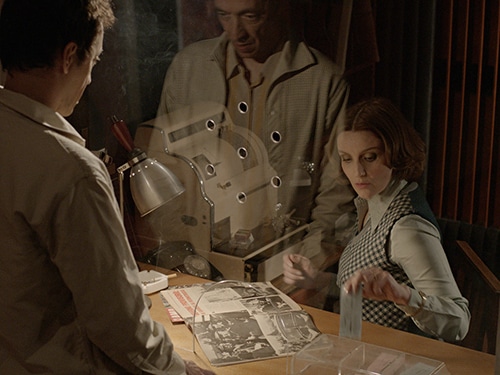 It would take my entire word count to list the names of all of the artists included in the inaugural exhibition. Grandiose, expansive, and largely excellent, Field Guide plants a flag for the museum’s envisioned place in the world. Recent acquisitions such as Stan Douglas’ non-linear, multichannel video installation The Secret Agent, Anton Vidokle‘s captivating video exploring the history of Russian cosmism The Communist Revolution was Caused by the Sun, and Gander’s remarkable conveyor belt-powered sculpture peep show rub shoulders with modernist works inherited from the collection of the Mendel Art Gallery (the gallery out of which Remai grew). Vibrating with hopeful shades of pink and violet, Eli Bornstein’s Quadraplane Structurist Relief, No. 15 is a hopeful talisman for this new museum. Now in his nineties, he bridges past and present, having participated in the first exhibition at the former Mendel Art Gallery as well as this one.

One final note: while Saskatoon might yet become a destination for art, I doubt the same could ever be said for fashion; therefore, I recommend you eschew style in favour of comfort when choosing footwear for your trip to Remai Modern. Those concrete floors are hard on the feet.