Step into Emma Mayer’s A glass half empty, a shoe half filled at Blinkers and you immediately get the sense that something is intriguingly off. Some unspoken riddle is lurking in the air and underneath the surfaces. First, there’s the magnified shoe that announces itself the minute you enter the gallery. But even more than that, as you make your way past the individual works, you might ask, “What am I missing?” Maybe in the middle of that thought you find yourself grinning and wonder, “Why am I amused?” You might then circle back to the previous question: “What is missing and what she not showing us?” 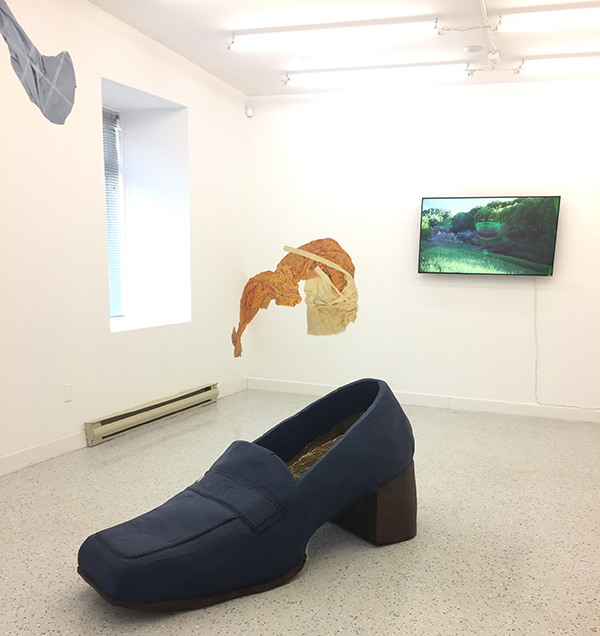 Emma Mayer, A glass half empty, a shoe half filled, 2019, installation view

As you walk through Mayer’s looking glass, you do so without any specified backstory. You may be a bit suspicious, maybe feel a tinge queasy. You wait for something to happen, but you are left hanging. This isn’t a spoiler, because there isn’t a plot to follow. Instead the artist invites us into a patchwork of images, loopy props, and ominous sounds. She murmurs to us to suspend all disbelief and give in to a woozy dream-state. The Lynchian wailing that wafts through the upstairs and basement levels of the gallery drape the show like a thick fog.

Matched with silent videos, this sound piece re-directs their images towards surrealist turns. An army of champagne glasses filled with pink liquid sit idly on the gallery floor next to the box tube TV monitors plucked from some bygone era. There’s nothing remarkable about the videos on these bulky monitors. They can be read as homemade nature documentaries – if there even is such a genre. Mayer has made one out of her childhood floral backyard.

There’s another video upstairs, but this time, on a flat-screen. It contains a face-painted figure in a pink dress doing who knows what in the middle some bushy park. The figure occasionally gives the camera a deadpan glare and we see a wide shot of the same figure walk up a stairway into the distance, but not before a hand flies in mid-screen to circle the rims of the same champagne glasses we saw downstairs. The hand continues this peculiar ASMR-esque motion in a ritualistic manner. At this point, if you are still asking questions, you are wasting your time. You should probably just let go, submerge yourself, and spiral along. 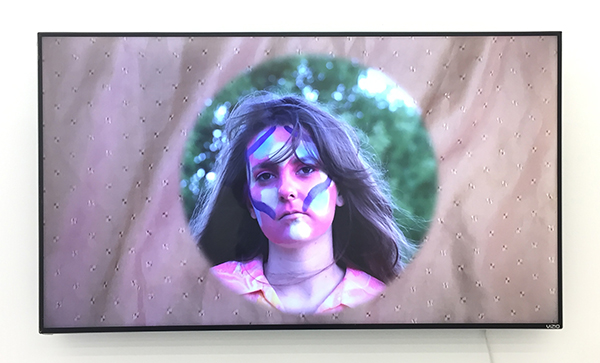 Emma Mayer, A glass half empty, a shoe half filled, 2019, installation detail

As your eyes move across the adjacent walls, you find what looks like fabric or perhaps a gown the figure in the video would likely wear. Instead of the actual thing, it is compressed into the flatness of a one-to-one scale cut-out photograph and pasted to the contours of the walls like wallpaper. There are also the eighties-pastiche keepsake portraits of a woman in children’s face paint like the figure from the video. The portraits are ornamented with kitschy floral arrangements. The face-painted lady is seated. She stares quietly at us and appears affectless. Like the figure in the video, she doesn’t seem to be there to kid around.

We keep hearing about the surreal times we live in and how nostalgia is catching up with us. Even though we live in 2019, the cultural milieu keeps convincing us of the nineties’ rad vibes and how totally awesome the eighties were. It seems like the past doesn’t want to rest. The past keeps reviving itself each time we inch into the future. Mayer conflates different timelines, past encounters, and even those events she wasn’t a part of but somehow live with her.

Disorientation becomes the only logical turn on which she rests. What is sentimental is held with as much dread. It becomes an unobtainable longing. What is familiar becomes something other, something unreachable past the surface. Mayer presents us merely with the sheen of things, but she uses this atmosphere of surfaces to draw out an emotional effect. Everything together beckons for you to put aside rational thought and, like in the Twilight Zone, nothing should be taken at face value.

Emma Mayer: A glass half empty, a shoe half filled  continues until August 25.
Blinkers: http://www.blinkers.website/
The gallery is not accessible.