It’s the presence that stayed with me in Echoes, the Remai Modern’s exhibition of recent acquisitions by Indigenous artists. The presence of Indigenous bodies, which a good friend once reminded me are always political. Because we are still present; we haven’t been erased. 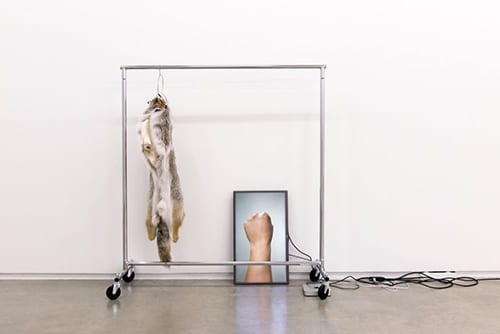 In Duane Linklater’s The place I seek to go, the presence is his hand, shown in a video on a flatscreen leaning sideways on the floor, slowly flexing as if to say it moves, it works, I work; I have undergone but I am still here. In Raymond Boisjoly’s (And) Other Echoes, stills from the film In Exiles are reproduced, but on gray tinted glass so dark that though bodies are present, the one I noticed most was the reflection of my own. Raymond forcing me to situate myself in this space and history.

Standing in front of Rebecca Belmore’s untitled #1 and untitled #2 (come in cielo cosi in terra), I found myself first looking down on two figures standing ankle-deep in water but holding my gaze and then, turning to the opposite wall, looking down with them at their reflections. With titles including a line from the Italian version of the Lord’s Prayer – on earth as in heaven – the works discuss the ambiguity of healing from Residential School abuses at the hands of the Catholic Church while we continue to harm our land through resource extraction. The figures are standing in water dark enough it could be oil.

It was also between the gaze and reflection of Rebecca’s work that I was able to look up at Lori Blondeau, her body draped in red cloth and positioned as sculpture in four large, inkjet prints that comprise Asinîy Iskwew. It was here I spent the most time, trying to understand what it was I needed to learn. It came only after a long period looking over the photos, over the changing stone bases on which Lori stands. The stone is left as stone, refusing western, male traditions of needing to “make art,” of needing to assert our dominance over the land. Asinîy Iskwew references histories that aren’t canonical, that aren’t colonial, and through her presence Lori brings these histories into Remai Modern.

Echoes, and the space it occupies, stands in stark contrast to Jimmie Durham’s much larger At the Center of the World, which basically comprises Remai Modern’s third floor. Whereas Lori’s work represents our land and our histories, too much of the discussion around Durham’s exhibition has felt like it hasn’t been meant for us.

In a recent conversation with a Remai board member, he explained his frustration at the criticisms they receive for not better supporting local artists and that they have the imperative to show national and international art. I listened and smiled, but to be honest I’m tired of being told I need to think of international trajectories. And I guess I’m tired of having things explained to me by white men at the Remai. This is my home, and I want us to care for our land and our people. Echoes does both, and I hope more exhibitions like it – and more exhibitions curated by the considered and talented Sandra Fraser – are given space at our gallery.

Michael Peterson runs Saskatoon’s Void Gallery and the city’s annual Nuit Blanche festival as well as managing programs for AKA Artist-run and the Saskatchewan Craft Council. When he has time he is also a printmaker, currently serving as Artist in Residence at his old high school, Aden Bowman Collegiate. If you would like to see pictures of his friends’ dogs, you can follow him on Instagram @michaelprints