Perhaps it’s the new year with all its accompanying anxiety, but I was actually eager to visit an exhibition about death, hoping that the content would substantiate my macabre mood. Misery loves company, right? Dying is a participatory exhibition presented by Taboo Health (a non-profit collective of curators and health professionals) as part of the 2019 DesignTO Festival that spans Artscape Youngplace’s second floor hallway as well as the third floor gallery Critical Distance Centre for Curators. As the exhibition title and festival context suggests, Dying explores death through design and art, and, overall, treats the subject empathetically by spotlighting families, caregivers, and healthcare workers who often bear the burden of loss. 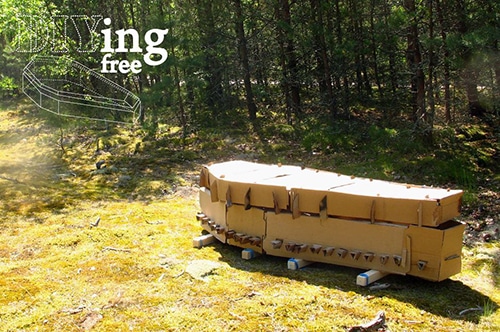 At Critical Distance Justin Tyler Tate stages his DIYing Free, a do-it-yourself cardboard coffin (you can download the template and make one yourself here) that is open source, sustainable, and apparently legal depending on the rules of your cemetary of choice. I timidly entered the gallery and quickly scanned the room for the coffin, but it did not immediately appear. I passed through another door-like opening and found myself in a small viewing room with four black banquet chairs sitting on top of a grayish black carpet, facing an unadorned, cardboard coffin. It was more rustic than I expected (but what did I expect?) and somewhat creepy. I may have shuddered and walked out immediately if it weren’t for the oddly amusing video projected on the far wall. A voice (the artist’s?) both jovial and somber narrates details about the casket. There is also a sign that asks you to take off your shoes before you get inside for a selfie. In his artist statement, Tate posits whether DIYing Free will be viewed as grim or enlightening, curious or distasteful, and I believe he has managed to elicit all four reactions. A free, downloadable cardboard coffin is certainly thought provoking and ingenious, but is the selfie exhortation and its hashtag (#coffinselfies) a frivolous addition or a successful disruption of the funereal process?

Dying continues on the second floor where there are several personal sculptural and photographic pieces reflecting on end-of-life care and the end of life itself. Though sincere, many of these were superficial and failed to live up to their participatory ambitions, but the clear standout is Constellations by Karen Oikonen and Kate Wilkes, an eight by sixteen foot “wall” that asks you to map the death of someone in your life, prompting you to recall how long they suffered, how prepared you were for the loss, who supported you, and who caused you stress, among other pointed reflections. I made my way through Constellation with a friend who lost a close family member some months ago. Using a red ball of yarn we followed the multiple-choice questions and wrapped its threads around each corresponding answer. By the end we could both see that her particular experience of loss was accompanied by an incredible amount of support, but the map also revealed that this was not the case for many others.

Surprisingly, Dying did not validate my dark mood, and I exited the exhibition rather cheerful, pleased to have had an opportunity to contemplate and interact with such solemn topics. As I left the hallway not totally creeped out and not sad, I blurted out “That was fun!” before immediately feeling guilty for saying so, but perhaps it is to the exhibition’s credit that they managed to achieve their goal of making me “comfortable with the uncomfortable.”

Dying continues until January 27 as part of the DesignTO Festival.
DesignTO: https://designto.org/
The gallery is accessible.