Dog-Ear to the Left of the Centrefold at Duplex, Vancouver

Now, in its third year of operation, Duplex is a project space programmed by a handful of artists with studios next to it. The current group exhibition Dog-Ear to the Left of the Centrefold considers the role of the artist as a knowledge producer and brings together four practices that construct unusual, yet valuable, forms of research. The artist-curators describe the exhibition as “examin(ing) how creative practices intend to resist and deviate from a network of hegemonies vis-a-vis works of edible sculpture, video, installation, publication and performance.” 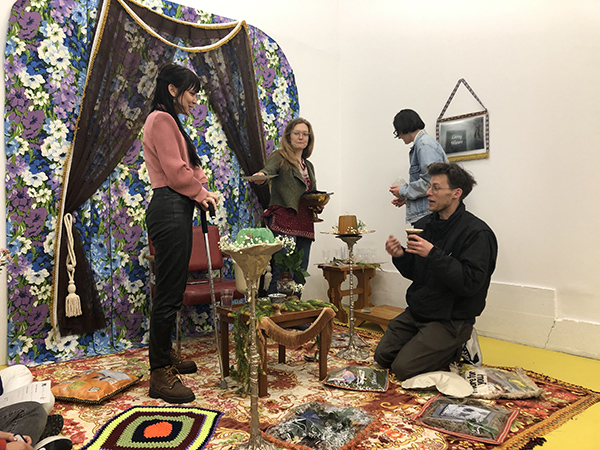 Jacobo Zambrano’s video An Introduction to the Exotic is Never Home documents the bureaucratic and fetishized process of repatriating cultural belongings housed at the Field Museum in Chicago back to an Indigenous group in the Brazilian Amazon. Watching over the exhibition is a site-specific text-based work by artist (and Akimblog correspondent) Luther Konadu titled A CLEARANCE FOR SITTING, RECLINING, HYDRATING, AND EASING INTO ELATION. This text spans two walls near the ceiling and refers back to the room by delineating and allocating a space of non-labour where one can relax. It is part of an ongoing series about utopian spaces titled retirement pavilion. Adding a dose of cynical irony is Erik Sjödin’s contribution that includes the digitally-rendered video work Azolla Fern, a publication titled The Azolla Cooking and Cultivation Project, and popcorn served at the opening that was sprinkled with the plant. His earnest research into the Azolla fern, which grows plentifully in Scandinavia, looks at the plant’s potential as a sustainable food source. It is high in nutrients, which are specifically useful for life in space; however, if it’s eaten in large quantities, it becomes neurotoxic.

The most physically and visually dominant work in the exhibition is Messmates, an altar-like installation filled with intricate colours and patterns by Sharona Franklin. She activated the artwork at the opening by reading a script that referenced her own medical conditions and Pythagorean culinary praxis – a concoction combining Vedic, Greek, and traditional Chinese medicines. At the end of the performance, a poppy-seed milk called Milk of Moderation and two medicinal pork-based jellies were served. The flavors were wormwood absinthe and nettle mint. These ingestibles were offered as a reaction to veganism and mainstream health and wellness indoctrinations, while also containing the nutrients Franklin needs to maintain her health.

At a moment when we are overloaded with information, easily dog-earring more digital information than we know what to do with, this exhibition suggests the importance of more traditional forms of knowledge and ways to exist in the world.

Dog-Ear to the Left of the Centrefold continues until June 7.
Duplex: http://www.duplexduplex.ca/
The gallery is accessible.