As a curator, I’m interested in the representation of disability within art history and its various systems and structures. As part of my work, I have employed a theoretical methodology whereby I forge allegiances between minority and mainstream categories in art history to demonstrate that work by disabled artists can be contextualized within established art genres as a means for placing greater transformational value on their work. But I question if this is merely serving to reinforce the normalization of these pre-existing canonical categories. What is at stake in employing this comparative procedure? What is gained or lost when I build my critical enterprise on this approach?

One potent curatorial example of where my strategy at aligning the work of canonical, ostensible mainstream body art/performance art/live art with disability art met with some criticism is when the disability studies/performance scholar Carrie Sandahl gave a lecture on my Flesh of the World exhibition at the University of Toronto in October 2015.[1] Sandahl said she felt my juxtapositions were problematic and uncomfortable because the politics of disability were emptied and thus lost their power within this new context. She foregrounded her argument by alluding to the specific context from which she herself comes from, as an artistic director of a disability arts festival in Chicago (Bodies of Work) and as a professor of disability studies, art, and culture at the University of Illinois in Chicago. She also offered a definition of “disability art” that was based on the famous “nothing about us without us” slogan that was coined and heavily utilized during the ADA protest and actions in 1990, amongst other pivotal moments during the disability rights movement over the past several decades. 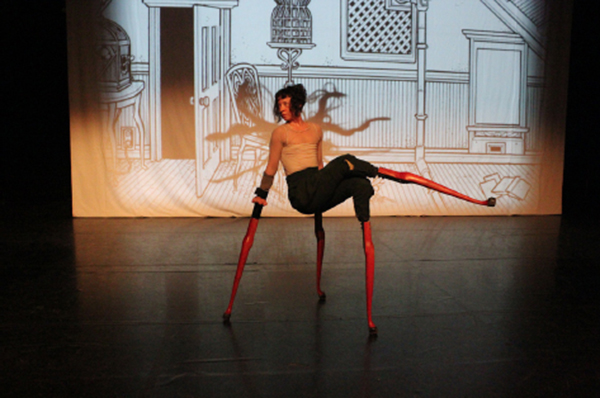 Lisa Bufano and Jason Tschantré, Home is Not Home, 2011, video

Sandahl then gave the specific example of seeing a video work in my exhibition of the deceased amputee dancer Lisa Bufano, who was performing on stage using bright orange prosthetic legs that imitated the look and form of Queen Anne table-legs, and held this up against the exploratory work of the famous Australian artist Stelarc, who uses all manner of creative and experimental prosthesis to challenge the limits and definitions of the body. Sandahl argued that juxtaposing these two works in particular was politically and ideologically challenging when we consider the contrasting backgrounds of the artists. On the one hand, we have Bufano who came from a working-class socio-economic background and who struggled to make a living as an artist. She committed suicide in 2013 and questions continue to swirl around the reasons why she took her own life, including assumptions that some of this may have been attributed to her struggles with her lived experience of disability. On the other hand, Stelarc is an acclaimed international artist who continues to enjoy a great deal of public arts funding for his projects as someone who has never beheld a lived experience with disability through his own corpus. Stelarc starts with a body that is a “blank slate,” so to speak, and then is in a privileged position in which to manipulate it.

By offering this example, Sandahl was aiming to ask: who can safely challenge what is human? What are the limits and boundaries of cultural appropriation? Did the Bufano piece lose its political power, where it aimed to showcase her expertise and beauty on prosthetic legs dancing across a stage, when contextualized against Stelarc’s own transformative corporeal engagements with aesthetics and movement? Based on my curation of this exhibition, did I therefore fail to incorporate a critical disability studies approach? 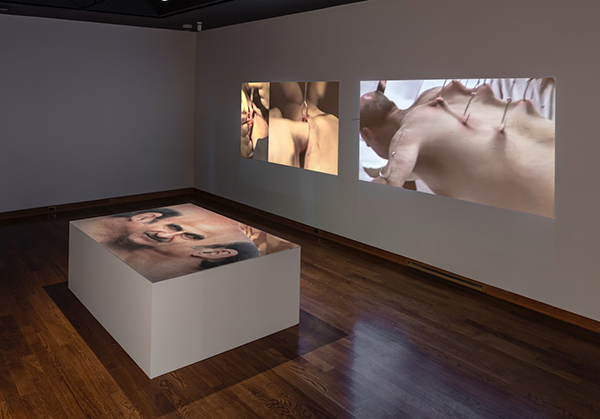 What I would argue is that context is everything. It is true that the identity of the artist should be and can be ignored when looking at a work of art, and that it is important to take a work of art on its own terms, separate to the identity of its maker. However, I would also agree with Sandahl when she says that given that disability is always already over-determined in popular culture and the media, we cannot take this identity (of artist, curator, or audience member) for granted, and that it cannot be disavowed or ignored completely (such as the backgrounds for Bufano and Stelarc). Even my own identity as a disabled scholar and curator is very much highlighted in all the work I do as a scholar, so I understand how my own positioning must be articulated within this argument and framework.

But I don’t believe that it is useful to continue to create ghettoizing narrow categories and definitions of which artwork belongs with which exhibition, given that the definition of “disability art” that Sandahl offers can be construed as one-sided and responding to a limiting set of cultural and political concerns for a small community. Indeed, to discriminate and demarcate boundaries of what is “for” or “against” the objectives of disability art is to problematically re-inscribe the categories that I seek to question and break down through my curatorial practice. Sandahl’s uncomfortable response to these juxtapositions is, in fact, good, given that this was partly the point – to move one out of a comfort zone in order to question, ponder, and reconsider. The work of a curator and scholar is not about creating comfort or correctness (even ostensible political correctness which is also subjective). Indeed, I am very interested in pushing buttons and creating spaces that puzzle and cause one to question. 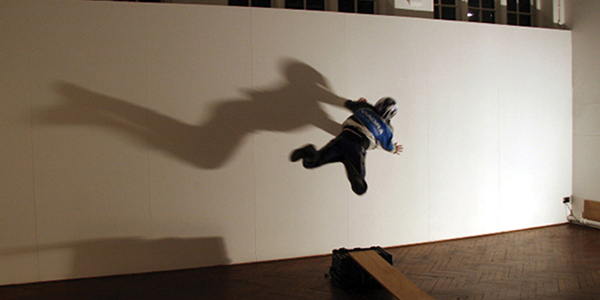 I argue that there is new knowledge to be had by considering artworks side by side that may confuse the traditional reception and interpretation of those works, including body art from the 1970s and so on. I’m interested in the same questions that Sandahl posed in her lecture: How might disability and art and culture be read or understood in the context of this exhibition? How might other body-based art be informed by the presence of disability art within an exhibition? Sandahl claims that disability art is emptied of its political dimension and critique, and its intent is watered down in my Flesh of the World exhibition and in other artistic examples. But she also says that disability is a relational experience that is shared with others.

It is here that I suggest that this engagement should be embraced within an exhibition context. What happens when the body of Bruce Nauman rubs up against the body of Aaron Williamson, who gestures and even mocks the performance art of the 1970s in his short video Artist Hung on Gallery Wall? Or when we consider Ann Hamilton’s images in juxtaposition with Carmen Papalia’s performances: how do they each depart from, contribute to, or complicate each other’s practice? If the works lose their original meaning, why is that a bad thing when new meaning can be found instead? Isn’t this the role of the curator/scholar/artist as provocateurs and producers after all?

The point of the strategy I propose and use is to offer generative political dimensions when we see them in conversation with one another. I believe that these material object relations considered in an exhibition allow the viewer an opportunity to trace a lineage of one work to another, and a development in performance practice and politics that demonstrates how disability was either neglected or embraced by artists, subconsciously or consciously. I want to encourage a reading that is more complex and multi-dimensional than the narratives typically found in art history or within organized communities with specific political objectives in mind.

As Sandahl offers in her same lecture, “disability art and culture enriches and complicates the avant-garde’s focus on the body (where the body was used as a site of anti-representation)…disability and illness experiences raise the stakes on the body as metaphor and flesh.”[2] Indeed, we might even be able to argue that “disability art” and “body art” are more alike than we think, given they both ostensibly use the body as a source or departure point for questions around representation. Part of what we might discern in contextualizing the art of earlier generations of ostensible “mainstream” artists who belong to the canon in contrast to those occupying the margins and who offer revisionist art practices is that experimentations of, and with, the body are actually much more variegated and diverse than we were previously led to believe.

While I agree with Sandahl’s notion of unacknowledged privilege, by putting work by “privileged” able-bodied artists alongside those who identify as physically disabled, the viewer will also be able to question the nature of this privilege, along with questions around agency, body-centered assumptions, entitlement, power and control, authenticity, and the possibilities and limits of certain bodies over others. The key difference is that while many non-disabled artists “disable” themselves through their art in order to gain a new perspective through this new physical modality, disabled artists use the script of their daily negotiations with their corpus to influence and inspire their art (implying that their lives are an art, as Neil Marcus famously once said).

The work of David T. Mitchell and Sharon L. Snyder is greatly influential here, because they suggest that alternative characteristics and attributes must be written into canonical art historical scripts regarding the disability experience. As they write in Narrative Prosthesis: Disability and the Dependencies of Discourse, “disability as a category of human difference cannot be absorbed into a homogenizing scheme of people’s shared attributes,” particularly in contemporary art representations. Disability is not a homogenous category, on behalf of which certain artists are entitled to speak. Historical responses to disability vary greatly, and, according to Mitchell and Snyder, a much looser “coalition” with some shared characteristics and experiences within marginalized identities is important to maintain. As I continue to curate work about disability, I will bear in mind the tensions and schisms within the collective identity of “the disabled” and “disability art.”

Amanda Cachia is an Assistant Professor of Art History at Moreno Valley College in the Riverside Community College District in Southern California and the Director of the Moreno Valley College Art Gallery. Previously the Director/Curator of the Dunlop Art Gallery, she has curated approximately forty exhibitions, many of which contain social justice themes and content. Her group exhibition Automatisme Ambulatoire: Hysteria, Imitation, Performance opens this fall at the Owens Art Gallery at Mount Allison University in Sackville, NB.

[1] To watch and listen to the interview in full, visit http://fleshoftheworld.ca/programming/ Accessed July 1, 2019