Exhibition reviews are usually about art as the destination, but my highlights from the past year of searching and seeing were all about the journeys that got me there. The art is the pay-off, but the stories behind the gallery-going are the adventures I’ll remember and they reflect the foundational people and places that make the culture possible. 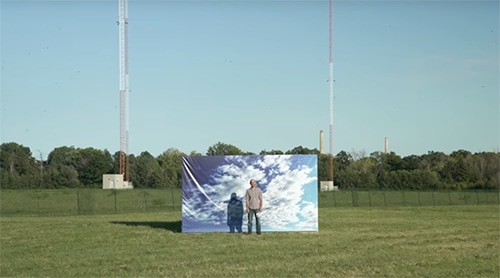 Paul Walde, Of Weather (for Geoff Hendricks), part of the work of WIND AIR LAND SEA, as seen on AkimboTV Views(photo: Lulu Wang)

If I retain one memory of being a professional art commentator from 2018, I would like it to be my frantic late afternoon/early evening hot rodding around a Mississauga industrial park with Views co-director Lulu Wang as my co-pilot when we documented the final day (no re-shoots!) of the gargantuan exhibition the work of WIND AIR LAND SEA presented by the Blackwood Gallery for ten days this September. I have a soft spot for site-specific shows where the art world comes face-to-face with the general public and has to re-evaluate its self-presentation, pretenses, and resilience to the elements. The theme of climate change and environmental crisis practically necessitated this collection of international artists be outside, so it was perfect that we were there on such a beautiful day (check out the episode here). The whole experience – getting away from downtown Toronto, hunting for art with the help of a map, running into friends, chatting with strangers – was a blast. And the art was pretty good too! 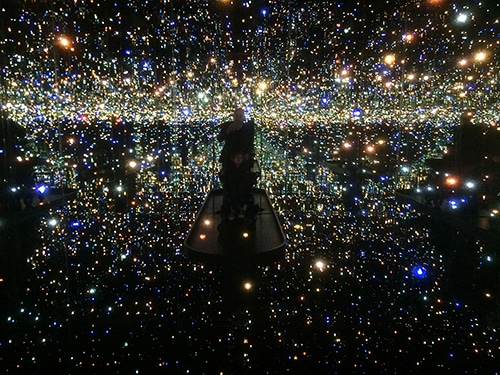 Yet another selfie taken in Yayoi Kusama’s Infinity Rooms at the Art Gallery of Ontario (photo: Terence Dick)

My antipathy to lining up kept me away from the Art Gallery of Ontario’s blockbuster exhibition of Yayoi Kusama’s Infinity Rooms until an old friend who happens to work there offered me and my wheelchair-riding son a pre-opening hours peek at said rooms. We still had to stick to the allotted seconds of viewing time, but I’d already seen a couple of Kusama’s mirrored boxes before and my kid tends to get overwhelmed by visual stimulation so I was fine with the glimpse minus any hours-long wait. In fact, I was happier catching up with my friend, but having a chance to see the thing everyone had been talking about got me rethinking my scepticism around hugely popular exhibitions and what they all mean.

I like visual art because it isn’t popular, so I can visit galleries and be alone with art. Those isolated, unmediated experiences are increasingly rare. I also like my art to resist easy interpretation and reward contemplation, which doesn’t translate into crowds. At the same time, I understand the economics of the institutions and no one can justify an empty gallery, so numbers count. But the last couple of big name acts that filled the halls of the AGO (David Bowie and Guillermo del Toro) pandered to celebrity and popular culture, so it was inarguably awesome that the attraction this year was a celebrated contemporary artist with historical significance who also happened to be a woman and an artist of colour. Beat that, MOMA with your Bruce Nauman retrospective and Whitney Museum with Andy Warhol yet again.

At the opposite end of the exhibition spectrum were two temporary galleries that demonstrated the unstoppable urge to make and present art in environments that like art but make it hard to survive as artists (such as a city with ever-increasing rents and ever-fewer vacancies). Roving art space ma ma made its home for part of this year in transitioning warehouse on Dupont. The exhibition I saw was inspired by gardening and I can think of no better metaphor for cultivating culture. Bunker 2 has been around a bit longer, but I stumbled upon its current home in a parking lot a block north of ma ma. The clever directors of this gallery/shipping container pay the cost of a parking spot to afford square footage for their artists. Tough times call for creative measures and if you can’t rely on artists to come up with workarounds, who can you rely on? That little bit of optimism is just what I need for a year of political pessimism in spades. Here’s hoping those of us in Ontario can survive 2019!