When I moved to Montreal just over ten years ago, I picked up a copy of an artist-run centre directory – the fledgling art critic’s Lonely Planet. After counting as many parallel spaces in the province of Quebec as there were in Ontario and BC combined, I felt like I’d arrived in a contemporary art paradise. Looking back over the last year of reviews, the value of this deep tradition of publicly-funded spaces in Montreal has been confirmed for me.

Among my highlights for the year are two artist-run centre exhibitions: curator Zoë Chan’s Performing Lives at Optica and Atelier Céladon’s Whispers That Got Away at SBC. In both, the works on offer dealt with identity formation in marginal and diasporic communities, and the enduring virtues of care and humour within them. They were also international, with Anishinaabe and Inuit, American, Mexican, French, and Iranian artists taking up topics ranging from traditional hunting techniques in the North, to proto-feminist mythology in ancient Greece, to the Guatemalan Civil War, the situation of the Roma in France, and the Caribbean Canboulay festival.

Montreal is also a hotbed of DIY artist activity. A third notable exhibition of the year for me was Ai Ikeda’s at the short-lived St. Henri garage-cum-gallery Calaboose. Ikeda’s paintings and ceramics were set in the flood-lit garage for an allegory about post-Fukushima environmental catastrophe featuring tiny mutant fruits and giant phallic salamanders. The founders of the space – Danica Pinteric and Garrett Lockhart – seem poised to do more innovative programming in the years to come. And after a recent announcement about an NGC-sponsored prize for small galleries and artist-run centers, the chances of survival for projects like this in and beyond Montreal are stronger. For a less sanguine and more probing check-in on the city’s DIY and artist-run culture, on its alliances with real estate and commercial interests, and its occasional lack of political vision, see Saelan Twerdy’s excellent article in MOMUS.

One of the works in Ikeda’s exhibition, Mutation Series #1, was a personal gem. In it a tiny Mexican salamander is shown peering out of a translucent membrane with the planet earth at its back and an uncertain future ahead. With just over a month until my daughter’s birth, this picture captured my trepidation and giddy hope about parenthood. Above all, that’s what 2018 has been for me – a year of beginnings! Looking backwards over the year for this round-up feels forced as a result. So, I’ll take some liberties and add two favorite contemporary art moments about charmed beginnings and utopian visions of the future. These won’t make the official top-three list, but they’re key entries in my sappy dad-critic’s diary. 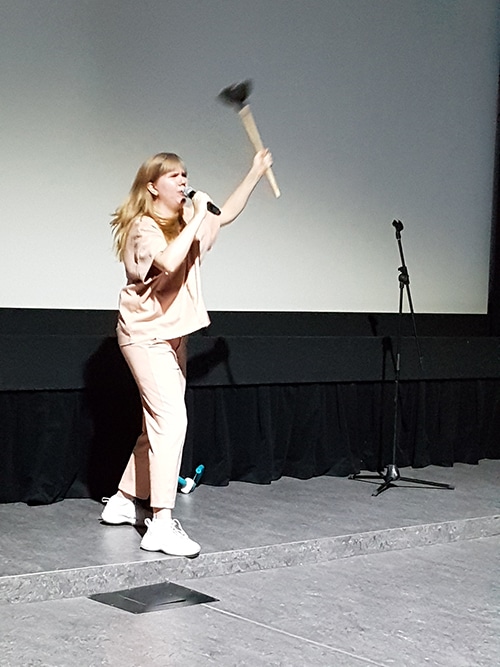 Bridget Moser’s Conversations in Contemporary Art (CICA) presentation at Concordia University was wonderful for beginnings. Full disclosure: I’m cheating here since I scheduled the talk, and because it wasn’t an exhibition, but Moser very generously included a performance interlude about halfway through. She launched the talk with tongue-firmly-in-cheek stories about formative experiences, including watching an episode of the TV show Boy Meets World in which an adolescent character debuts her performance artwork for a totally uncomprehending boy, and a shirtless stage-crashing stunt by Moser’s 2012 Banff Residency mentor Michael Portnoy during Bob Dylan’s performance at the Grammy’s. On a more serious note, Moser’s approach to beginnings has been described in semiotic terms as a kind of “zero-degree” for prop-comedy in which the utilitarian identities of objects – toilet plungers, ironing boards, thigh masters, etc. – are cleared away for her almost interpersonal interactions with them. See the talk here.

One last highlight: Shana Moulton’s Whispering Pines at Centre Clark. The title speaks to the artist’s beginnings in a trailer park near Yosemite Valley, but the multimedia work also imagines, via the Alice-like adventures of Moulton’s alter-ego Cynthia, a fulfillment of the New Age promise of communion with nature, perfect psychic and physical health, and the everyday enchantment offered by well-chosen home decorations. These are pursued by Cynthia in a friction-free virtual space where nature is pictured as a screen-saver image, the secrets to psychic and physical health lie in self-help mantras, and everyday enchantments are a click (or a consumer choice) away. It’s hard to ignore the work’s message about the squandered legacy of the counterculture of Moulton’s parents’ generation, but its restless energy, un-precious humour, and sheer dreaminess are cause for hope in better worlds to come.