Thinking about the past year as a new resident of Calgary is, in some respects, a difficult endeavor. What comes to mind first and foremost are the various instances when support for trans-visibility and a discussion around gendered-violence arose in the city. This began when Jordan Petersonwas booked to present a talk at Arts Commons, one of Calgary’s largest arts organizations. The transphobic professor’s rhetoric creates an unsafe space for those who fall outside the heteronormative patriarchal spectrum. When the city’s artist-run centres, including The New Gallery, Marion Nicoll Gallery, Stride, Truck Contemporary, and Untitled Art Society, came together and penned an open letter requesting that Arts Commons reconsider hosting the talk, both Peterson and Arts Commons shut them down in the press, offering the line that they “… support and fight for free speech…” whether it is in support of minority views or with those that disagree with them. What was really outstanding about this event was the momentous movement with which the people within the local arts community came together to support one another in this fight against oppression. 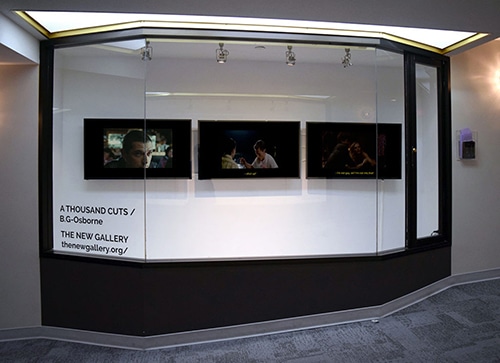 Concurrent to this, the exhibition A Thousand Cuts by Montreal-based trans artist Beck Gilmer-Osborne was on display in the New Gallery’s +15 gallery space – a venue hosted by Arts Commons. The three-channel video features found-footage of cisgender actors performing in transgender roles in both film and television. It also includes a list of all documented cases of transgender people who have been murdered in the past two years. The title itself is weighted with meaning, both literally and figuratively. Imagery is spliced together from many sources but it also points to the enacted and reenacted violence on transgender bodies. What compounded the erasure and violence against trans bodies highlighted in the work was Arts Commons decision to remove it. In September, the institution pulled A Thousand Cuts from the +15 window gallery, claiming it was inappropriate for audiences due to obscene language and nudity (https://canadianart.ca/news/arts-commons-censorship/). Again the artist-run centres in the city came together in support of one another and the artist to further the discussion on the censorship of this artwork. In an act of solidarity, Truck Contemporary, The New Gallery, Untitled Art Society, Marion Nicoll, and Stride all pulled out of hosting exhibitions in the +15 window galleries – a space that has been part of the artistic cultural scene in Calgary for decades.

In response to these events and to support the issue of censorship, particularly surrounding transgender artists, violence, and censorship, Untitled Art Society invited transgender two-spirit artist Dan Cardinal McCartney to perform Misgendering Mouthfuls. McCartney was set to exhibit and perform in the +15 window gallery space with Untitled Art Society until the partnership between Arts Commons and the artist-run centres was cancelled. In a moving and poignant act, the piece performed at Untitled’s main gallery space spoke deeply to the violence that these acts of censorship create and have historically created within the LGBTQ2+ community, while also provoking if not resolution, internal support that was needed.

I am often asked why I made the move to Calgary. If anything, this year of support within the city’s arts community is reason enough. In choosing Calgary to be my new home, I had an idea that the city’s arts and culture community was a unique one in Canada, but I had no idea it is as supportive as it has proven to be this year.