When Edouard Manet exhibited In the Conservatory, critics accused him of making concessions to the public. The painting features a well-dressed couple in a greenhouse, comically missing each other’s vacant stares and looking rigid amid an explosion of plant life. More recently the “excessively finished” work was read as an “anxious attempt to reconsolidate the visual field in whose disassembly Manet had already participated.” For art historian Jonathan Crary, the malaise of modernity is signalled in the “fraudulent earthly paradise” of a greenhouse.

Coetus Floreus at Galerie Nicolas Robert might also be mistaken for a conservative display of skillfully rendered flowers, figures, and faces. Continuities between the honeymoon phase of European modernity and our more circumspect late-capitalist era appear throughout the exhibition. But if the motif of flowers was used by Manet to stage a conflict between nature and culture, this group exhibition exposes our tendency nowadays to recode nature as culture. 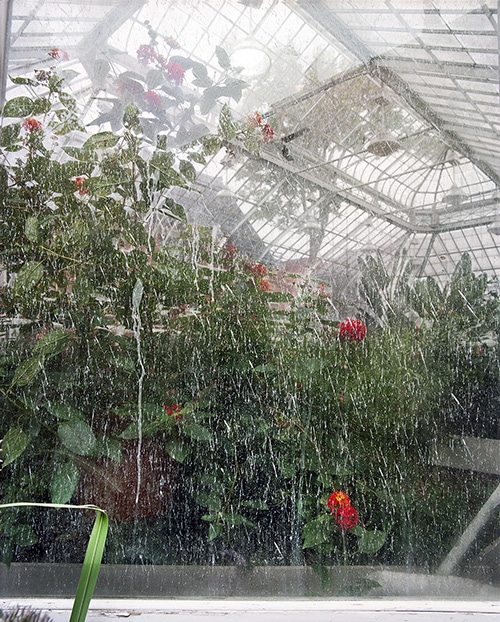 A provocative link is made between Manet’s century and our own in Lorna Bauer’s The Westmount Conservatory and Greenhouse. Bauer began photographing the iconic Westmount building between its renovations while preparing for a residency in Paris to study the green spaces of Baron Haussmann’s 19th Century urban renewal program. The photo’s middle ground is occupied by zinnia flowers visible through paint, plaster, or milkshake spatter on a pane of glass. In the background, the building’s ceiling recalls Montreal’s Victorian past as a lone leaf in the bottom-left corner breaks free from the picture into the viewer’s space. Mocking our desire for a direct encounter with the organic, a bronze bamboo leaf sculpture hangs nearby, fully liberated from the greenhouse’s architectural space but frozen in the gallery’s commercial space.

A line between real and simulated encounters with nature is drawn as well in Michelle Bui and Gillian King’s works. Bui’s fake flowers are arranged in an arch pattern and flattened on a metal grid. No attempt at authenticity is made. Dollar-store models for the daffodils in Dimanche were selected for their “synthetic look,” and the translucent resin flowers in Sunny Day Out are like hung skins or glittery candy “licked into shape.” By contrast, King’s Iron Yolks is painted with pigments extracted from rose petals, irises, ferns, onion skins, wildflowers, and rust sediment. Her marks are indexes of a direct encounter with materials gathered in the Ottawa area, but their gestural energy conveys a tactile memory of, or ritual communion with, nature more than an objective record of it. 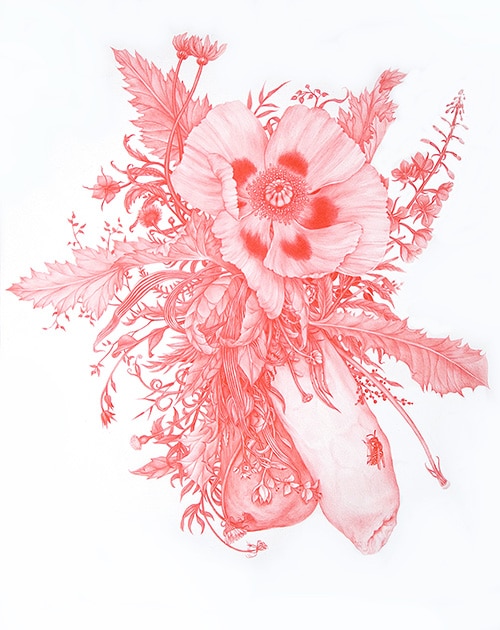 The flowers in Kris Knight and Zachari Logan’s works lead through a web of references, from the campy to the crafty, to the romantic or erotic, and once again back to the 19th Century. Knight’s paintings feature an ephebic figure laying in tall grass and clovers, or peering out coyly from behind a hand fan inspired by 19th Century socialites and 21st Century TV drag queens. In Slipping PetalsKnight turns his flowers and porcelain-smooth faces with deference toward Oscar Wilde. Pressed roses appear on the inside cover of The Picture of Dorian Gray, wilted, dead, and dying like the novel’s protagonist.

Logan’s dazzlingly well-executed pastel drawing on black paper titled Dead Flowers I engages the same themes of impermanence, longing, and loss, but the work is also an homage to the 18th Century paper artist Mary Delany. His tissue of references thickens in a diptych titled Moon Roses (after Debussy/after Verlaine) but Logan is careful to make emotional rather than academic connections with these artists – with the austere and somber approach of Delany for instance, and with Debussy’s uncluttered evocations of still and lonely moonlit nights.

Logan’s two small red crayon drawings parse the flower’s personal, natural, and cultural significance. The artist appears in Naked in the Roses from the waist down walking through an overgrown field. Our view is obstructed by an impossibly detailed drawing of a rose near the centre of the composition. At once a cover for the voyeur and an intricate design for a dispassionate viewer to peer into, the rose here is ambivalent.

In Hives 2 the distinction between a flower’s simple beauty and its erotic charge is sharper. A large poppy, ferns, and leaves are arranged around a penis, like pubic hair, or more amusingly, like a boutonniere with a fleshy pin. The drawing follows a rule for Logan’s entire Wild Man series of merging plant material with figures and faces, but here the combination presents a functional equivalence. As the artist notes, despite our romantic investment in flowers, they are, as a matter of fact, “the sexual organs of plants and the part of them we are most attracted to.” As the works across the exhibition suggest, our feelings, beliefs, and traditions are unavoidably caught up in the folds of these living, growing, dying, and always culturally coded natural things.