Chrysanne Stathacos wasn’t an emerging artist when I first heard of her, but she was new to me. It was the summer of 1999 and I was working as a gallery attendant at The Power Plant. To prepare for the exhibition of her Wish Machine, we had to spend a day in a back room filling hundreds of tiny Ziploc bags with a small photocollage and a miniature vial of essentials oils. My memory of that day and the inescapable association I have with that piece and this artist is dominated by the horrific hangover I had due to a post-music festival debrief the previous night when a bottle of port was consumed. As I held my gagging in check and kept my breathing as shallow as possible, I counted the minutes and fiddled with the finnicky bags while the pungent smells invaded my nostrils. The rest of the summer was a breeze in comparison and I’ve only rarely come across Stathacos’ work since then, but the vivid recollection of that nauseated experience (one diametrically opposed to the intended effects of the artwork in question) remains a touchstone in my personal history of altered states. 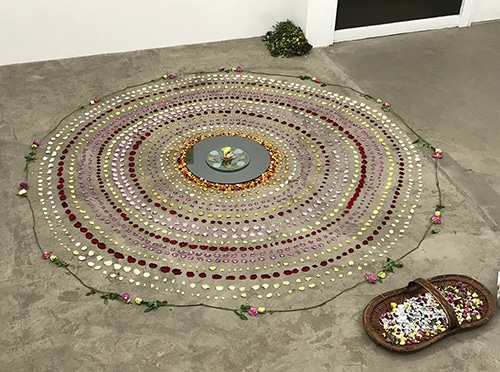 Speaking of altered states, I can’t help but guess that Stathacos’ current appearance at Cooper Cole has something to do with the recent legalization of cannabis in Canada. Her paintings and prints on canvas feature marijuana leaves as well as ivy and create a hybrid representation-abstraction that takes the natural patterns of vines and leaves, and transmutes them through pigment into timeless records of the psychedelic potential in these plants. Pleasant enough as visual stimulants, what gives them further resonance is the residue of the living things that made them. A selection of these works were completed in the 1990s and intended to have a healing value. With the passing of decades, they carry not only imagery but also connect people through time. Art is that wonderful, horrible magic that takes life and renders it inert as well as the reverse by making dead things feel alive. This cycle is realized in the flower petal mandala Stathacos has been creating and will continue to contribute to as it too changes through dehydration with the passing of every day. Circles within circles, dashes of colour, each one on its own journey, each one a part of the greater whole, each one in danger of being blown away by an errant breeze each time a visitor enters the gallery. 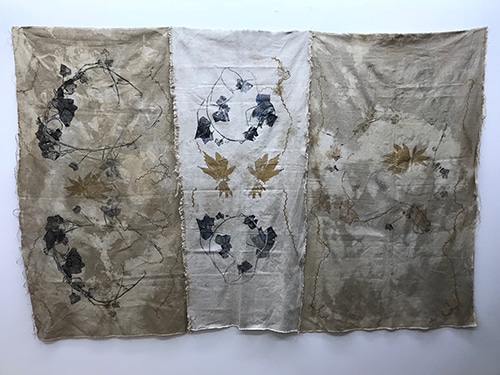 Given Simon Cole’s penchant for exhibiting artists from the past (Vikky Alexander, Scott Treleavan) alongside his coterie of more recent talent, I shouldn’t be surprised by his inclusion of Stathacos in his exhibition schedule, but it was a pleasant reminder of the larger scope of time that encompasses art history and the artists who keep contributing to it. Her works were also a reminder – one I need after spending too much time popping in and out of galleries, week after week, year after year, looking for the newest thing – that art is meant for the long haul, not for passing glances. These works have lives of their own and become companions over time. Some might be more fragile than others, but they all connect us to a vibrant history and a living engagement with the world. At the start of a new year, looking back is as important as looking forward, and this exhibition provides an excellent opportunity for both.