Carl Beam: One Who is Brave-Hearted is a concise and compelling retrospective of one of Canada’s most influential artists. An Ojibwe painter and printmaker from M’Chigeeng First Nation on Manitoulin Island in Ontario, his colourful and complex works center on Indigenous and colonial concerns in the contemporary cultural narrative of his time, but they are as relevant and vital today as they were twenty or thirty years ago. 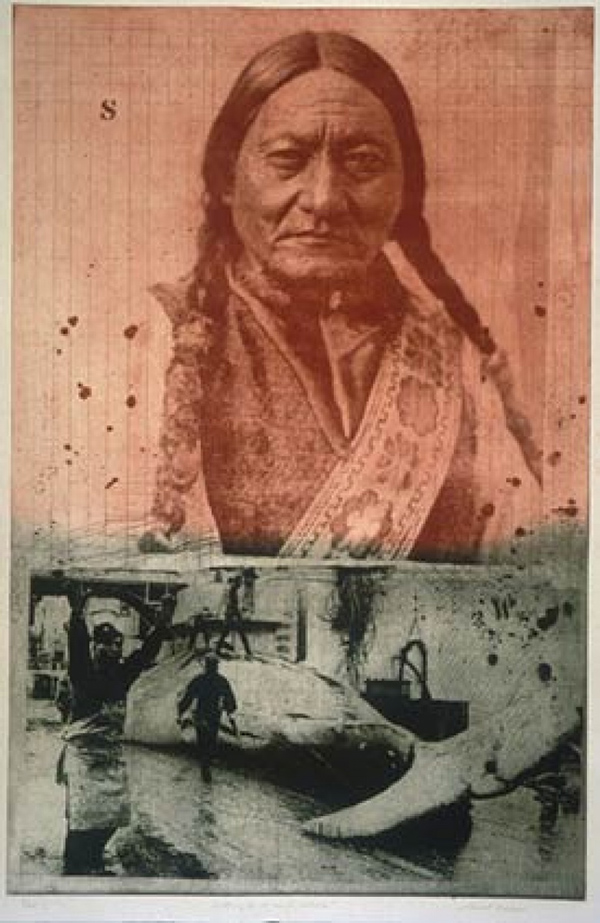 The Beaverbrook Art Gallery exhibition reaches back to the eighties and his large and expressive paintings full of drips, poetic text, and multiple images before moving on chronologically to include a wide range of prints and concluding with his striking Columbus Suite. Regardless of medium there is a consistent aesthetic and singular voice. Beam is a master of both the medium-specific language of Abstract Expressionism and the Pop-influenced language of found images and collage.

While he pushes boundaries in technique, of equal or perhaps more importance is how he plays with iconography. His paintings and prints are visual poems and essays full of Indigenous images and themes that challenge the narratives of North American culture and history. A conversation is initiated that is very different from that of the work of his contemporary influences such as Robert Rauschenberg and Andy Warhol. Somehow Beam uses what might appear at first to be random combinations of images to create tension and dialogue with an underlying sense of unity. The juxtapositions are wonderfully specific to his life and time, but also shockingly relevant to the present.

All of Beam’s themes come together in his magnum opus from 1990: the Columbus Suite. Spanning one entire wall, these beautifully printed, richly saturated images of Sitting Bull, John F. Kennedy, Louis Riel, Christian iconography, Columbus, animals, and modern technology form a humming, complex collection of ideas woven together in a narrative pointing to pressing issues of identity, oppression, environmental catastrophe, and the weight of history. In this sprawling piece, different worlds collide to reflect the one we inhabit with all of its beauty and flaws.

The work is perplexing and this is Beam’s intention. His words on the gallery didactic say it best: “My works are like puzzles, interesting little games. I play a game with humanity and with creativity. I ask viewers to play the participatory game of dreaming ourselves as each other. In this we find out that we are all basically human.”

In the end perhaps the magic of the late artist’s work is that there are no easy answers, and that the clues are more important than the conclusion. Looking, thinking, learning, and being engaged with the world – and all its problems – is the most pressing thing. I certainly don’t know the answers to Beam’s visual riddles, but I do know that I love to play his game.

Carl Beam: One Who is Brave-Hearted continues until September 15.
Beaverbrook Art Gallery: https://beaverbrookartgallery.org/en/
The gallery is accessible.