I saw perfect prisms and multicoloured, meticulously drawn parallel lines and – admittedly – checked out. I was overcome with a feeling of emptiness. This I attributed to the number of artists doing paintings of parallel lines in art school which, I joke, numbed my ability to view line paintings as anything other than someone’s 4:20 bong hit. However, as I came across Antonietta Grassi’s diptych Fils de Sources, which appears to be the aerial view of a weaving on a loom, I was forced to reconsider this exhibition and all geometric works I had previously viewed and conceptually fixed.

Grassi writes of her exhibition at Harcourt House Artist Run Centre, “After the loss of both my parents in a short period of time, I began to integrate structure and geometry into my work as a means to contain the chaos and grief that ensued.” Prisms, the illusions of folds, and sparkling thread lines can be made out, layered over penetrating shades of orange, Pussyhat fuschia, Post-it yellow, and fax machine brown, in her collection of oil, acrylic, and ink paintings titled Contemplations for Obsolete Objects: Postscript. Grassi’s background as a designer and colour forecaster (a researcher and interpreter of colour trends in Montreal’s garment district) makes colour for her a broader cultural thermometer. Her choices reflect both the socio-political climate and the process of having to throw out much of her parents’ now-obsolete collection of objects: sewing machines, fashion patterns, old computers, and beige filing cabinets filled with yellowed documents. Colour is both personal and public.

Considering structuralism as a means for containing grief, Michel Foucault’s examination of the space left by death comes to mind. In discussing the “death of the author,” he considers the historical legal process through which individual property has become associated with name, tracing it back to Roman law, which defined the legal existence of the individual. For Foucault, property is a purely legal thing that is separable in meaning from its “owner” or “author.” Once it is separated from that owner, where does the property lie? What is done with this absence of the owner? For him, their name remains and continues on as a form of encrypted knowledge. (Credit should be given here to Daniel Laforest’s brilliant lecture, “Michel Foucault & the author & etc.,” given in Critical Theory II on January 22 at the University of Alberta.) 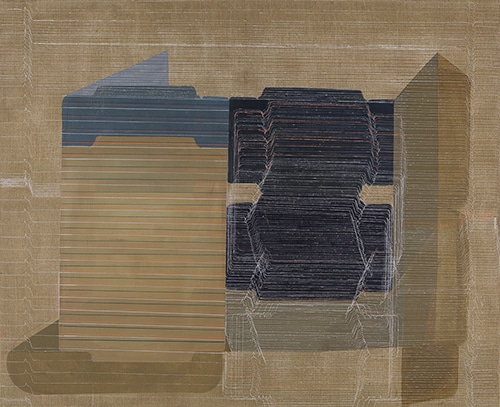 I have recently re-introduced sewing and beading into my own life, as some form of encrypted knowledge of my mother and grandmother. I started out by using the patterns my mother used at my age, cut where she cut, pinned where she pinned, folded where she folded. Tactile experience and “owning the means of production” in a guild-like sense have become obsolete for many women today under capitalist society. If you are sewing, often it is in the conditions of a bound labourer, realizing the dreams of another designer for little pay. As Grassi writes, the experience of viewing deeply is “something which is perhaps in itself precariously scarce and obsolete in our present time.” In her act and propagation of “viewing deeply,” she examines the space created by absence as she would colour – as an imprint of realities past and present. It is both intuitive and methodical, “emotional and removed” – as she endeavours to be. Grassi has both touched and scared me.

Lindsay Sorell is a Métis artist, writer, and MA student in the Department of Modern Languages and Cultural Studies at the University of Alberta. She researches decolonizing political theory and cultural criticism, Métis history and identity, and Indigenous practices of sovereignty and resistance. She is the Research Assistant for Dr. Laura Bear and is Akimblog’s Edmonton correspondent. Follow her on Instagram.