Winter Exhibitions at The Power Plant

Launch the New Year with us and experience three major exhibitions by artists Omar Ba, Shuvinai Ashoona and Alicia Henry this Winter 2019 Season. On view 26 January – 12 May 2019, The Power Plant presents three exhibitions by artists who draw from deeply personal iconographies to reveal complex worlds intertwined and shaped by histories and identities to reflect on our past, present and future.

The Power Plant also presents a variety of opportunities through public programming for all to extend their exhibition experience. Visit and attend a workshop, performance, film screening, artist talk or other activity!

Omar Ba’s work engages with some of the most urgent issues of our time: the growing inequality of wealth and power globally, questions around immigration, and our changing relationship with the natural world. His penchant for depicting personal narratives alongside collective ones speaks to the “in-between” condition of his work, as he splits his time between Dakar, Senegal and Geneva, Switzerland. As such, Ba draws from a range of elements and techniques —the historical and contemporary, figurative and abstract imagery—from African and European cultures. He prepares his surfaces—whether cardboard, canvas or wall—with a black ground, upon which he layers a vivid palette dominated by primary colours. His paintings teem with details as micro-worlds transpire within larger constellations, oscillating between bold planes of colour and intricate outlines, which unravel across their surfaces.

Same Dream brings together several of Ba’s paintings depicting dictators and authority figures, who lead corrupt and violent regimes in those parts of the world where the legacies of colonialism persist. At times represented as hybrid beasts—part human, part animal— these despotic warlords are typically enveloped in an abundance of lush flora and fauna inspired by Senegal’s dazzling coastal environment, where Ba grew up. The exhibition also presents works that reveal Ba’s affinity for portraying the strength of the human spirit—depictions of youth who, regardless of where they are, share some of the same dreams for the future.

For the exhibition at The Power Plant, Ba has developed a new large-scale work directly on the walls of the gallery, exploring a recurrent motif of birth, death and reincarnation across different cultures today. 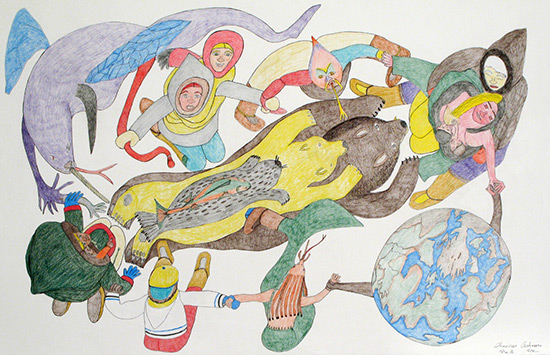 Mapping Worlds presents a selection of works on paper produced by Shuvinai Ashoona over the past two decades. Though many of her early drawings depict daily life in Kinngait (formerly Cape Dorset), Nunavut, continuing an artistic tradition begun by the artist’s grandmother Pitseolak Ashoona (1908 – 1983) and first cousin Annie Pootoogook (1969 – 2016), she is best known for developing a personal iconography, with imagery ranging from observed naturalistic scenes of her Arctic home to monstrous and fantastical visions.

This personal iconography, consisting of human-animal hybrid creatures, women birthing worlds and barren landscapes that appear to be post-apocalyptic even though they are inspired by the terrain of her northern home—to name but a few—project the past and present into an otherworldly, almost prophetic future. And, unlike many settler visions of times to come that focus on violent clashes between humans and nature, humans and other humans, or humans and otherworldly ‘invaders’, Ashoona’s earthly and extraterrestrial worlds exist within a kinder intergalactic future. By inviting us into her world, inner and otherwise, Ashoona makes it possible to further broaden our conversations about climate change, the role popular culture plays in Arctic communities and, importantly, the ways in which Inuit art and artists are presented within Canada and abroad.

Alicia Henry has been exploring unconventional approaches to portraiture, using the face to represent something that is hidden, revealed and performed. She works with felt, canvas and other textiles, as well as leather and paperboard, all of which absorb her drawn and stitched gestures that register a spectrum of human contexts and emotions.

In this, her first Canadian exhibition, Henry’s compelling compositions are drawn from a multitude of references: the artist’s own memories, her collection of West African masks, events on the street and on television, to name a few. Imbued with her perspective as an African American woman, the figures assert themselves as timeless witnesses embodying the impact of personal and social histories. Notions of gender and family are significant in her works, as are physical layers that suggest multiple and unfixed identities.

Henry does not view her art as political but acknowledges that “at this time in the United States, the brown body has become politicized.” In her graceful and expressive installations, a lingering melancholy evokes racial traumas suffered by innumerable groups and individuals, today and over the centuries. But simultaneously—through their direct gaze and attentive composure—Henry’s multigenerational survivors exude a powerful strength and confidence. Perhaps they stand in anticipation of an egalitarian future—a utopian goal that underpins much of Henry’s practice.

ADMISSION: ALL YEAR, ALL FREE presented by BMO FINANCIAL GROUP

Providing as many people as possible with access to these programs and events remains the gallery’s top priority. The initiative leading these efforts is a renewed partnership with BMO Financial Group, whose support of the ALL YEAR, ALL FREE initiative is vital to expanding and diversifying audiences by eliminating the cost of admission to The Power Plant’s exhibition program.