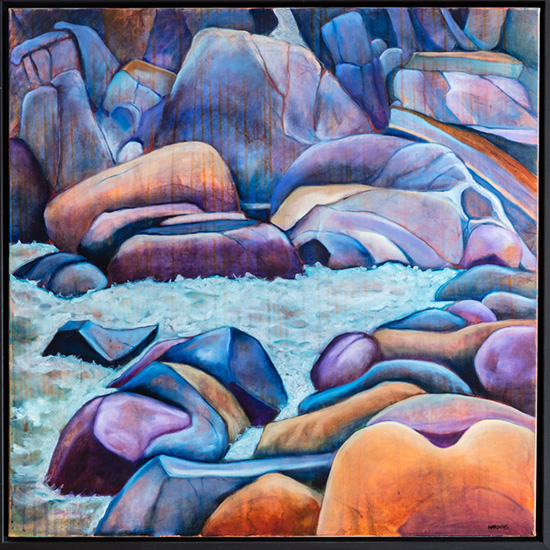 “I paint for the sheer joy of painting. The living colours, lines and shapes give each work a separate existence. The act of painting is a conversation between the work and me. The final painting serves as a record of that conversation.” ~ Tony Marinus Vander Voet

Please join us on Saturday, March 30th from 2pm-5pm at the Queen Elizabeth Park Community and Cultural Centre in Oakville in the Main Gallery for a reception celebrating the life and work of award-winning artist Tony “Marinus” Vander Voet. The series, entitled ICED: Alaska to Southern Patagonia, includes 35 of his last works, and is mounted by Susan McCrae and supported by the Ontario Society of Artists (OSA) in honour of Tony’s work and life. The OSA most recently awarded Tony the 2019 Eleanor Besen Award. The exhibit runs until April 12, 2019 and is free, open to the public, and fully accessible.

A true adventurer, Tony began this series after a trip he took to Alaska in 2016 with his wife and fellow artist, Susan McCrae, to celebrate their 50th Anniversary. The voyage took the pair by boat up the inside passage of the area, over the mountains from Skagway to Carcross in the Yukon; a week on land travelling from Anchorage to Fairbanks, and returning home by bus and train. The journey provided great inspiration and encounters with ice fields and glaciers; images Tony documented through photography. From thousands of photographs he selected a handful of stunning vistas to commemorate and present as paintings.

In early 2017, the duo travelled to Chile and spent a week in the Southern Patagonia Region of Chile, shared with Argentina, home to the third largest ice shield in the world after Greenland and Antarctica, the Southern Patagonia Ice Shield. They visited Torres del Paine, Balmaceda, Serrano and other glaciers in Chile and took a special trip to see Perito Moreno Glacier in Argentina. Paintings of these sites form part of the collection as well, along with vistas of the Patagonian landscape with snow-capped mountains and turquoise, glacier-fed lakes in the distance.

From the series to be exhibited, Inspired by the Glacier is the recipient of the Grand Prize, International Juried Online Exhibition, Society of Canadian Artists. Tony learned of his prize shortly before his death in April 2018. 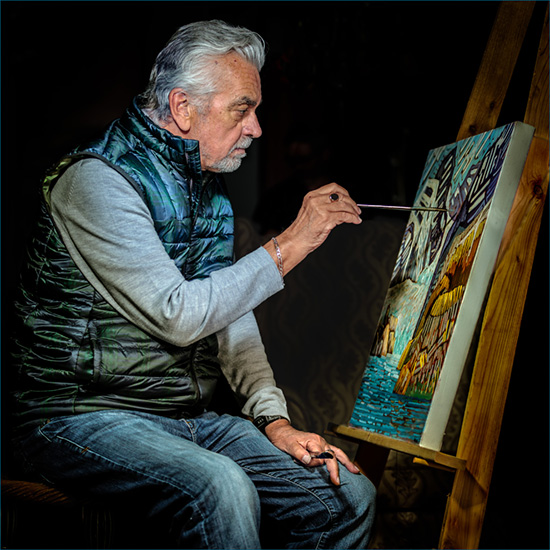 About Tony “Marinus” Vander Voet
Tony was born in Holland and immigrated to Canada with his family when he was five years old. Although he was always an artist, Tony studied sciences at university and graduated with a doctorate in Chemistry from the University of Toronto.

Though primarily a self-taught artist, Tony studied drawing and painting with a number of well-known Canadian artists at both the Haliburton School of the Arts and at the Toronto School of Art, including Harold Klunder, John Leonard, V. Jane Gordon, Peter Kolisnyk, Joanna Nash, Brian Smith and pastel artist Ursula Reese. He also studied printmaking with Otis Tamasauskas, Moira Clark and Stephanie Rayner. He also had a love for fabric arts and has exhibited embroidered drawings, paintings and tapestries.

An award-winning artist, Tony was a member of the Ontario Society of Artists, the Colour and Form Society, Headwater’s Arts in Caledon, Pastel Artists.ca and holds the designation of Master Pastelist. He also sat on the Board for the John B. Aird Gallery for many years.

Having been invited to exhibit his work at several juried shows across the Greater Toronto Area, Tony’s works can now be found in the Government of Ontario Collection (Archives of Ontario) and private collections in Canada, Germany and Chile.