Summer Exhibitions 2019 at The Orillia Museum of Art & History (OMAH) 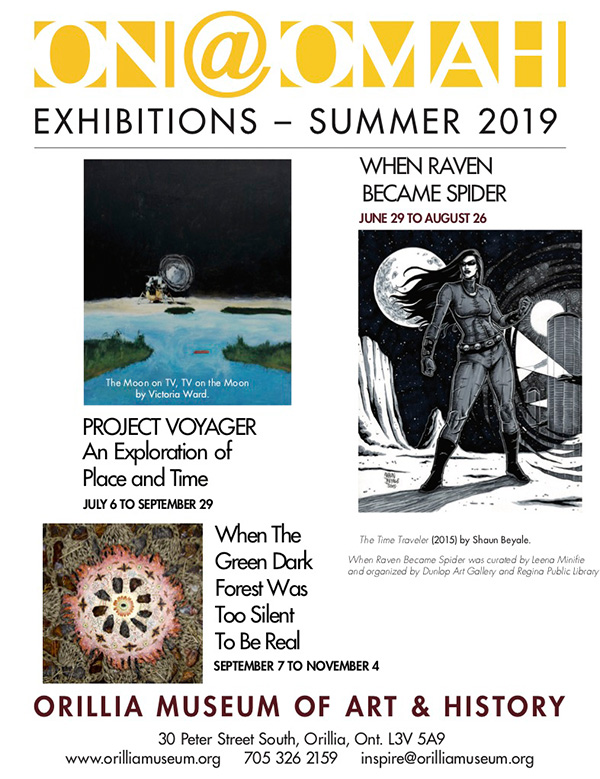 When Raven Became Spider features work by six contemporary Indigenous artists and storytellers whose work blurs the line between modern oral stories and contemporary pop art. Their work prompts many questions: How does the transformation of Indigenous images and stories into superhero tales change modern dialogue? Have traditional tricksters like Raven and Coyote been forgotten, or have they inserted themselves into these popular and widely-accessible forms? And where are their wise, noble, and stoic counterparts, the Eagle and the Badger? Have they lost the fight, or are they still present, silently and invisibly guiding the actions of our enduring heroes? When Raven Became Spider shows works by Joi T. Arcand (Cree), Sonny Assu (Kwakwa̱ka’wakw), Shaun Beyale (Navajo), Julianne Beaudin-Herney (Cree/Mik’Maq/Métis), Elle-Máijá Tailfeathers (Blackfoot/Sami), and Jeffery Veregge (S’Klallam).

An exhibition mash up of a road trip, Champlain’s touchdown in Orillia and the Apollo 11 moon landing by artists Gary Blundell and Victoria Ward, in an exploration of place and time.

Victoria spent her summers in Orillia as a child at her family cottage – a place layered with meaning for her. She watched the Apollo 11 moon landing on a television that her father put on a beach along the shore of Lake Simcoe. He wanted her family to see the televised coverage of the moon landing and the actual moon in the same moment. It is a memory that has become a dream.

As a child Gary immigrated to Canada from England. One thing that was a constant during his childhood were the statues of Samuel de Champlain that seemed to be everywhere he and his family traveled; to Quebec City, in Ottawa at Nepean Point where he has brought to see Can-rock bands like April Wine and eventually also in Orillia. They were everywhere in his newly acquired country.

As such the concept of exploration was something that they had in common with the City of Orillia. With that in mind, in preparation for the exhibition, they did two things. First, they collected together all of Victoria’s mementos of her family cottage and both of their childhood mementos of the first moon landing. Second, in the summer of 2018, they took a road trip closely following the route that Champlain took to travel from the mouth of the St. Lawrence River, to his base of operations in Quebec City and then onwards to Orillia where he spent a winter in 1615.

“The Ground Beneath Her Feet” By Melody Lynn Madden

The suite of works in Exquisite to Sublime will provide a glimpse of Melody’s development as an artist. She began her professional artistic journey in textiles. Having grown up watching her grandmother embroider instilled a value of working with her hands. Her free motion embroidered works are a stage in her seamless transition into painting with oils and acrylics. Her paintings can be as both calm and introspective and powerfully emotional and invoking a sense of freedom.

When The Green Dark Forest Was Too Silent To Be Real

Habitually collecting decomposing/dried botanical matter during hikes and canoe trips in and around the marshes and beaches of Tiny Township, Tina Poplawski has made art out of this botanical world debris. There is an allure in observing the process of decay and transformation that is found in her work. These observations and artistic interpretations are also grounded by the emotional reverberations caused by the enforced displacement of people from their homes by violent military assaults. The impact of war has tarnished her family history. Her parents and grandparents were all imprisoned in the Gulags of Siberia during World War II. Stripped of all that was dear to them, they were amnestied, housed in refugee camps over five continents and then derogatorily labeled “DP’s” or displaced persons.

This exhibition will feature large scale works inspired by the crocheted doilies created by her grandmother during the war, Eastern European folk heritage, botanical matter and animals native to Central Ontario and her environment.

Want to receive 10% off your OMAH shop purchase? Show this email to our front desk staff to get a 10% off discount on your purchase. Redeemable June 25- September 25, 2019.

The Orillia Museum of Art & History (OMAH) is a hub of culture and heritage located down in the heart of Orillia’s Peter Street Arts District. From scientific specimens and photographs, to archives and oral histories, OMAH offers a wide range of research possibilities and interpretive programs complemented by a body of rich and engaging exhibitions. The clock tower of our Sir Samuel Steele Memorial Building is a beacon for our historical location.

The Orillia Museum of Art & History respectfully acknowledges our presence on the traditional territory of the Anishnaabeg. The Anishinaabeg include the Ojibwe, Odawa, and Pottawatomi nations, collectively known as the Three Fires Confederacy.

The Orillia Museum of Art & History is fully accessible.