Sameer Farooq: A bag is a veil is a pillar 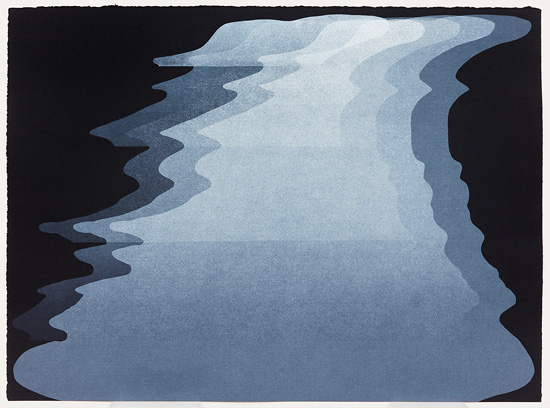 A bag is a veil is a pillar
Sameer Farooq

Desire is produced by a distance—the gap between the eye and the image, the disjuncture between the projected fantasy and the real-life object, the gulf between what you saw and what you recall. It is for this reason that the poet Anne Carson describes the space of desire as “the reach,” in which “the absent presence of desire comes alive.”1 For French philosopher Jacques Rancière, the question is far more prosaic: “Distance,” he writes, “is not an evil to be abolished, but the normal condition of any communication.”2

Sameer Farooq’s recent print and sculptural works investigate both the banal and profound desires that are activated by absences, grounding these experiences in the unlikely place where contemplative meditation and museum display practices meet. In 24 Affections (2019), a series of monoprints developed during a residency at Open Studio, Farooq transcribes colourful but abstracted landscapes recalled from daily visualization exercises. These “internal artifacts” are inspired equally by the spare geometric painted forms created by practitioners of tantric Hinduism in Rajasthan, India—both as a gateway into, and a memory aid for, meditative practices—and by image streaming exercises and intuition training derived from Western manuals on increasing individual creativity. What these practices share is a common investment in the inner world as a site of imagination through intense visualization, and an interest in using somatic exercises to instigate moments of deep completion. The fields of saturated colour that float on black backgrounds are road maps back to these elusive, embodied experiences: they articulate a longing for, and also a promise to return to, the space of the imaginary that perpetually evades our (conscious) grasp. In so doing, Farooq’s works eschew contemplation as an isolated and private experience, and offer prompts for the viewer to undertake her own form of prolonged looking in relation to others.

A different mode of contemplation is prompted by Pouf, Sausage, Weight, Arc (2017), a series of clay objects that mimic the forms used by museum conservators to protect, prop up, package, store and ship artifacts when not on display. Spheres of tissue paper, half inflated balloons, weighted fabric tubes and strips of foam and archival paper are replicated here in meticulous detail, visualizing the everyday labours of care of the technician and conservator. But, by giving form to otherwise negative shapes, these ceramic sculptures also act as place-holders for the things that are inevitably missing from the museum’s holdings. In demonstrating care for not only the work of the conservator, but also for the museum visitor—whose contemplative pathway through the museum is inevitably interrupted by reminders of what is not there, of what she wishes to see but can only imagine—Farooq has created a set of what artist Céline Condorelli terms “support structures.” As Condorelli writes,

“support is not to be reduced to a reactive, symptomatic, and redeeming gesture, but… through its uttering we may be able to hear the unspoken, the unsatisfied, the late and the latent, the in-process, the pre-thought, the not-yet manifest, the undeveloped, the unrecognised, the delayed, the unanswered, the unavailable, the not-deliverable, the discarded, the over-looked, the neglected, the hidden, the forgotten, the un-named, the un-paid, the missing, the longing, the invisible, the unseen, the behind-the-scene, the disappeared, the concealed, the unwanted, the dormant.”3

A relationship of support is, for Condorelli, entangled in the problem it seeks to address: intimate with the lack it hopes to fill in. In creating material manifestations of that which is typically unseen, Farooq’s work makes space for the imaginative capacity of the spectator, and enquires into how the museum (or gallery) might enact similar choreographies of care for the inner lives of their visitors.

Sameer Farooq is a Canadian artist of Pakistani and Ugandan Indian descent. His interdisciplinary practice investigates tactics of representation and enlists the tools of sculpture, installation, photography, documentary filmmaking, writing and the methods of anthropology to explore various forms of collecting, interpreting, and display. The result is often a collaborative work which counterbalances how dominant institutions speak about our lives: a counter-archive, new additions to a museum collection, or a buried history made visible. With exhibitions at institutions around the world including the Aga Khan Museum (Toronto), the Art Gallery of Ontario (Toronto), The British Library (London), the Institute of Islamic Culture (Paris), the Lilley Museum (Reno), Vicki Myhren Gallery (Denver), the Contemporary Art Gallery (Vancouver), Maquis Projects, (Izmir), Trankat (Tétouan, Morocco), Sol Koffler Gallery (Providence), Artellewa (Cairo), and Sanat Limani (Istanbul), Farooq received several awards from The Canada Council for the Arts, Ontario Arts Council, Toronto Arts Council, and the Europe Media Fund, as well the President’s Scholarship at the Rhode Island School of Design. Reviews and essays dedicated to his work have been included in Canadian Art, The Washington Post, BBC Culture, Hyperallergic, Artnet, The Huffington Post, C Magazine, and others. He was longlisted for the Sobey Art Award in 2018.

Gabrielle Moser is a writer, educator and independent curator. She is the author of Projecting Citizenship: Photography and Belonging in the British Empire (Penn State UP, 2019) and her writing appears in venues including Artforum, Canadian Art, Journal of Visual Culture, Photography & Culture, and Prefix Photo. She has curated exhibitions for Access Gallery (Vancouver), Gallery TPW (Toronto), Gallery 44 (Toronto), the Morris and Helen Belkin Art Gallery (Vancouver), Oakville Galleries, and Vtape (Toronto) and is a founding member of the feminist working group, EMILIA-AMALIA. She holds a PhD from the art history and visual culture program at York University in Toronto, Canada and is an Assistant Professor in art history at OCAD University.

On view until Saturday June 1st

HOURS
Wednesday to Saturday, 11am – 6pm
or by appointment