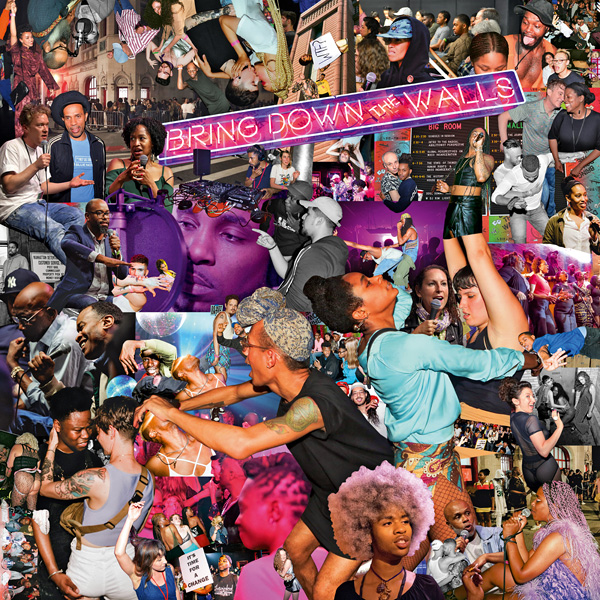 Since the late 1990s, artist Phil Collins has developed a rich body of work across a range of social practices, communities, and geographies to explore how we participate in and understand popular culture. Over the years, his projects have brought us closer to the youth of Baghdad, Kosovan-Albanian refugees, and Palestinian teenagers, to name but a few. What is revealed by the artist’s approach, rooted in a meaningful engagement with people and places, is a nuanced complex of relations embedded in the representational regimes and economies that shape everyday existence, sometimes amidst social or political upheaval. The Montréal public was first introduced to Collins’s work in 2017 with the presentation of his installation free fotolab as part of the Foundation’s group exhibition L’OFFRE. This time, the Foundation dedicates its spaces at 465 Saint-Jean Street to a solo exhibition that focuses on the paramount role of music in Collins’s artistic practice.

the world won’t listen (2004-2007), a three-part video installation that takes as its musical text the 1987 compilation album of the same name by The Smiths, features fans in Colombia, Turkey, and Indonesia as they perform vocals to each song on the album in a series of individual karaoke sessions. Embracing, transforming, and forging new meanings from the songs’ lyrics, their passionate performances gain a new urgency in the light of the continued far-right and anti-immigrant rhetoric espoused by Morrissey, former Smiths frontman.

The single-channel film the meaning of style (2011) features a group of anti-fascist Malay skinheads whom Collins encountered in Penang. Fascinated by their adoption of this typically British subculture, he films them in a series of languorous tableaux set to a dreamlike soundtrack by Welsh musician Gruff Rhys and the band Y Niwl, which reveal the universal desire to belong while staking out zones and modes of independence.

In 2013, Collins collaborated with guests of Gulliver Survival Station for the Homeless in Cologne, Germany. In the center’s cafe, anyone could use a free telephone booth for local or international calls, with the agreement that conversations would be recorded and made anonymous. Selected calls were posted to international musicians, such as David Sylvian, Lætitia Sadier, and Scritti Politti, and served as the starting point for original new tracks. The project resulted in my heart’s in my hand, and my hand is pierced, and my hand’s in the bag, and the bag is shut, and my heart is caught (2013), a sound installation consisting of six specially designed listening booths that each contain a collection of original songs pressed on 7-inch vinyls.

Originating as a public art project, Bring Down The Walls explored the prison-industrial complex in the United States through the lens of house music and nightlife. The project consisted of a communal space that functioned as an open school by day and dance club by night, as well as a benefit album of classic house tracks re-recorded by formerly incarcerated vocalists and electronic musicians. For the exhibition at the Phi Foundation, Collins proposes Bring Down The Walls (2019), an installation version of this project, presented as a world premiere and reconfigured specifically for the Montréal context and the space at 465 Saint-Jean Street, with corresponding public programming that will build on the discussions and relationships that began in New York.

The works in this exhibition explore the emancipatory power of music to transcend time and space, disparate geographies, ethnicity, class, and language while remaining critical of its entanglement with uneven power dynamics and the political economy of culture. Through Collins’s empathic lens and love of a good song, we are offered access to a deeper sense of what it means to relate to one another.

Born in 1970, Phil Collins grew up in the North of England. He studied at the University of Manchester (BA English Literature and BA Drama), and University of Ulster in Belfast (MA Fine Art). During this time he worked different jobs, including a cloakroom boy and pint-puller at the Hacienda nightclub, a bingo caller, a lecturer in performance and film theory, a high-street photo lab assistant, and a secretary at the Big Issue magazine for the homeless.

Recent projects and solo presentations of his work include Metropolitan Arts Centre (MAC), Belfast and Creative Time, New York (both 2018); Museum of Contemporary Art, Cleveland and Manchester International Festival (both 2017); Metropolitan Museum of Art, New York and Museum of Contemporary Art, Chicago (both 2016); Gallery of Modern Art, Glasgow (2015); Museum Ludwig, Cologne (2013); and British Film Institute, London (2011). His works are held in public collections such as, amongst others, Museum of Modern Art and Guggenheim Museum in New York, Tate Gallery in London, Walker Art Center in Minneapolis, Irish Museum of Modern Art in Dublin, and National Gallery of Canada in Ottawa.

Collins currently lives in Berlin and Wuppertal. He is Professor of Video Art and Performance at the Academy of Media Arts in Cologne.

Established in 2007 by Phoebe Greenberg, the Phi Foundation for Contemporary Art, formerly known as DHC/ART, is a non-profit organization dedicated to the presentation of contemporary art. Housed in two heritage buildings Located in the heart of Old Montréal, the Foundation offers programming that has met with critical acclaim both at home and around the world. Each year, the Phi Foundation presents two to three major exhibitions, a series of public events, special collaborative projects and a forward-thinking education and public engagement program. International in scope yet responsive to the Montréal context, the Foundation’s programming is offered free of charge to reinforce its commitment to accessibility, while fostering discussion on how contemporary art is invested with the topics and ideas that reflect and touch our everyday lives.

Opening hours:
Wednesday to Friday from noon to 7 PM
Saturday and Sunday from 11 AM to 6 PM
Free Admission