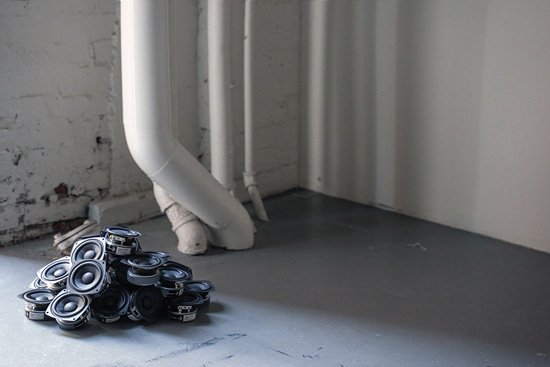 In the 1970s, Canadian composer, R. Murray Schafer, coined the term “schizophonia” to describe the separation of sounds from their sources. Schafer worried that technological means of recording and transmitting sound would generate confusion by displacing sounds from the moments in which they were created – flooding the world with falsities.

The sound installation, Everyonce amplifies Schafer’s anxieties to a critical conclusion by extending its audience’s capacity to listen with extended, technological ears. The groundwork for the installation begins with a free, public workshop on field recording (information here), during which 30 groups of participants are positioned at designated points, all within earshot of a common sound. At Trinity Square Video, 30 speakers are arranged in a pattern identical to the participants’ original positions in space but reduced in scale. The installation will allow visitors to experience multiple points of audition simultaneously, creating an effect that will upend the fictions and altered senses of embodiment that schizophonic media offers. Everyonce is meant to start a conversation about what a listening body is and what it might become in age in which technological media promise to unceasingly extend the senses.

In addition to Akiyama’s intervention, Everyonce will include two additional workshops, both of which will also culminate in sound installations. Activist/artists Dont Rhine and Syrus Marcus Ware will collaborate with members of Toronto’s harm-reduction community, facilitating a series of listening sessions that will examine the state of care amidst growing neoliberal oppression and indifference. Maria Hupfield will introduce workshop participants to the Anishnaabe jingle dress in order to imagine new, listening bodies informed by Indigenous practices and traditions.

Mitchell Akiyama is a Toronto-based scholar, composer, and artist. His eclectic body of work includes writings about sound, metaphors, animals, and media technologies; scores for film and dance; and objects and installations that trouble received ideas about history, perception, and sensory experience. He holds a PhD in communications from McGill University and an MFA from Concordia University and is Assistant Professor of Visual Studies in the Daniels Faculty of Architecture, Landscape, and Design at the University of Toronto.

Syrus Marcus Ware is a Vanier Scholar, a visual artist, community activist, researcher, youth-advocate and educator. For 12 years, he was the Coordinator of the Art Gallery of Ontario Youth Program. Syrus is currently a facilitator/designer for the Cultural Leaders Lab (Toronto Arts Council & The Banff Centre). He is the inaugural artist-in-residence for Daniels Spectrum (2016/2017). Syrus is also a core-team member of Black Lives Matter Toronto.

Maria Hupfield is from the Anishinaabek Nation and a member of Wasauksing First Nation, Ontario, Canada. Her work is currently traveling in the solo exhibit The One Who Keeps on Giving, a production of The Power Plant Contemporary Art Gallery, Toronto, in partnership with Southern Alberta Art Gallery, Lethbridge; Galerie de l’UQAM, Montréal; Mount Saint Vincent University Art Gallery, Halifax; and Canadian Cultural Centre, Paris. In 2018 she was selected for the prestigious Hnatyshyn Foundation award for outstanding achievement by a Canadian mid-career artist.

Jonathan Sterne is James McGill Professor of Culture and Technology in the Department of Art History and Communication Studies at McGill University. He is author of MP3: The Meaning of a Format (Duke 2012), The Audible Past: Cultural Origins of Sound Reproduction (Duke, 2003); and numerous articles on media, technologies and the politics of culture. He is also editor of The Sound Studies Reader (Routledge, 2012) and co-editor of The Participatory Condition in the Digital Age (Minnesota, 2016). His current projects consider the politics of instruments and signal processing; artificial intelligence and culture; and the intersections of disability, technology and perception.

Lilian Radovac is a critical cultural historian whose research focuses on the sensory interfaces between media technologies, social movements and everyday life in the context of North American cities. Her current book manuscript documents the history of New York City’s sound device ordinance, which has amplified processes of gentrification, racialization and resistance from its passage in 1930 to the present day. As lead investigator for Alternative Toronto, she is building a collaborative digital archive of Toronto’s radical, countercultural and trans*/feminist/queer communities of the 1980s.

Ultra-red (Dont Rhine) is an international political sound art collective founded by two AIDS activists in Los Angeles in 1994. After releasing multiple albums and mounting numerous exhibitions, in 2005 Ultra-red research teams in Los Angeles, New York, Berlin, and the U.K. collectively shifted focus from organizing sound to organizing listening; investigating the ways political movements use organized listening to reflect on lived experience, analyze those reflections, and take action to test their analysis. More recently, the Los Angeles Ultra-red team has immersed itself in movement building through the L.A. Tenants Union, founded in 2015, presently with eight neighborhood chapters and close to seven thousand members and supporters.