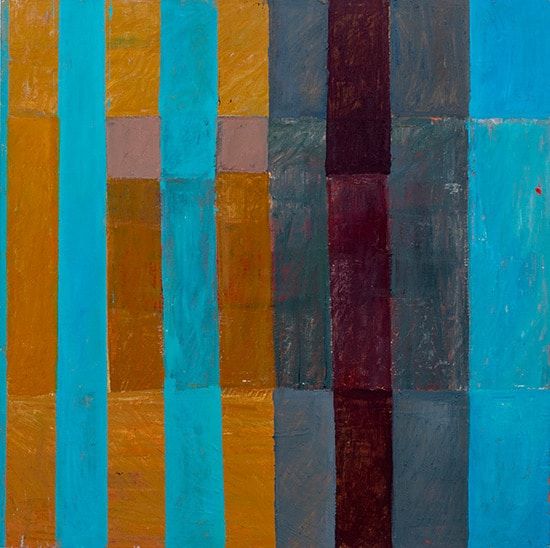 Martha Eleen’s Adaptation is a process-based series of paintings that attempts to make visible the experiential qualities of space that you can’t see, such as temperature, meaning, memory, time, emotion.

These paintings map the connection between the artist’s physical and inner landscapes. By imposing a restriction on observed perspective, the compositions must adapt to shape space using other aspects of visual language: sensation, movement, weather, patterns/rhythms, the changing circumstances of daily life, mood and emotion, vibration.

Adaptation is Eleen’s third body of work investigating the relationship and interdependency of space and place. In The Meaning of Things, 2015, observations of a cardboard box were used to represent a place without socio-political context (unlike buildings and rooms). In Watershed, 2017, the jumping off point was the exterior spaces from the box compositions, but this time there was no subject matter: space without place or meaning.

Martha Eleen is interested in human geography and the relationship between culture and landscape. Her paintings have received critical attention in the form of curatorial essays, reviews and publication such as the The Globe and Mail and Descant magazine. Eleen’s work has been exhibited in public galleries in Canada, U.S.A, Mexico and Japan, and is represented in permanent collections including the Art Gallery of Ontario. She is an Honours graduate of Emily Carr College of Art, Vancouver. Eleen lives in Toronto where she teaches painting and drawing at Toronto School of Art and is represented by Loop Gallery. 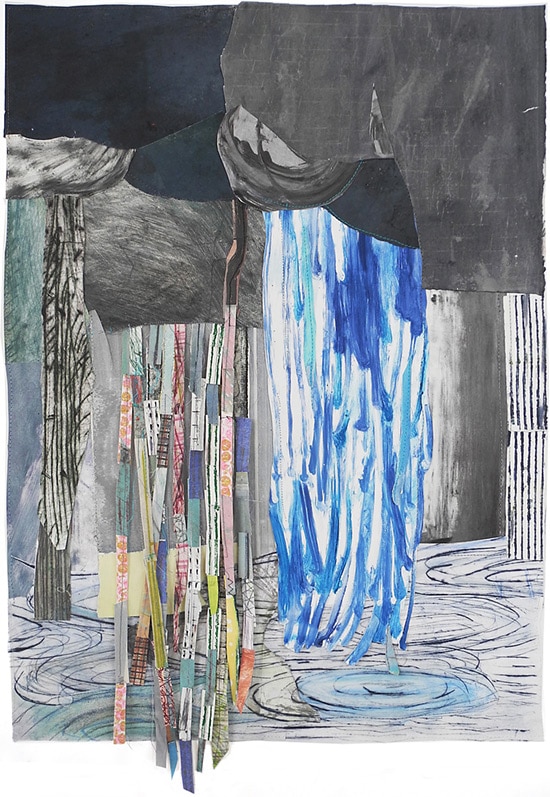 Rarely do I go to the studio with a plan. Instead I show up to work without a specific intention and intuit what to do.

A sense of impending doom weighs on me now and carries into the studio. The specter of climate change and the extreme vulnerability of the planet have been affecting my life. Day-to-day feels unpredictable; living in the country, it’s hard to know what shoes to wear when fields shift from snow to ice, and back to earth in 24 hours. I read and hear constantly about current climate disaster and dark future scenarios.

My workspace is overflowing with bits and pieces of prints I have saved – fragments of my art dating back 40 years. In recycling this work I find my response to catastrophe; sorting through this flotsam, some remnants suggested tears. As a result the collages I made showed an abundance of vertical lines, which led me to musings of rain – lots of rain. Rain and catastrophe evoke the flood, one of the oldest recurring myths of civilization.

The deluge is a traditional story of crisis that dates back to Sumerian times, almost 3000 years ago. The legend of an apocalyptic flood is embraced by most cultures; stories tell of God or gods wishing to cleanse the ways of an errant humanity and an overpopulated earth — often by chance or design, after the flood the world starts anew.

In spite of the dark theme, the weather depicted in Deluge is not apocalyptic, but colourful, whispering hope. It is hard to stay in despair when playing and concentrating in the studio: the act of making is redemptive. One can only hope that collectively we will find creative solutions as we face the climate challenge.

Her early printmaking career began in the venerated Atelier 17 in Paris. Her work has won numerous prizes and is found in private and public collections including London’s Victoria & Albert Museum and the Bibliothèque National de Paris, France. She is a member of Loop Gallery in Toronto, and her monotypes are for sale at Open Studio (Toronto) and at the Art Gallery of Peterborough.

Most recently, in 2018, Jane had a solo show at Visual Arts Clarington, and in 2017, at The AH Centre of Warkworth.

Artist is in attendance on Sundays and for the reception.

The gallery is partially accessible – the front entrance is level, but doors are not automatic. Individuals with mobility issues may have difficulty using the bathroom.