McIntosh Gallery is pleased to present Accountability, an exhibition of work by London, Ontario-based artist, Kelly Greene. Greene is a multi-media artist who works in painting, sculpture, installation, and photography. A Mohawk member of the Six Nations of the Grand River in Ohsweken, Ontario, Greene focuses on topics that include environmental concerns as well as the impact that colonization has had on Canada’s First People. Although she wasn’t raised within her Indigenous heritage, Greene has spent much of her adult life learning about her Haudenosaunee identity.

As she works towards a deeper understanding of her own culture, Greene investigates the multiple ways in which the notion of accountability occurs across key issues affecting Indigenous people. As a nation with its roots in colonization by European settlers, Canada must remain accountable to the history of injustices by honouring past treaties and recognizing the importance of restitution in the healing process. Indigenous people must remain accountable to themselves by taking on the responsibility for keeping their languages and traditions alive and, by passing them on to younger generations, mitigating further loss of vital knowledge and culture. And we must all take on the responsibility of caring for our Earth that sustains us. In her work, Greene makes specific references to the Haldimand Treaty granted to the people of Six Nations, as well as the Mohawk Institute Residential School, or “Mush Hole”, which her Grandmother attended in the 1920s. Greene’s ongoing concern towards increasingly pressing environmental issues has inspired work that represents Earth as Mother, honouring Haudenosaunee belief.

Greene began her visual art studies at the University of New Mexico and went on to earn a BFA from Western University. Her work has been exhibited at the Woodland Cultural Centre (Brantford, Ontario), Saw Gallery (Ottawa, Ontario), Walter Phillips Gallery (Banff, Alberta), Thunder Bay Art Gallery (Thunder Bay, Ontario), Iroquois Indian Museum (Howes Cave, New York), Gary Farmer Gallery (Santa Fe, New Mexico), and others. Greene has been the recipient of grants from the Canada Council for the Arts and the Ontario Arts Council. 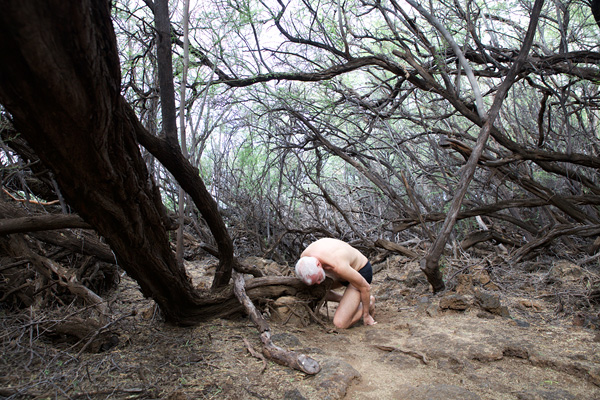 Many of us, especially in Canada, would claim a special relationship with trees and forests. But if we were asked to define that relationship, or to describe our interactions with trees, we might come up short on answers. For the past ten years, Toronto performance artist Johannes Zits has been working with trees around the world. From Cambodia to Cuba, the trees he chooses tend to have unique historical or cultural value within communities. Some have borne witness to horrific human tragedies. Others mark the gradual development of communities as a gathering place or landmark.

Using nonverbal actions, he approaches nature as a body that is alive, vulnerable, and socially contextualized. Instead of making nature a passive backdrop in front of which human history unfolds, his encounters with trees are reflective and empathetic. Aligned with panpsychism, a philosophical world view in which all matter has consciousness, Zits’ practice shares an affinity with cultures in which humanity is seen as continuous with nature. To this end, he often collaborates with local communities to enhance his performances and interactions with trees.

In London, Johannes Zits will be in residence at McIntosh Gallery from March until June. While here, he will be investigating the remnants of an avenue of 160-year-old black walnut trees that, at one time, lined the drive from Western Road to the old Kingsmill house that once stood near Middlesex College at Western University. He will also be researching and interacting with an ancient white oak, possibly 600 years old and called the meeting tree, that is said to have links to the Underground Railroad. His exhibition at the gallery will be completely transformed during the residency by the research he does in London.

A series of talks, workshops and walking tours with Johannes and other guests will be offered so that everyone can participate and learn more meaningful ways to experience nature and listen to trees.

McIntosh Gallery offers free admission to all exhibitions
Monday to Friday: 10 AM – 5 PM
Saturday: 12 PM – 4 PM
We regret that McIntosh Gallery is not wheelchair accessible.