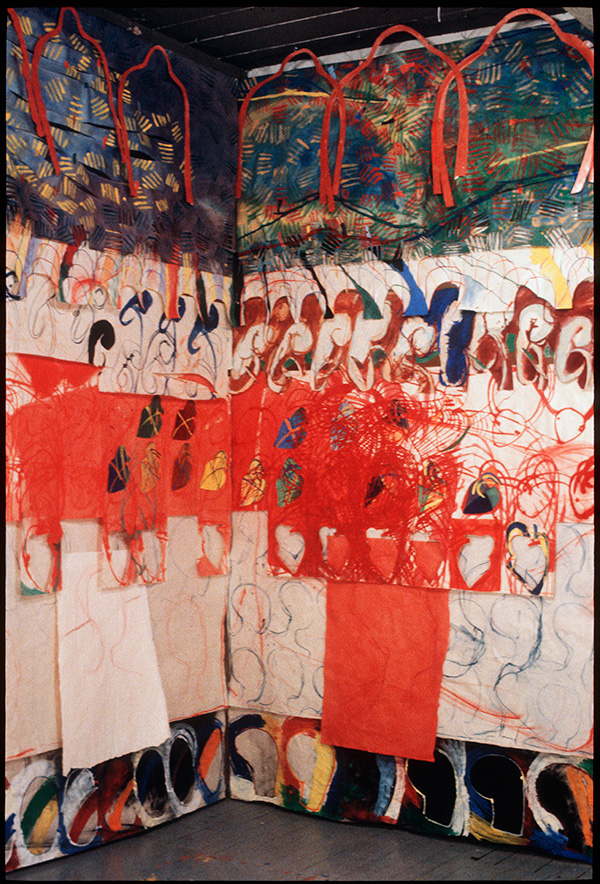 The Red Head Gallery is pleased to present, FATEMAPS, an exhibition by Jack Butler.

FATEMAPS follows the destiny of three extended performative installation drawings at the intersection of developmental biology and visual art – Genesis 1982, The Body as Camera 1993, Vortex 2019.

Genesis is the first work where I consciously followed an expressive aesthetic trajectory away from my scientific research practice as a medical model builder in human embryological development. The installation is an aggregate of these drawings assembled into an independent new work.

The title for the first iteration of Genesis was The Art/Science Painting. Critic and publisher, Robert Enright, titled his descriptive introduction to the original 1983 exhibition catalogue, The Art/Science Tables and the Metaphoric Presence. He described me as a “male Cassandra”, and my visual world as “the embodiment of transformation and symbolic reduction: hearts become cariboo heads, fetus shapes become seahorses, lines scramble into forms, absences become presences. The entire piece is like a prototype for a mural, or a tapestry design, full of repeated images and lyrical traceries. … The painting is less about focus than about poetic associations. It is a kind of wonderfully disorganised catalogue, out of which the viewer can order pattern, symbol, meaning and other staples of comprehension.” Following the trajectory for my work established in Genesis, The Body as Camera, 1993, is a very personal sketchbook where I move from drawing images of the body to imaging on the body – drawing directly on the face.

Behind my published research (Before Sexual Difference, The Art and Science of Genital Embryogenesis, Leonardo, 1993) lay a series of graphic experiments: drawing diagrammatic reductions of my embryological research findings directly on the face, making this most critical bodily transformation dramatically visible. I worked this drawing project in collaboration with other artists while in residence at the Banff Centre. For example, I drew on Dennis W’s face and photographed the drawing with polaroid film. Dennis then copied the photographed image drawing it on my face, thus bringing into play the issues of identity and mimicry, invoking the theory of The Skin Ego – the bodily ego experienced on the skin.

In 1989, French psychoanalyst, Didier Anzieu suggested that the ego can be identified with the body and can be experienced in terms of the skin. He related these notions to fantasy body representations. I am using Anzieu’s theory as a metaphor in the analysis of my own art/science work. It is that shifting zone between the bodily and psychic skins – the boundary /barrier that is at once permeable and a containing envelope, that motivates my visual play (The Body as Camera sketchbook).

Vortex 2019, the current iteration of FATEMAPS, enacts the biological pull into being, a new life, and the drive to death. Vortex is a diptych drawn in collaboration with artist Johannes Zits. I photographed Johannes while he performed/drew the vortex in white sand on the black floor of his studio. I drew, with white paint, a double image of the vortex – of life and of death, over a fragment of my woodcut print that reveals as it obscures the embryological moment of sexual divergence. The photograph of Johannes and my drawing of the double vortex are joined to form the diptych.

The Red Head Gallery was established in 1990 and is Toronto’s most enduring collectively run art gallery. It has stood the test of time as an exhibition space as well as a collective where critically engaged, highly productive artists enjoy curatorial control over the presentation of their work. Over the past two decades more than 100 artists have been part of The Red Head Gallery and have produced over 200 exhibitions.