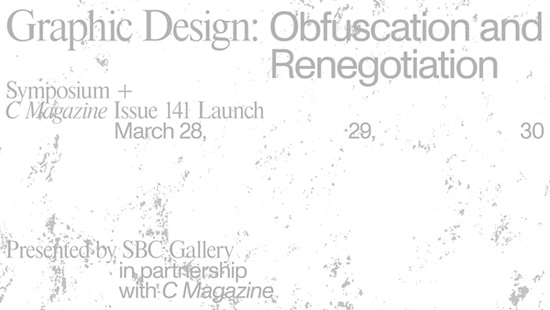 Presented by SBC Gallery in partnership with C Magazine

Because of the ways graphic design is often misrecognized (…) we attempt to sidestep some of the anxious discourses of our field, such as: What can design do (to make things “better”)? How can design solve our problems? (…) In essence, this issue is an attempt to ask quite earnestly, what does design do? How is design entangled with power and how does it manifest its impositions?
– Chris Lee and Ali Shamas Qadeer

Guest-edited by Loosely Assembled Cycle 1 artists Chris Lee and Ali Shamas Qadeer, C Magazine Issue 141 frames graphic design as a “visual practice that gives form to power and shapes ways of knowing.” To celebrate the launch of this issue, we’ve assembled a series of talks and workshops that examine the ways in which graphic design is used: to undermine and/or uphold colonial and capitalist narratives of power, to create and/or dismantle communities, to validate and/or discard knowledge and information.

The conferences is held in English and there will be whisper translation available in French.

“What do we mean when we talk about modern Canada? Hockey. Multiculturalism. Natural vistas. Global cities. Humanitarians. And above all, friendly people. Greg Durrell’s documentary film, Design Canada, is about all of those things and the role graphic design played in forging them. But the film is not only that; it is also a fascinating—if unintentional—look at a world where Canada’s colonial project hides in plain sight.” Michèle Champagne presents a meander through her review of Greg Durrell’s Design Canada (2018) in Issue 141. Durrell’s feature film is a documentary rife with untold stories, as well as a specimen of dominant colonial fictions—repackaged with progressive plots, modern views, and happy tunes.

Designers and educators Chris Lee and Ali Shamas Qadeer will discuss the world of the document: the designed, bureaucratic “form” and other such objects that exist in what theorist Lisa Gitelman refers to as the Scriptural Economy. Gitelman’s research considers the ways that printed, reproducible forms (such as medical intake sheets, applications, etc) are central to the creation of culture, the production of knowledge and the reification of information. What agency/subjectivity do designers have in the creation of the document as a design genre?

Join Lee, Qadeer and guests for an informal Q+A, followed by a reception

Should we see Cree Syllabics as a collaboration between colonizers/invaders, or as something taken away from us that we are taking back? How are oral traditions in indigenous cultures taken at face value, and when and by whom are they questioned? Drawing from and expanding on Joi Arcand and Dr. Wheeler’s text for C magazine, Aubin will discuss his recent work creating a free, open-source Cree font, and speaking to his family’s own complex history with Cree syllabics.

19:15 – 20:15 – Kalpana Subramanian – Entangled Visions: The Birth of a Radical Pedagogy of Design in India

Artist and filmmaker Kalpana Subramanian will revisit the entanglement of forces of the German Bauhaus and anti-colonialism in the early 20th century in India that affected the formation of India’s first design school post independence. The founding legacy of the National Institute of Design (NID), Ahmedabad, is a story of diverse modernisms that coalesced to shape a radical pedagogy of design in India. Based on the legendary India Report (1958) by Charles and Ray Eames, NID is testament to a transcultural humanist vision of design that is perhaps more relevant today than it has ever been.

Join Lee, Qadeer and guests for an informal Q+A, followed by a reception

Join SBC and C Magazine and invited artists for a celebration of the launch of Issue 141. Copies of the issue will be available for purchase.

For this workshop, LaRochelle will draw from Qadeer and Lee’s conversations on design and power, as well as L.A. Cycle 1 artists Collective Question’s interrogation of the Tolstoy College. LaRochelle’s Queering The Map project emerged out of a desire to position queer ‘experience’ as equal to ‘Theory’ or ‘History’, giving further weight to the ways in which queer life is formed by and informs the production of space, while working to destabilize the academic, authorial/authoritative voice.

Expanding on Tolstoy College’s interest in “subjective experience, emotions, and feelings” this workshop will see participants utilizing content from Queering The Map, an expansive community-generated spatial archive of queer experience, in order to create their own experimental “syllabi of/for queer feeling”. Through conversation and collective design, these syllabi will be published as a series of posters available for printing on and offsite following the workshop, displayed in the exhibition, and archived on the INDEX web platform, created for Loosely Assembled.

SBC Gallery is an accessible space.

C Magazine is an international art quarterly devoted to promoting critical discussion about contemporary art. Based in Toronto, with contributors around the world, C Magazine explores ideas about visual culture in a way that is educational, informative and thought-provoking. C Magazine is published by C The Visual Arts Foundation, a registered charitable organization established to present ideas, advance education and document contemporary visual art and artist culture. We acknowledge the financial support of the Government of Canada, the Canada Council for the Arts and the Ontario Arts Council. You can support C Magazine by making a donation at canadahelps.org or through our office.